Congressman: ‘Move up or move out’ 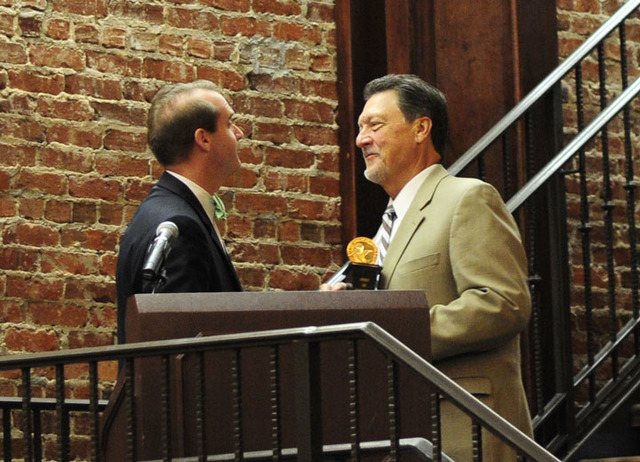 The congressman, who is leaving office after finishing his third term at the end of the year, spoke about several topics, including the importance of the coming presidential election and its impact of the Supreme Court, tying it in to his decision to step down.

He told attendees he has enjoyed his 12 years in the House.

“It’s been 12 long years, but it seems like it was just yesterday that I took my oath of office,” he said. “It went by in a flash, and that reminds us as we get older that the time clock gets faster.”

Everyone has an expiration date, Westmoreland said, not just physical, but expiration dates in life when it’s time to “move up or move out.” He made the decision to step down after 12 years because he felt it was time, and made a jab at some congressmen who have served for decades, saying they “reached their expiration date years ago.”

“They may not have met their physical expiration date, but mentally they are stuck in the ’60s, ’70s,” he said.

The November election is critical, he noted, adding the designation has been used to describe many elections in the past, but this time it truly applies.

He was referring to the decision of filling the vacancy of Supreme Court Justice Antonin Scalia, who died in February. President Barack Obama nominated federal judge Merrick Garland, but the Senate has denied a confirmation hearing for the nominee, instead opting to wait for the next president’s nominee.

Westmoreland noted that the life expectancy at the time was about 49 years old, so the Founding Fathers couldn’t have anticipated life terms for Supreme Court justices stretching decades. That means a single justice potentially influences generations to come.

“For my kids and my grandkids, and their children, I’m not looking at this being a four-year enrollment,” he said of the presidential election. “I’m looking at something that will be there for generations.”

He stressed the court is critical due to its duty to legally uphold the Constitution of the United States. He said the words of the Constitution “have gotten blurred” as people’s interpretations differ.

“But they are plainly written. We need to get back to that,” he said. “… We shouldn’t be selfish (in making a choice). We need to think about what we need for our country, our Constitution for future generations. It’s not about us.”

At the top of Tuesday’s meeting, Westmoreland was awarded at the top of the meeting with the Spirit of Entrepreneurship award by Moore Hallmark from the U.S. Chamber of Commerce for his pro-business voting record.