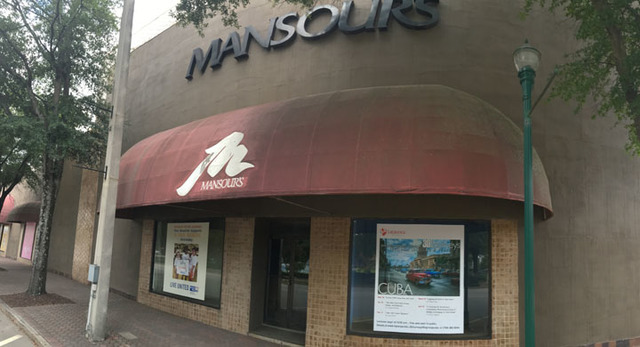 LaGRANGE — It looks like there may finally be some movement on the stalled downtown hotel project.

City Council on Tuesday approved an agreement that hands over the city-owned former Mansour’s property at 25 W. Lafayette Square to the Downtown LaGrange Development Authority, or DLDA.

The move paves the way for the DLDA to then transfer the property to the developer, Paramount LaGrange. Along with the handover of the property, the city is contributing $321,780 toward demolition of the existing building.

“The long-awaited hotel project, I think, is about to finally happen,” Mayor Jim Thornton said at a Council work session. “Everything on their (Paramount LaGrange) end is ready to go.”

Demolition of the building could come within the next four to six weeks, according to Bobby Carmichael, executive director of the DLDA. Before demolition can begin, the developer must give the Georgia Environmental Protection Division 10 days’ notice because of asbestos inside the building.

City Manager Meg Kelsey said removal of sidewalks and trees lining the building should begin within a week. Fencing will go up around the building and parking will be closed on the sides facing Lafayette Square, Vernon and Broad streets.

Kelsey told the Daily News she was “very confident” the project would see traction next week.

Some additional provisions were added to the agreement signed Tuesday. The city has agreed to pay up to 50 percent — but not more than $50,000 — toward soil remediation if the ground underneath the former Mansour’s building is determined to be unusable. Should remediation costs exceed $50,000, the city and Paramount LaGrange have the right to renegotiate the agreement, or walk away from it entirely. Carmichael indicated Tuesday that none of the involved parties believe heavy remediation will be likely.

The city has also agreed to use a portion of hotel-motel taxes collected specifically at the hotel to maintain the exterior of the building along with the adjacent 200-car parking deck. Under the agreement, the city may also use the maintenance fund to recondition or repair the hotel’s lobby if wear and tear occur from people passing through it from the parking deck to Lafayette Square. The maintenance fund is not to exceed $250,000 in holdings, and is voided if the hotel is sold to a third party, or when the tax allocation district, which is partially funding the hotel, expires.

The city will fund the hotel to the tune of $2.75 million using the tax allocation district. The DLDA will act as the conduit of the money and the city will purchase the note, which has a fixed interest rate of 3.5 percent. The debt will be repaid using ad valorem taxes collected from the hotel.

The parking deck will be financed through a $4 million grant from the Callaway Foundation to the DLDA. The city will own the deck, which will be available for hotel customers and the general public. If parking for hotel guests becomes inadequate, the city has the ability to lease spaces to the hotel’s developer. Speer Burdette, president of the Callaway Foundation, said Tuesday at a DLDA meeting that it is a condition of the $4 million grant that the deck remain open to the public for free parking.

The approximately 90-room hotel will employee about 30 people and have various amenities including a pool, fitness room, bar and restaurant.

Construction of the hotel and parking deck is expected to take about 15 months and open in late 2017, according to DLDA director Carmichael.

Once the former Mansour’s building is demolished, the site will be graded and construction on the parking deck will begin first, Carmichael added. The hotel’s construction will follow.

Additionally, the parking lot behind Solomon’s Department Store on Bull Street is expected to be completed by Oct. 6, according to Callaway Foundation president Burdette.

Architectural renderings show the proposed design of the new downtown Courtyard Marriott hotel. At top, the square-facing facade is shown; at bottom, the rear, which faces a proposed parking deck, is shown.

http://lagrangenews.com/wp-content/uploads/sites/37/2016/08/web1_HotelUpdateRenderCMYK.jpgArchitectural renderings show the proposed design of the new downtown Courtyard Marriott hotel. At top, the square-facing facade is shown; at bottom, the rear, which faces a proposed parking deck, is shown.

The former Mansour’s department store at 25 W. Lafayette Square. LaGrange City Council on Tuesday approved an agreement that hands over the city-owned former Mansour’s property and contribute $321,780 toward demolition of the existing building.

http://lagrangenews.com/wp-content/uploads/sites/37/2016/08/web1_web0810Mansours.jpgThe former Mansour’s department store at 25 W. Lafayette Square. LaGrange City Council on Tuesday approved an agreement that hands over the city-owned former Mansour’s property and contribute $321,780 toward demolition of the existing building.