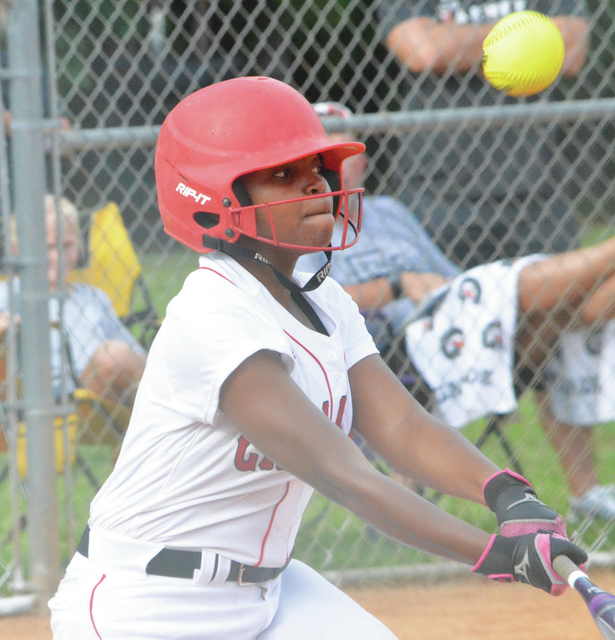 HOGANSVILLE – In a back-and-forth season opener, it was the Callaway High softball team rallying for a 7-6 home victory over Troup on Tuesday.

Troup fought back from a two-run deficit to take a 6-3 lead in the top of the fifth inning, but Callaway answered with a single run in the bottom of the fifth and three more in the sixth to surge back ahead.

Callaway sophomore pitcher Oeisha Jenkins, with the help of a game-ending double play, set Troup down in the top of the seventh and Callaway hung on for the win.

“We just competed at the plate,” Callaway coach Ashley Summerlin said. “We had a lot of hits, got some bunts down, moved runners when we needed to move runners, we ran the bases well. I’m very happy after that win.”

Troup was unable to get much going offensively through the first four innings, but it broke through for four hits and four runs in the fifth.

“Early in the game, we struggled. It’s just a lack of not seeing a whole lot of pitching,” Troup head coach Mason Brackett said. “We came around in the later innings. I felt like we ran the bases well, and we were more selective later in the game.”

Jenkins, who figures to be Callaway’s primary pitcher this season after getting significant time on the mound as a freshman, tossed a complete game.

Outside of the difficult fifth inning, Jenkins was sharp, and she held Troup scoreless over the final two innings.

“Oeisha did her job on the mound,” Summerlin said. “She’s going to get better every time.”

For Troup, freshman Lauren Brooks went the distance in her first high-school game.

“She did a really good job for a freshman in a big game,” Brackett said.

Troup jumped out to a 1-0 lead in the top of the first inning.

Kayla Lane walked, and she later scored on a Madison McCartney double.

Callaway answered with two runs of its own in the bottom of the first.

Kelly Carlisle led off with a base hit and KeKe Talley walked, and Jenkins tied the game with a double before Skylar Rice’s RBI groundout gave Callaway the 2-1 lead.

Callaway added an insurance run in the fourth inning.

Lydia Bartlett and Kourtney Greer had back-to-back singles and Jasmine Dukes walked to load the bases, and Leijorey Sanders had an RBI single to make it a 3-1 game.

With the bases still loaded with one out in the fourth, Brooks did a nice job for Troup of getting out of trouble with no more runs scoring.

Lane got things started with a double, and Abby Taylor followed with a triple to cut Callaway’s lead to one.

Next to the plate was Maddie Weathers, and she served a two-strike pitch into left field for a double to tie the game.

McCartney then came through with an RBI triple to give the Lady Tigers the lead, and Andrea Nix got a bunt down to drive in another run, and Troup led 5-3.

With two outs, Skye Loftin reached on an error, and the fourth and final run of the inning crossed the plate, and Troup’s lead was 6-3.

Callaway got one of those runs back in the bottom of the fifth.

With two outs, Bartlett hit a ball hard that deflected off of an outfielder’s glove for an error, and Talley scored the unearned run.

Troup threatened to add to its lead in the top of the sixth, but Callaway turned a double play to keep it a two-run game.

With one out and a runner on second, Carlisle fielded a grounder at shortstop, and she tagged the base runner for the second out before whipping a throw to first to complete the double play.

Callaway then reclaimed the lead in the bottom of the sixth.

Jasmine Dukes got things started with a triple, and Sanders legged out an infield single to drive in a run.

Acia Stevens, the number nine hitter, got a sacrifice bunt down to put the tying run on second with one out.

Carlisle followed with a base hit, and Sanders came home with the tying run.

Next up was Talley, and she did her job with an RBI groundout, and Callaway had a one-run lead.

In the top of the seventh, Kinley Stanford reached on a one-out single before Callaway turned another double play.

Carlisle fielded the ball and tossed it to Greer, and she rifled the ball to Skylar Rice at first base for the game-ending double play.

“It was a complete team win,” Summerlin said.

Callaway and Troup will both be in action again on Thursday.

Callaway will host Sandy Creek, and Troup will open its Region 5-AAAA schedule with a game at Chapel Hill.

LAGRANGE – It’s been a big summer for the Thompson family. Last week, Skip Thompson was the head coach for... read more