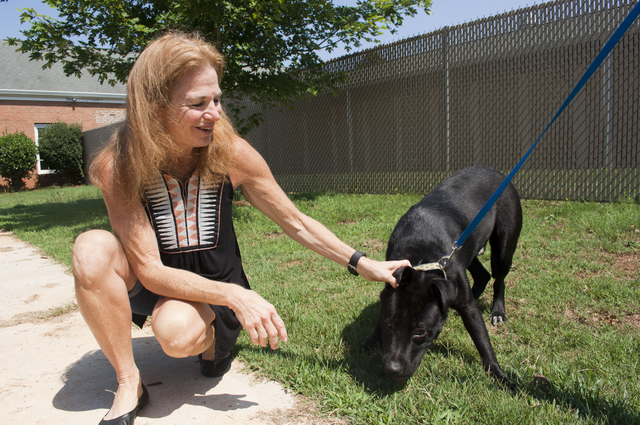 Since March 28, a black lab named Shadow has sat at the LaGrange Animal Shelter on Orchard Hill Road and watched as nearly two dozen of his canine compadres have left with smiling new owners.

Linda Couto, manager of the LaGrange-Troup County Humans Society, is hoping to change that.

“He’s just the sweetest little guy, and we don’t know why no one has adopted him,” she said during an interview Thursday. “He’s neutered, he’s up to date on his shots, and he’s ready to go.”

Shadow was picked up as a stray in LaGrange, Couto said, and has been housed in one of the kennels used by the Humane Society ever since. LaGrange Animal Control allows the local Humane Society to run six kennels at the pound near the industrial park, and the group is licensed to host up to 20 dogs at a time, Couto said.

There’s a $75 fee to adopt a dog, which includes spaying or neutering, microchipping and vaccinations. There’s also a 30-day insurance plan that comes with each animal, so if the animal becomes ill or needs veterinary care, the owner is covered for the first month of pet ownership.

Couto is optimistic that deal might entice someone to give Shadow a new home.

“He loves going for walks on his harness, and he’s got a great personality,” she said. “He’s going to make a great pet for someone.”

The LaGrange-Troup County Humane Society is located at 1390 Orchard Hill Road in LaGrange, and can be reached by calling 706-298-3608. Check the society’s Facebook page at www.facebook.com/LaGrangeHumaneSociety for updates about adoptable pets and other information.

Linda Couto, manager of the LaGrange-Troup County Humane Society, plays with Shadow, an adoptable lab mix, at the LaGrange Animal Shelter on Thursday. Shadow has been at the shelter since March 28.

http://lagrangenews.com/wp-content/uploads/sites/37/2016/08/web1_Shadow01WEB-1.jpgLinda Couto, manager of the LaGrange-Troup County Humane Society, plays with Shadow, an adoptable lab mix, at the LaGrange Animal Shelter on Thursday. Shadow has been at the shelter since March 28.