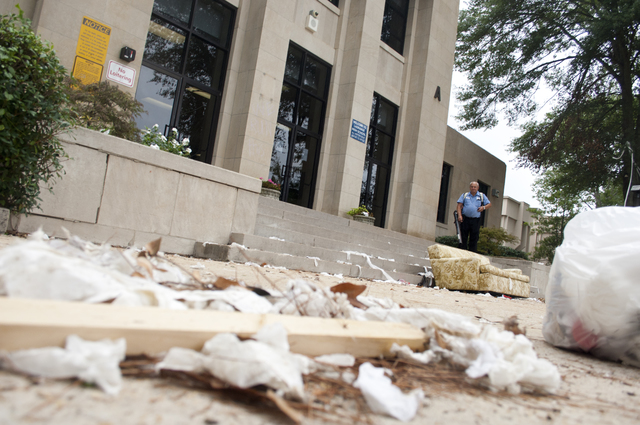 On the first day of their senior year Wednesday, LaGrange High School’s graduating class of 2017 did what so many before them have in the past: the infamous senior prank.

This year’s prank took the form of toilet paper — hanging in trees, strewn on the front steps and in parking lots. It might not be the most creative prank, but even a custodian cleaning outside called it “a little funny.”

Although the custodian was helping clean, school officials told staff to leave it to the senior pranksters who were charged with cleaning up the mess — which they did. The seniors, the last class born in the 1990s, were going with the theme “party like it’s 1999.”

Just up the steps and inside the 1947-built school, students flooded into the narrow hallways, beckoned there by a chiming tone that sets the day’s pace. Of course, none of the students the Daily News spoke to knew anything about how the toilet paper wound up so high in the elm and pine trees that adorn the front lawn.

But there is someone who does know a thing or two about senior pranks, though: LHS assistant principal Kay Thompson.

“One year, they put ‘For Sale’ signs up all across the front of the building,” Thompson said with a laugh. “That one was funny.”

About 10 or 15 years ago, the seniors went out and bought heavy-duty chains and padlocked all the doors shut. The principal at the time, Steve Cole, had to find a pair of bolt cutters to open the school for students’ first day back after the summer break.

DeAnn Smith has managed the chaos that is the school’s front office since 1999, and seen her fair share of senior pranks. She remembered one time when the students smeared petroleum jelly on all the door handles.

“That one was pretty funny,” she said in between helping a new freshman, Corey Hyatt, figure out which bus route he’d take to get home Wednesday afternoon.

Halfway through his first day at school, Hyatt said it was going well, and he thought the prank was humorous, but he was more excited about joining the Future Farmers of America club, he said. That might be a good fit at LaGrange High, given its mascot, the Granger — or farmer.

One year, the prank fit, too. The seniors bought mountains of hay and spread it across the senior parking lot across North Greenwood Street from the school, Thompson said. It was an homage to the school’s overalls-clad symbol.

Some of the other practical jokes have been a bit more challenging. Thompson said one year the students put a couch in a tree, and a year or two ago, the students trucked in a generous helping of sand and turned the front parking lot into a beach. They had kiddie pools and everything, Thompson said.

It’s all in good fun, and even the school’s teachers get a laugh out of the annual tradition — the only time it gets under Thompson’s skin is when the mischief could be dangerous.

“One year, they got up on top of the building somehow and hung a big sign,” she said. “That made me a little nervous. I still don’t know how they got up there.”

No doubt the class of 2018 is already plotting their comical caper, but they’ll have to wait their turn. After all, it’s a tradition.

Note: This story was updated Thursday morning to correct that students were charged with cleaning up the toilet paper, not custodial staff.

Toilet paper litters the ground at LaGrange High School thrown by students from the graduating class of 2017 on the first day of their senior year. The seniors were charged with cleaning up the mess. Senior pranks have been a long-standing tradition at the high school, which was founded in 1903 and located to the current building in 1947.

http://lagrangenews.com/wp-content/uploads/sites/37/2016/08/web1_LHSPrank01WEB-4.jpgToilet paper litters the ground at LaGrange High School thrown by students from the graduating class of 2017 on the first day of their senior year. The seniors were charged with cleaning up the mess. Senior pranks have been a long-standing tradition at the high school, which was founded in 1903 and located to the current building in 1947.