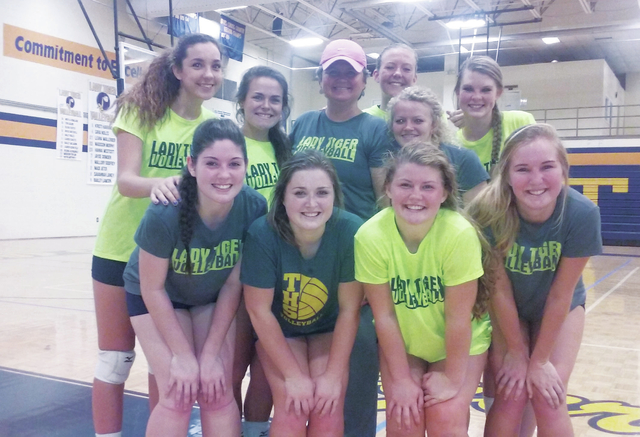 LAGRANGE – Troup volleyball coach Jodi Dowden doesn’t see any reason to shy away from a challenge.

For the third consecutive season, Troup took on a powerful Columbus High team in a preseason game.

Dowden figures playing a team the caliber of Columbus can only help her players as they get ready for a new season.

“They’re a phenomenal team,” Dowden said of Columbus, which is coming off a state-championship season. “I like to know where we need to be, and what we’re shooting for.”

Troup hung tough with Columbus in both games, and it was even leading late in the second game before falling short.

“We can hang with them a little bit,” Dowden said. “Obviously they out-size us. But it gives us an opportunity to try to come out and understand where our game needs to be.”

In the second game, Troup was up by as many as three points in the latter stages, but Columbus was able to regroup and take the win.

Troup heads into the regular season feeling good about its prospects.

It’s a veteran team with eight seniors leading the way.

Among those seniors is Jodi Dowden’s daughter, Jayde Dowden, who was an all-region player last season.

“We’re hoping to call on same of that experience, and hopefully have a really good season,” Jodi Dowden said. “We’re excited to get into the season.”

Troup will begin its area schedule in September, and she hopes the team is peaking by the time the area tournament rolls around in October.

“It’s not where you start out, it’s where you end up,” Dowden said. “And we’re going to get better.”

While there is plenty of experience with the eight seniors, Dowden said there are a number of newcomers to the lineup as well.

“Even though we have experience, we also have some new players,” Dowden said. “They have a lot of growth that’s giong to come as the season goes along.”