Callaway reconnects with its roots 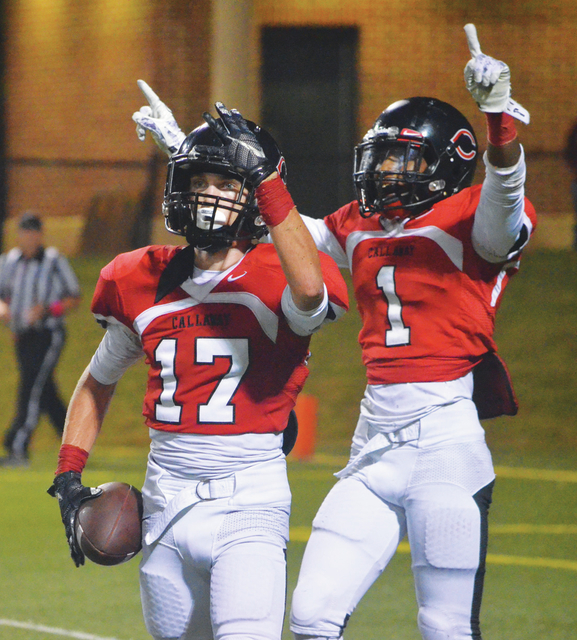 HOGANSVILLE – They’re going back to Hogansville.

For the 12th consecutive year, the Callaway Cavaliers will host a preseason game in Hogansville, and once again they’ll be playing under the lights at Hendrix Field.

Hendrix Field was the home of the Hogansville High football team for decades, but that school closed its doors in the spring of 1996.

When Pete Wiggins took over as head coach before the 2005 season, he wanted to play a game in Hogansville, so Callaway faced Carver in a preseason game that year at Hendrix Field.

Callaway has played a preseason game in Hogansville every year since then, and that trend will continue on Friday with Northside-Columbus coming calling for a 7:30 p.m. kickoff.

“It’s fun to go play in that stadium where there’s so much tradition,” Wiggins said. “We’ve had a lot of great games over there, some really competitive games.”

In addition to playing Carver, Callaway has also faced Shaw and Greenville in the preseason game, and now it’ll be playing Northside for the first time in Hogansville.

Northside, which finished second in its region last season, figures to be a quality opponent.

“It’s going to be a great competition,” Wiggins said. “They’re a AAAAA school, and they had a really good season last year. Coach (Morgan) Ingram does a great job with his kids. It’s going to be tough on us. But I feel like we’ll get better from it, and we’ll see where we’re at. There’ll be mistakes we have to work on, but that’s part of it, and I hope it’ll help prepare us for the opening week, and just help us evaluate where we’re at.”

“It brings back a lot of memories,” Hubbard said. “It’s been a long time since I was there.”

Hubbard said the first game back at Hendrix Field in 2005 was especially emotional with so many people associated with Hogansville High in attendance, including Cummings, who died in 2013.

Cummings was the head coach at Hogansville for eight years and six years at Callaway before stepping down following the 2001 season.

“The first time was really nostalgic,”Hubbard said. “It’s always nice. It’s nice to give back to that community. We always have a good turnout, and I think it means a lot to those people in Hogansville.”

Tray Tucker, who was the equipment manager at Hogansville before taking on that same responsibility at Callaway, said the tradition at Hendrix Field “is unbelievable.”

“That place filled up,” Tucker said. “The people of Hogansville came out and supported it. There was nothing like it.”

Tucker recalls one year when Callaway’s players wore green uniforms, reminiscent of the colors worn by the Hogansville teams.

“That year that we wore green, we had former football players there with tears in their eyes,” Tucker said. “Nobody knew it. We had them packed away. Me and (Wiggins) knew it. The players didn’t know it. The coaches didn’t even know it. We changed back behind that gym.”

Tucker added that the game “means a lot to the community, to the people that went to Hogansville.”

As for the game, it’s an important step in the preparation process for the Cavaliers.

Callaway hasn’t faced another team in a game setting since losing to Westminster in the second round of the state playoffs last season.

Callaway jumps into a new season on Aug. 19 when it plays LaGrange for the third straight year.

“For me, you get there, and once the game starts it’s just a game,” Hubbard said. “We’re trying to evaluate and get better. That’s what I’m looking forward to really. I’m anxious to see a lot of our guys play.”

Callaway defensive coordinator Dusty Hubbard, a Hogansville High graduate, yells out instruction during practice last week. Callaway will be in Hogansville for a preseason game on Friday against Northside-Columbus. Kevin Eckleberry | Daily News

http://lagrangenews.com/wp-content/uploads/sites/37/2016/08/web1_CHS1-1.jpgCallaway defensive coordinator Dusty Hubbard, a Hogansville High graduate, yells out instruction during practice last week. Callaway will be in Hogansville for a preseason game on Friday against Northside-Columbus. Kevin Eckleberry | Daily News

Pete Wiggins, keeping an eye on things in practice, is heading into his 12th season as Callaway’s head coach. Kevin Eckleberry | Daily News

http://lagrangenews.com/wp-content/uploads/sites/37/2016/08/web1_CHS2.jpgPete Wiggins, keeping an eye on things in practice, is heading into his 12th season as Callaway’s head coach. Kevin Eckleberry | Daily News