Team Georgia one win away from championship 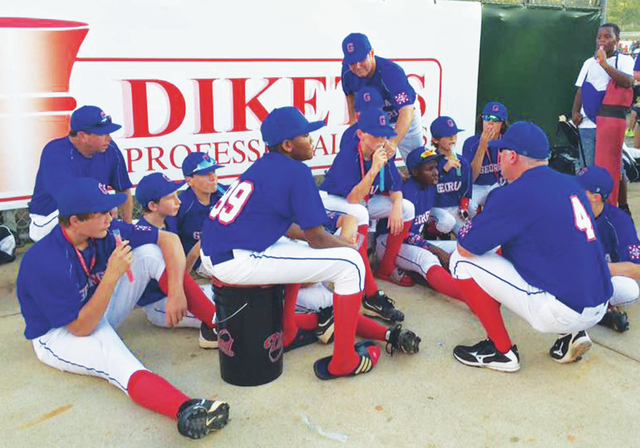 The Hogansville all-stars began their summer season in early June when they got together for their first practice, and they went on to win the district and state championships to earn an invitation to the Dixie Youth Baseball 11-12-year-old World Series.

Hogansville, or team Georgia as it is now known, has kept up the winning ways in the World Series, and it will play one game this morning for the championship.

Georgia could have wrapped up the title Wednesday evening, but despite a dramatic final-inning comeback, it fell to Alabama 7-6.

Georgia and Alabama both have one loss in the double-elimination tournament, and they will play for the title today at 9 a.m. Central Time.

Georgia won its first four World Series games, and that included a 3-0 victory over Alabama on Tuesday when Nathan Karvelas threw a six-inning shutout.

Georgia followed that up with a 4-2 win over Texas on Wednesday morning, and that propelled the team into the championship round against Alabama.

Alabama, which beat Florida earlier on Wednesday to keep its title hopes alive, jumped out to a 7-1 lead against Georgia heading into the sixth and final inning.

Chase Williams walked, and two batters later, Zack Thompson brought him in with a double, and it was a 7-2 game.

After a Nate Lee single put runners on the corners, Tre Mosley’s base hit trimmed Alabama’s lead to 7-3.

Following a pitching change, Brett Haynes stepped to the plate with two men on, and he powered the ball over the outfield fence for a three-run home run, and just like that Georgia was within one.

Alabama’s pitcher was able to get a pop-out to end it, though, and Georgia’s comeback bid fell just short.

Georgia scored its other run in the second inning when Haynes singled and later scored on a wild pitch.

Alabama took the lead with three runs in the third inning, and it added single runs in the fourth and fifth innings.

In Wednesday’s first game against Texas, Williams delivered a stellar pitching performance, going the full six innings to get the win.

Mosley was one of the stars of the game for Georgia with a home run, and he robbed a Texas player of a home run when he made a sensational over-the-fence catch in the sixth inning.

That catch proved to be especially important when Texas loaded the bases before Landon Turner Tucker caught a flyball in right field for the final out.

Texas took a 1-0 lead after one inning, and Georgia tied it with a run in the top of the second.

Ben Alford singled and Hayes was hit by a pitch, and Trey Hartley tied it with a single.

Georgia took the lead in the third inning.

Daniel Martin reached on a one-out double, and he scored on Thompson’s groundout and Georgia led 2-1.

Leading off the inning, Mosley blasted the ball over the fence for a home run, giving Georgia a 3-1 lead.

Haynes reached on a one-out single, and he moved to third on a Hartley base hit before scoring on a wild pitch, and Georgia was up 4-1.

Texas got one of those runs back on a home run in the fifth inning, but it was held scoreless the rest of the way by Williams.

OF NOTE: Today’s championship game will be streamed live at jockjiveyouth.net