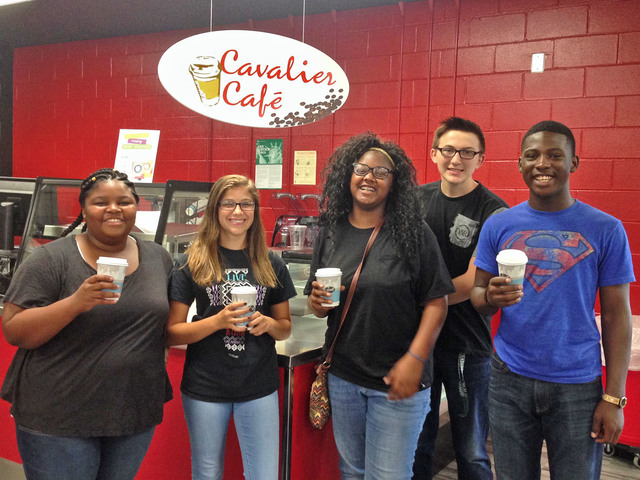 HOGANSVILLE — When students at Callaway High School started school on Wednesday, they were greeted by a new lunchroom and new programs.

“Teachers and students, everybody in the cafeteria staff, everybody had a hand in designing this,” said Jonathan Laney, the principal at Callaway. “It’s very, very exciting. We’re proud of it. I know that. The kids, they were in awe.”

“It looks great,” said Alvins Stephens, a student at Callaway. “And there is a marching band on the wall.”

More than just the lunchroom is new this year. The school is also restarting its agriculture program, which was closed for several years.

“The kids are excited,” said Robin Chandler, the new agriculture teacher. “I think that’s the main thing that excites me. I have kids planning fundraisers so that they can go on field trips to farms. We’re going to have a plant sale in the spring.”

Laney estimates there are 140 students in the new agriculture program, which includes floral design, basic agriculture and horticulture. The school is also restarting its Future Farmers of America program.

Along with agriculture, the school has also made a point to increase participation in the fine arts, with an about 50 percent increase in participation since last year. The school will even be working with the Secretary of State Student Ambassador Program starting in September.

“The Secretary of State Student Ambassador Program will teach them about voting and try to get kids interested in voting and get them registered to vote,” said Heather Brooks, a history teacher at the school.

Even the teacher training has undergone improvements for the new school year, with the introduction of rigor and relevance training throughout the school system.

“We’ve got to think outside the box, and prepare students for their future,” said Lynne Short, CTAE director and assistant principal. “It just solidifies why I’m in this profession, and it’s all about the kids and how the kids move forward. So, I’m really glad that the system has invested the time and the money and the energy into giving all Troup County (schools) employees that professional learning.”

By Alicia B Hill