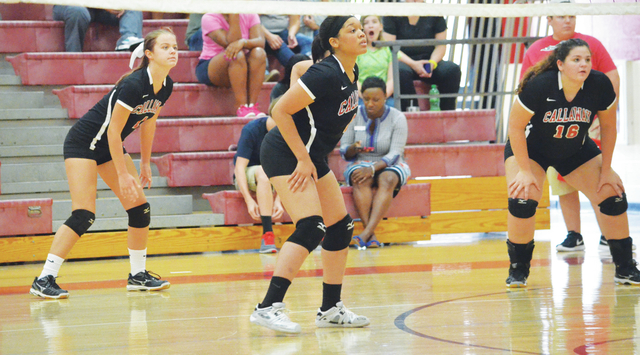 HOGANSVILLE – The Callaway High volleyball team jumped into a new season with a pair of hard-fought home matches on Thursday.

“We’ve played them the last few years,” Callaway coach Heather Smith said of Villa Rica and Pike County. “You get the cobwebs off, and get their minds going.”

In the Villa Rica match, after dropping the first set, Callaway was getting blown out in the second set when it rallied.

Callaway was down big in the second set, but it made it all the way back to take the lead before Villa Rica finished things off by winning three straight points.

“They played their hearts out,” Smith said of her players.

Alicia Marks had an ace to give Callaway a 22-21 lead in the second set, and it remained tight the rest of the way.

“We were very pleased with our first game,” Smith said. “The scoreboard is not what I care about right now. It’s about building communication, and team work, so we did a great job that first game.”

Smith said Marks excelled in the service game in both matches.

Looking ahead to the season, Smith will be counting on team captains Jasemine Drake and Bailey Bowles to lead the way, and Breanne Moncus and Alexis Garner also provide a veteran presence.

“We’ve had a lot of girls coming back, and they’re willing to step up and help,” Smith said.

Drake, a senior, said all of the players are on the same page.

“We feel like this year we’ll be better as a team,” she said. “We’ll work more together, be able to communicate well with each other, and just get things done.”

Callaway will have two more matches today in Columbus.

Callaway will play Brooks County as well as the host Spencer team, and that will be an area match.

Callaway reconnects with its roots