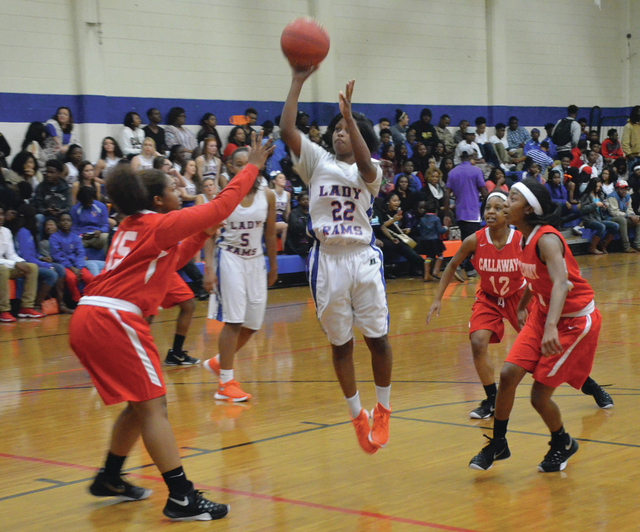 The Callaway Cavaliers tuned up for next week’s season opener against the LaGrange Grangers by taking on Northside in a preseason game on Friday night in Hogansville.

It was an impressive effort for the Cavaliers, who moved the ball at will while playing lock-down defense on the way to a 33-14 victory.

Junior DJ Atkins, who figures to take over the primary responsibilities at running back in place of all-state performer Cedric Maynard, had a big night with two long touchdown runs.

Senior Braylon Sanders also showed off his play-making ability with a touchdown run as well as a scoring catch, and junior quarterback Kedrick Ramsey had a touchdown run in the second half.

Callaway’s defense was up to the challenge as well.

In the first half when the starters were in the game, Callaway’s defense was dominant, although Northside’s David Apiag did get loose for a long scoring run late in the first quarter.

Other than that play, though, Northside’s offense didn’t get a whole lot done in the first half.

On their second possession, the Cavaliers found the end zone for the first time, and they only needed two plays to get there.

Atkins took a handoff from quarterback Dylan Johnson, and he beat the Northside defense down the right sideline for a 50-yard touchdown run.

Noah Stephens made the extra point, and Callaway led 7-0.

After the defense forced a three-and-out, Callaway got the ball back at its own 37-yard line.

Some penalties pushed the Cavaliers all the way inside their own 20-yard line, but they weren’t phased.

Johnson completed an 11-yard pass to Sanders and followed that up with a 19-yard keeper, and a 6-yard run by Atkins gave the Cavaliers a first down inside Northside territory.

Sanders moved to quarterback, and he made an instant impact with a 36-yard touchdown run, and Stephens converted the extra point to give Callaway a 14-0 lead with 1:18 left in the first quarter.

After running just nine offensive plays the first three times it had the ball, Northside finally got on track on its fourth possession.

Apiag, a 5-foot-6 senior, showed off his elusiveness and speed and scored on a 70-yard run, and Callaway’s lead was down to 14-7 with 17 seconds to play in the first quarter.

It took Callaway one play to extend that lead.

Atkins took a handoff, and this time he went 70 yards for the touchdown, and after Stephens made his third extra point, Callaway was ahead 21-7 with one tick left in the opening quarter.

In the second quarter, Callaway got it done through the air.

After Callaway moved into Northside territory, Johnson whipped a nice pass over the middle to Sanders, who caught the ball in stride and scored on a 37-yard play.

That was the final score of the first half, and Callaway took a 27-7 lead to the locker room.

In the third quarter, Ramsey was at quarterback, and he led the Cavaliers on a 75-yard touchdown drive.

One of the big plays on the drive was a 15-yard completion to Everett Duffy, and running back Qua Hines and fullback Cartavious Bigsby both had some productive runs.

When the Cavaliers got close, Ramsey scored on a 4-yard run, and Callaway led 33-7 with seven minutes left in the third quarter.

Northside added a touchdown in the fourth quarter to cap the scoring.

Also on Friday, Troup played a preseason game at Harris County, and it lost 23-0.

Troup will open its season on Friday at Hardaway.

OF NOTE: For more photos from Friday’s game in Hogansville, check out facebook.com/LDNsports

Callaway’s Braylon Sanders takes off on a touchdown run in the first half. Kevin Eckleberry | Daily News

http://lagrangenews.com/wp-content/uploads/sites/37/2016/08/web1_CHS7.jpgCallaway’s Braylon Sanders takes off on a touchdown run in the first half. Kevin Eckleberry | Daily News