Columnist: How Trump is badly losing the white college-educated vote 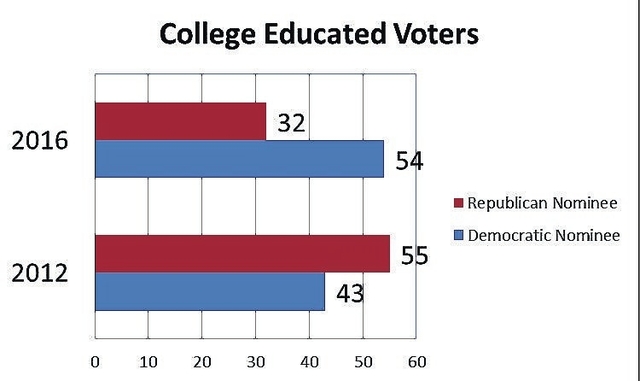 Since Gen. Dwight D. Eisenhower’s re-election, Republicans have been winning the college-educated white vote, a trend that enabled the GOP to not only break the New Deal coalition, but to propel the party toward dominance in presidential elections. But if the election were held today, Donald Trump would lose the white college-educated vote — and all college graduates — to Hillary Clinton, a group Romney handily won four years ago.

In confirming how Democrats are winning the key GOP demographic, David Lauter with the Los Angeles Times writes of Trump, “His style, and the issues he has focused on, appeal to blue-collar, white voters — a shrinking part of the electorate — but threaten to turn off college-educated voters, whose ranks are increasing.”

In addition to citing the NBC/Wall Street Journal poll revealing Clinton’s 7-point lead among white college-educated voters nationwide, Lauter adds evidence from a Franklin & Marshall College poll from the swing state of Pennsylvania, where college educated voters favor Clinton by a 30-point margin. At the same time, whites whose education ended at high school back Trump by a double-digit margin.

Salon’s Simon Maloy found that Trump trailed all other candidates in the race among voters under the age of 30. That meant he was behind Clinton, Libertarian Gary Johnson and Jill Stein of the Green Party.

In fact, Trump’s support could only be registered in single digits. Maloy noted that with an ethnically diverse younger crowd and polarizing positions on issues, Republicans were damaging their party for future elections, not just 2016.

Even among College Republican groups, ABC News’ Meridith McGraw found that the GOP standard-bearer is turning off many of these groups who normally support the party. Some have refused to endorse Trump. She cites GOP pollster Kristen Soltis Anderson as saying such damage from Trump’s campaign has the potential to hurt Republicans for decades.

No doubt, Republicans will claim that this is the work of college professors, who have been anti-GOP. Such arguments that liberal academics are responsible aren’t supported by the evidence.

The campus activism of the 1960s and 1970s did not lead white college graduates to vote Democratic. Napp Nazworthy from Christian Post reported that all voters with a college degree supported Romney by double-digits, citing Gallup and NBC/Wall Street Journal polls.

As Trump appears to sink GOP presidential hopes in 2016, there is a real concern among Republicans that such losses will pull down party advantages in the House of Representatives and U.S. Senate, as well as costing the party in future contests.