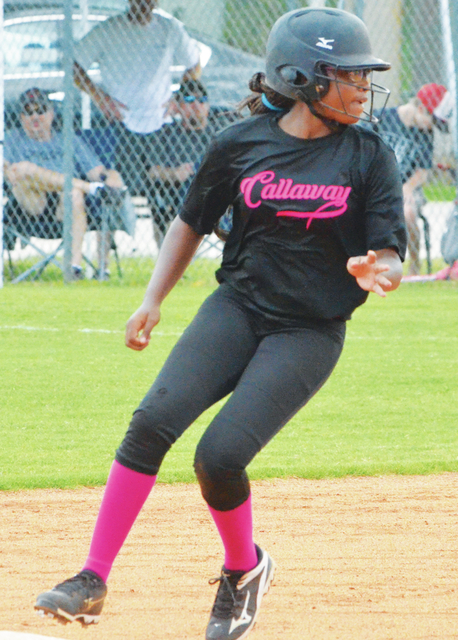 HOGANSVILLE – After a winning start to the season, the Callaway Lady Cavaliers met their match on Saturday.

Callaway, which began the season with wins over Troup and Sandy Creek, dropped both of its games on Saturday in the “Hope for a Day” softball event.

Callaway, which was the host team for Saturday’s games, was blanked by LaGrange 10-0 before falling to Troup 11-7.

“We obviously didn’t perform well today,” Callaway coach Ashley Summerlin said. “But that’s what these games are for. We try to play as many games as we can before region. It gives people a lot of opportunities, so when it’s time for region, we know what we’ve got.”

Callaway plays a total of 13 games before its region opener against Aug. 30 against Lamar County.

“We’ll learn from it,” Summerlin said. “You always have days like this, especially in this game. This is a very humbling game. Whenever you get on top of the mountain, you can be down in the valley just as soon. The big thing is, how are you going to respond?”

In the first of three games on Saturday, LaGrange and Callaway shared the field.

LaGrange, which was looking for its first win after two losses to start the season, eased to a 10-0 win.

The game ended after the sixth inning because of the run rule.

After watching Troup and LaGrange play, Callaway returned to the field for the day’s final game against Troup.

Callaway was much more competitive in that game, but it still fell short 11-7.

“I thought Troup hit the ball very well,” Summerlin said. “We didn’t help ourselves (with some errors).”

Trailing 11-4 against Troup, Callaway rallied for three runs in the bottom of the sixth to get within four, but it came no closer.

The Lady Cavaliers were trailing 3-1 when Skylar Rice came through with a two-run double in the bottom of the third, and the game was deadlocked heading to the fourth inning.

Troup broke it open with five runs in the fourth inning highlighted by a Madison McCartney three-run home run, and Callaway was in an 8-3 hole.

Twice after that Callaway got as close as four runs, but Troup was able to hang on for the win.

Oeisha Jenkins was 3-for-3 for Callaway with an RBI and three runs scored, and Lydia Barlett had two hits while scoring two runs.

Carley Turner had a two-run double in the fourth inning, and Kelly Carlisle, Leijorey Sanders and Jasmine Dukes each had a hit with a run scored.

Kourtney Greer and Acia Stephens each had hits for Callaway, and Rice was on base three times.

In the LaGrange game, Greer, Jenkins and Rice had Callaway’s only hits.

Summerlin said it was a successful day, with hundreds of dollars raised to help the Hope for a Day organization.

“We were glad to be able to help. We were excited to do that,” Summerlin said. “It was a good thing. The community came out and supported the girls, and supported Hope for a Day.”

Callaway outfielder Leijorey Sanders makes a throw back to the infield during Saturday’s game against Troup. Kevin Eckleberry | Daily News

http://lagrangenews.com/wp-content/uploads/sites/37/2016/08/web1_softball30-2.jpgCallaway outfielder Leijorey Sanders makes a throw back to the infield during Saturday’s game against Troup. Kevin Eckleberry | Daily News

Callaway’s Acia Stephens puts a ball in play during a game against Troup on Saturday. Kevin Eckleberry | Daily News

http://lagrangenews.com/wp-content/uploads/sites/37/2016/08/web1_softball33-9.jpgCallaway’s Acia Stephens puts a ball in play during a game against Troup on Saturday. Kevin Eckleberry | Daily News

HOGANSVILLE – The Callaway High volleyball team jumped into a new season with a pair of hard-fought home matches on... read more