It’s about all-around excellence for Cavaliers 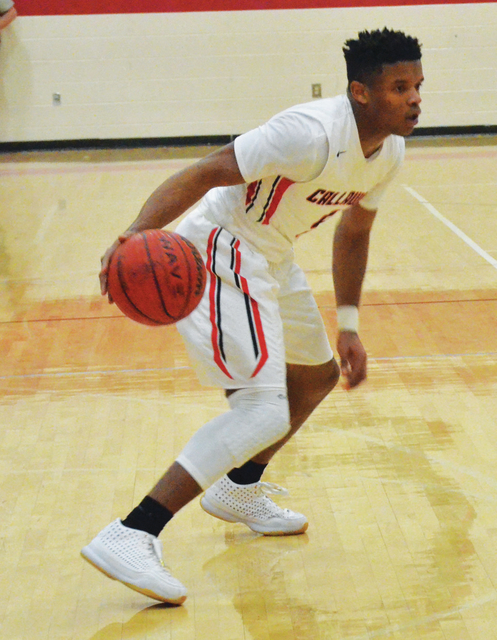 HOGANSVILLE – A high-powered, quick-strike offense has been a staple of the Callaway High football team over the past decade.

With offensive coordinator Matt Napier calling the shots and players like Quan Bray, Tez Parks and Terry Godwin handling the football, the Cavaliers haven’t had much trouble putting points on the scoreboard over the years.

While that high-octane offense is a key reason the Cavaliers have developed into a consistent winner, what they do when the other team has the ball has a great deal to do with the program’s success as well.

A great example of that took place in last year’s regular-season finale against Central-Carroll when a region championship was on the line.

On a sloppy field, it was a defensive-oriented game, and Callaway ended up winning 21-14.

The offense scored a late touchdown, but it was the Callaway defense that made the difference.

“A lot of times a defense gets overlooked a little bit, but when an offense is struggling, that’s our job is to keep us in the game until they can figure it out,” said Dusty Hubbard, Callaway’s defensive coordinator since 2005 when Pete Wiggins took over the program. “And it may not always be pretty. It may be bend but don’t break. If you play defense, you’ll always be in the game. There’ll never be a situation where you get blown out. We feel like that’s kind of the recipe for success out here.”

Under Hubbard, Callaway always puts a well-coached, disciplined, capable, and oftentimes dominant unit on the field.

The names changed, but the effort of the men playing defense doesn’t.

“The biggest thing about defense is just being consistent with your effort,” Hubbard said. “You can’t have a day where you go out there and don’t play as hard as you can. You have to make sure you’re giving max effort everytime you’re out there, and that’s practice as well. That’s the only way to figure it out.”

What this year’s defense will look like remains to be seen obviously, but in one preseason game at least, the Cavaliers appeared awfully formidable.

Northside did score once on a 70-yard touchdown run, but that was about it.

On six first-half possessions, the Patriots went three-and-out four times, and they also lost a fumble.

“The things that you wanted to see, we saw,” Hubbard said. “I felt like all of our guys played with really good effort. We had some young guys that showed that they’re ready as far as being able to get out there and play, and play good football. There were a couple of times we got caught, and that’s going to happen, too. We had four three-and-outs with their starters with one turnover when we recovered a fumble. That’s pretty good.”

Callaway’s defense is a mixture of veterans and players who are new to the starting lineup.

Three of the men who have been there before are senior linebackers Michael Freeman, Jibrell Jackson and Travis Traylor, and they helped shut down Northside last week.

“He flew around really good,” Hubbard said. “He played a little bit on special teams last year. Didn’t play a lot of scrimmage downs, but we feel he’s going to play a lot for us this year and be a benefit for us.”

One area where Callaway is breaking in some new players is on the defensive line, although Keegan Woods does return as a starter.

Junior Lichon Terrell was a part-time player a year ago, and now he’ll be counted on to hold down a defensive-end position along with Woods.

“He’s a kid that we feel like has a lot of upside,” Hubbard said of Terrell. “He’s only going to get better, and we’re excited about him.”

Thomas Hodge, who was a linebacker last year, is moving to the defensive line this season, and Jamie Sellers also helped Callaway control things up front against Northside.

Callaway has some experience in the secondary, with Dominic Copeland and Courtney Williams having started at times a year ago.

Kobe Jackson began the season as a starter, but he broke his ankle early on and missed of the year.

“He was a starter in games one and two, but he broke his ankle and didn’t end up coming back until the playoffs,” Hubbard said of Jackson.

In the second half, the backup players got an opportunity to get on the field, and a lot of players who likely won’t see the field much in the regular season got some game action.

“It gets a lot of anxiety off of those young guys,” Hubbard said. “I think more than anything, it gives them an incentive to work harder in practice, knowing they’ve got a chance to play, and it lifts their morale up a little bit.”

OF NOTE: For an in depth look at the Callaway High football team, see the preseason football edition in Friday’s LaGrange Daily News.