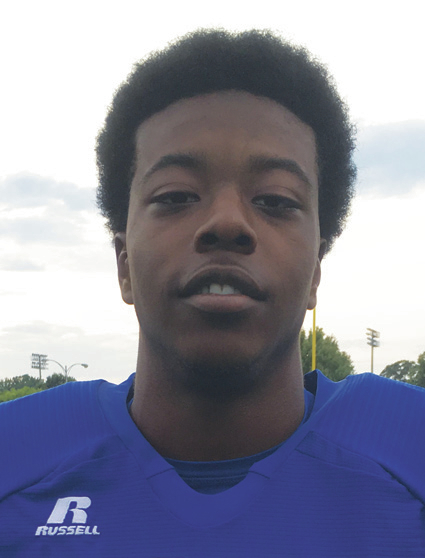 LAGRANGE – LaGrange High’s Rico Dunn wants to make the most of the Friday nights he has remaining as a high-school football player.

With that in mind, Dunn committed himself to being as physically prepared as he could possibly be for his senior season.

Considering the performance he put together in last month’s ironman competition, it looks like that mission was a successful one.

In a competition that measures the athletes in a number of different areas, from speed, to strength, to endurance, it was Dunn surging to the top spot.

“I knew I had some competition,” said the versatile Dunn, a linebacker and defensive lineman. “I knew if I put my mind to it, as long as I went out there did what I was supposed to do, I could do it. I had my plan, and I did it.”

Dunn said his ironman performance was a testament to the offseason workout program.

“I don’t think I would have got my 40 time, and my vertical, without putting my work in,” he said.

Now, Dunn will look to carry that momentum over into the season as LaGrange takes on the Callaway Cavaliers on Friday night at Callaway Stadium.

Dunn’s responsibility will be to make tackles, but also to help make sure everyone on the defensive side of the ball keeps a positive mindset throughout the game.

“My role is going to be keeping everybody hyped, and making sure everything goes smooth without any mistakes,” Dunn said. “The team with the less mistakes wins. Just keep the defense calm.”

Dunn is a member of a defense that has a number of new starters, but also has some talented veterans in place.

While Dunn is a senior with a lot of playing experience, this will be his first season as a Granger.

Dunn was a member of the Harris County football team for three years before transferring to LaGrange.

“There’s no question when he gets here he knows what he’s supposed to do,” Burks added. “He’s a great guy on the team. We’re looking for a lot out of him.”

At Harris County, Dunn played as a freshman, and his sophomore season was slowed because of a shoulder injury.

“We think our defense can take us a long way,” Dunn said. “My confidence is real high on my defense.”

Another veteran player at the linebacker position is Young, who Burks said is ready for the spotlight.

“He’s the leader,” Burks said. “He’s been wanting that role for a while. He watched a lot last year, and he learned a lot. Now, the stage is his, and he wants it.”

Burks said Daz Williams, Myles Johnson and Chase Sams have shown a lot of potential at linebacker as well.

“We have some multiple guys that we can develop,” Burks said. “We have a lot of guys.”

On the defensive front, Burks will be counting heavily on Pollard and Olajubutu to dominate.

They were both effective players a year ago, and how well the defense performs this year will have a lot to do with how successful they are on game night.

Pollard, who is one of LaGrange’s most heavily recruited players, will be a defensive end, albeit on a different side of the line of scrimmage from a year ago.

“Last year I was a left end,” Pollard said. “This year I’m a right end. It doesn’t really matter.”

Like Dunn, Pollard approached the offseason with a disciplined approach when it came to training, and he spent a lot of time working with trainer Kane Bradfield.

As solid as Pollard was as a junior, he said “I believe I can be better.”

LaGrange’s defense struggled at times a year ago, and Pollard said all of the players on that side of the ball are confident it’ll be a different story this season.

“We just have to go back to the old ways,” Pollard said. “We’re trying to win state this year. Everybody’s excited.”

Seniors Marques Payne and Jordan Ragan will provide a solid presence on the defensive line as well.

Another one of the veterans on defense is Fannin, who brings experience to his safety position.

Outside of Fannin, there aren’t many players in the secondary with much varsity experience.

OF NOTE: For an in depth look at the LaGrange High football team, see the preseason football edition in Friday’s LaGrange Daily News.

LaGrange’s defense gets ready for a play during a preseason game against Heard County. LaGrange’s defense will be tasked with trying to slow down Callaway’s offense in Friday’s season opener. Kevin Eckleberry | Daily News

http://lagrangenews.com/wp-content/uploads/sites/37/2016/08/web1_LHS2-2.jpgLaGrange’s defense gets ready for a play during a preseason game against Heard County. LaGrange’s defense will be tasked with trying to slow down Callaway’s offense in Friday’s season opener. Kevin Eckleberry | Daily News

Rico Dunn will look to make an impact in his one and only season as a LaGrange Granger. Kevin Eckleberry | Daily News

http://lagrangenews.com/wp-content/uploads/sites/37/2016/08/web1_Dunn.jpgRico Dunn will look to make an impact in his one and only season as a LaGrange Granger. Kevin Eckleberry | Daily News

LaGrange has big day at the plate

HOGANSVILLE – They had the bats working. The LaGrange Lady Grangers came into Saturday’s games against Callaway and Troup having... read more