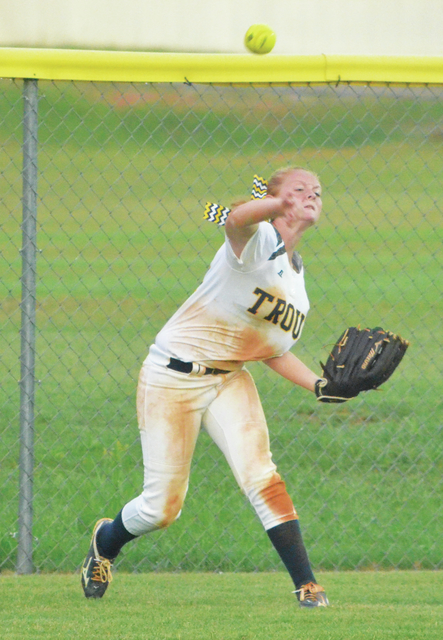 LAGRANGE – That’s three in a row for the Troup High softball team.

After opening the season with back-to-back losses, the Lady Tigers have strung together three consecutive wins, and they’re 1-1 in Region 5-AAAA after beating Sandy Creek 11-2 on Tuesday.

Clinging to a 3-1 lead, Troup batted around in the fourth inning and scored eight runs, and the game ended in the fifth inning because of the run rule.

Freshman Lauren Brooks pitched a five-inning complete game, and she also had a pair of doubles.

After a scoreless first inning, Troup took the lead with three runs in the bottom of the second.

Brooks helped herself with a leadoff double, and Andrea Nix had a triple to bring in courtesy runner Chloe Nix with the game’s first run.

Nix later scored on an error to make it a 2-0 game, and Kayla Lane, who was hit by a pitch, scored on a wild pitch to give Troup a 3-0 cushion.

Sandy Creek scored a single run in the top of the third inning to make it a 3-1 game, and that’s the way it remained until Troup delivered the knock-out punch in the bottom of the fourth.

Thirteen Troup batters came to the plate in the inning, and there were six hits and four walks.

Lane led off with a hustle triple.

She blooped the ball into the outfield, and rather than settle for a base hit, she kept running hard and made it all the way to third.

Abby Taylor’s bunt single put runners on first and third, and Maddie Weathers drove in the inning’s first run with a groundout.

Taylor eventually scored on an error to push the lead to 5-1, and after walks by Madison McCartney and Kinley Stanford and a double by Skyle Loftin, Brooks hammered the ball into the outfield for another double to drive in two runs.

Later in the inning, Lane’s sacrifice fly brought in another run, and Weathers delivered an RBI single to cap the scoring.

Chandler Pritchett (walk) and Andrea Nix (bunt single) also reached base in the fourth inning, and everyone who came up helped contribute to the eight-run outburst in some fashion.

Needing three runs in the top of the fifth inning to keep the game alive, Sandy Creek was only able to produce one run, so that was that.

Troup will play two games on Friday and three games on Saturday in the Callaway Classic at Shuford Fields.

LAGRANGE: LaGrange had its hands full with a tough Cedartown team in a region road game on Tuesday.

LaGrange managed just one hit, and Cedartown claimed an 8-0 win in a game shortened to five innings because of the run rule.

LaGrange will host Heard County on Thursday before playing five combined games on Friday and Saturday in the Callaway Classic at Shuford Fields.

Troup freshman Lauren Brooks pitched five innings to get the win, and she also had a two-run double in the fourth inning. Kevin Eckleberry | Daily News

http://lagrangenews.com/wp-content/uploads/sites/37/2016/08/web1_troup2-16.jpgTroup freshman Lauren Brooks pitched five innings to get the win, and she also had a two-run double in the fourth inning. Kevin Eckleberry | Daily News