Grangers looking to get back on top 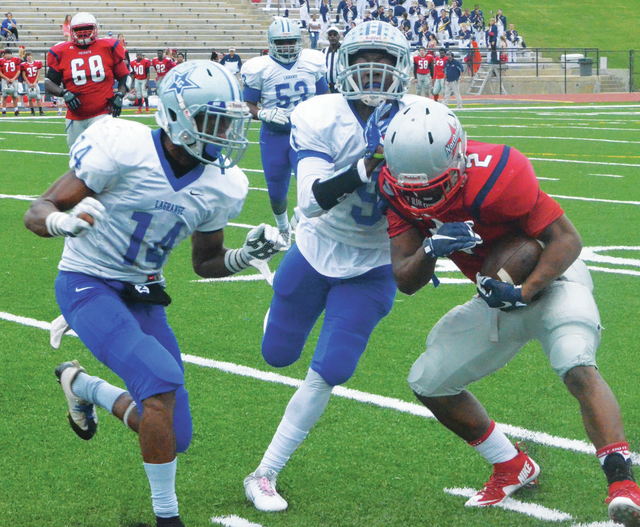 LAGRANGE – For LaGrange High head coach Dialleo Burks, it isn’t just about developing the best football players, although that’s obviously a big part of the job.

For Burks and LaGrange’s other coaches, it’s about helping the players become the best they can be in all aspects of life, whether it’s on the field, in the class room, at their part-time jobs, in the community, or at home.

“You talk about being excellent in what you do, and we want to be the best everywhere, on the field, off the field, in the class room,” Burks said. “If you don’t have that mindset, it opens up the door where something could creep in, and now it steals what you’ve been working so hard for. We want to make sure we’ve got all avenues covered.”

With that in mind, Burks won’t hesitate to pull a player off the field if he isn’t doing things the right way.

Being a part of a team, or any organization for that matter, requires an invidual to follow a particular set of rules or guidelines, and being a Granger is no excception.

“There are rules to all that you do, and you have to hold these kids to standards,” Burks said. “Some of them are floating through, doing their own thing. We want to make sure we commit in a way that they understand.”

Burks also makes sure that everyone understands that the best players will be the ones that end up on the field on game night.

Since the 2015 season ended with a loss to Columbus in a mini-playoff, Burks and the other coaches have been working hard to identify the players who give the Grangers the best chance of winning, and of making sure they’re in the position that best suits their skill set.

“We’re going to put the best guys out there,” Burks said. “We sat around the table and agreed upon, this is what we’re going to go with.”

Burks said it’s also important to make sure the team is equipped to overcome the inevitable injuries that are an unfortunate part of a physical sport like football.

“We evaluated last season, and we had a lot of injuries,” Burks said. “In some situations, we were stuck trying to figure out what the plan was, instead of knowing what the plan is. That’s on us as a staff.”

LaGrange played two preseason games, and Burks feels they helped some of the players adjust to unfamiliar positions they could be asked to play at some point.

“Player wise, we’re talking about development, understanding where our strengths and weaknesses are as a team,” Burks said. “So these two scrimmages, we really took the time to play some players in positions where if we had this position, what could we do.”

The hope is that all of the preparation put in by the players, and the coaches, will yield positive results this season.

By LaGrange football standards, it has been a difficult few seasons.

LaGrange hasn’t had a winning season since 2009, and it has won one playoff game over the past seven years, and that came in 2012 when it reached the second round at state.

A year ago, LaGrange went 5-5 and missed the playoffs.

Burks knows as well as anyone what LaGrange High’s football history is all about.

He was a standout player on the 1991 team that went 15-0 and won a state and national championship.

There are a handful of other coaches on the staff as well who played at LaGrange, and that includes a handful of coaches who like Burks were on state-championship teams.

“We’ve got four, five guys that played here,” Burks said. “We understand. We walked these halls. We wore the uniform, so we understand.”

Burks said the teams LaGrange play are fully aware of that history.

“When we line up on the field, those guys are being coached to beat us from 1983, 1991, to 2004,” Burks said. “That’s what that star (on the helmet) represents. You’re going to get everybody’s best. They have to recognize that. They have to take that on and go out and protect the program.”

Here’s a look at this year’s LaGrange football team:

LaPerion Perry was an all-state quarterback as a junior, and he was a dynamic, explosive player who gave the Grangers the threat of scoring a touchdown on any play.

Perry won’t be in the lineup when the season gets under way, though, as he recovers from offseason hip surgery.

Burks has known for months that Perry would be unable to go, so there has been plenty of time to find his replacement.

Senior Amad Ogletree started both of the preseason games, and sophomores Jakoby Smith and Nathan Cronic and freshman Charles Crawford have all seen significant playing time as well.

Ogletree has by far the most experience of any of those players.

As a sophomore in 2014, Ogletree was the starting quarterback on a team that reached the state playoffs.

A year ago, Ogletree was a wide receiver and running back as Perry ran the offense.

“He can play quarterback, running back, receiver,” Burks said of Ogletree. “He’s one that can float at a lot of different positions. And we’re comfortable with his skill set and what he can do offensively scheme wise.”

Ogletree, who is one of the team captains, said he has tried to “lead by example” during practice.

“When you’re looking at backups and things of that nature, it’s tough to figure out which one goes where,” Burks said. “That’s a good problem to have.”

At the running-back position, there will be some new players that will be carrying the ball.

Daz Williams, Cornell Kendrick and Myles Johnson have all run well during the preseason games, and James Clark will also be a part of the running-back rotation when he returns from injury.

In a preseason game against Heard County, Kendrick and Johnson both had touchdown runs, and Williams had some nice runs to help LaGrange get close to the end zone.

“We have some guys that we’re really looking at carrying the load back there,” Burks said.

LaGrange was hit hard by graduation at the wide-receiver position, with Mike Hardy, Andrew Askew and Derieko Smith having moved on.

“That’s our youngest position on offense,” Burks said. “We’ve really challenged those guys to step up.”

Jalen Wilson, a senior, is the wide receiver with the most experience, although his playing time was limited last year.

“He’s the only returning guy that we have that has played any snaps, and he didn’t get that many last year,” Burks said of Wilson.

Jamari Thrash and Bo Russell will also play wide receiver for the Grangers.

Russell caught a long touchdown pass from Ogletree in a preseason game against Newnan.

“He’s been looking really good,” Burks said of Russell. “He is settled in. He played a little receiver last year but he was mostly a defensive guy. We want him to focus on (wide receiver).”

A strength of LaGrange’s offense should be the offensive line.

Olajubutu and Pollard are both starting defensive linemen who will be used on offense occasionally.

“It starts up front, so I’m glad that we are solid in that phase,” Burks said.

The two senior defensive linemen are returning starters, and they were both standout players as juniors last year.

Pollard has developed into one of the team’s most highly recruited players and will be counted on to be a leader of the defense this season.

As for Olajubutu, Burks said “he’s very quick off the ball, a powerful guy.”

On the opposite end of the experience spectrum are freshmen Andy Boykin and Jonathan Sutton, and Burks said they will both play this season.

Seniors Marques Payne and Jordan Ragan will provide a solid presence on the defensive line as well.

At linebacker, Jadarius Young will be leading the way for LaGrange.

“He’s wanted that role for a while,” Burks said of Young. “He watched a lot last year. He learned a lot. And now, the stage is his, and he wants it.”

Burks said Daz Williams, Myles Johnson and Chase Sams have shown a lot of potential at linebacker as well.

“We have some multiple guys that we can develop,” Burks said. “We have a lot of guys.”

Senior Rico Dunn, who transferred from Harris County, will play linebacker as well, and he can also play on the defensive line.

“Rico will be a cross where he can play everywhere,” Burks said. “He can play on the line, and he can play linebacker.”

Burks said the secondary is “the youngest position on the field.”

The only member of the secondary who saw varsity playing time last season was Bo Russell.

Burks said Deanthony Rachel, Cordarius Grissom, Javarious Thomas and Jamari Thrash “will be fighting for a position” i the defensive backfield.

At safety, Burks said Marcus Fannin will be “an emotional leader,” and Lequincy Shephard and Chase Sams will play that position as well.

Matt Rainey will handle the place-kicking and punting duties for LaGrange.

LaGrange head coach Dialleo Burks talks to his players during halftime of a preseason game against Heard County. Burks is in his third season as the Grangers’ head coach. Kevin Eckleberry | Daily News

http://lagrangenews.com/wp-content/uploads/sites/37/2016/08/web1_LHS6.jpgLaGrange head coach Dialleo Burks talks to his players during halftime of a preseason game against Heard County. Burks is in his third season as the Grangers’ head coach. Kevin Eckleberry | Daily News

Deanthony Rachel (21) and the rest of the LaGrange defense gets in position before the snap against Heard County. LaGrange’s defense will look to lock down its opponents this season. Kevin Eckleberry | Daily News

http://lagrangenews.com/wp-content/uploads/sites/37/2016/08/web1_LHS8.jpgDeanthony Rachel (21) and the rest of the LaGrange defense gets in position before the snap against Heard County. LaGrange’s defense will look to lock down its opponents this season. Kevin Eckleberry | Daily News