Offensive line will pave the way for Grangers 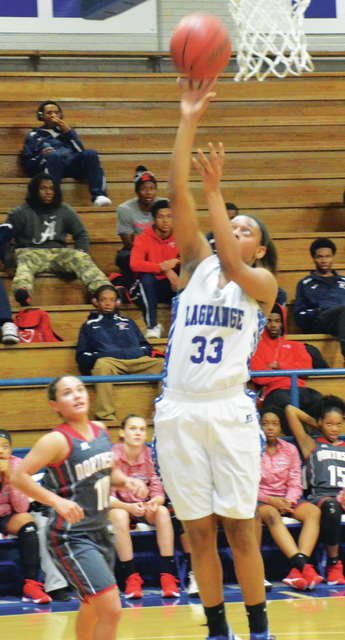 LAGRANGE – The LaGrange Grangers have one of the state’s best offensive play-makers on their roster.

Unfortunately, when LaGrange opens the season on Friday against Callaway, quarterback LaPerion Perry will be unable to go.

Perry, who recently verbally committed to Purdue, is out of action at the moment as he recovers from offseason hip surgery.

The show goes on, though, and LaGrange head coach Dialleo Burks is confident the team will be able to do some big things offensively.

A lot of that confidence stems from the fact that LaGrange has a veteran, talented offensive line that should make life comfortable for whoever is playing quarterback.

“Offensively, when you look at our team up front, it’s the strength,” Burks said. “We have those guys filling those roles. And that’s where it starts. It starts up front, so I’m glad that we are solid in that phase.”

While the offensive line is settled, the question of who will be taking the snaps at quarterback has been an ongoing one throughout the summer.

Senior Amad Ogletree has started both of LaGrange’s preseason games, and he threw a long touchdown pass to Bo Russell last week against Newnan.

Ogletree was LaGrange’s starting quarterback as a sophomore, and he helped lead the team to the state playoffs.

A year ago, when Perry exploded onto the scene as an all-state quarterback, Ogletree excelled as a wide receiver and running back.

Outside of Perry, Ogletree obviously has the most playing time at quarterback, so that is where is playing right now.

“I want to do what’s going to give the team the best chance to win,” Ogletree said this summer. “But, I would rather play running back and wide receiver. But if I have to play quarterback to help the team, I’m going to give it my all to try to be the best I can be. At the end of the day, it’s about the team.”

Sophomores Nathan Cronic and Jakoby Smith and freshman Charles Crawford have all received a lot of playing time in the two preseason games, and they all worked hard during the summer.

“They’re solid guys,” Burks said. “When you’re looking at backups and things of that nature, it’s tough to figure out which one goes where. That’s a good problem to have.”

As for Ogletree, Burks said he can excel in whatever role he’s asked to take on.

“He can play quarterback, running back, receiver,” Burks said. “He’s one that can float at a lot of different positions. And we’re comfortable with his skill set and what he can do offensively scheme wise.”

LaGrange will have some newcomers carrying the football.

Juniors Daz Williams, Myles Johnson and Cornell Kendrick have performed well, and James Clark will be a part of the running-back rotation as well when he recovers from an injury.

“We have some guys that we’re really looking at carrying the load back there,” Burks said.

LaGrange also has some inexperience at the wide-receiver position.

Mike Hardy and Andrew Askew were LaGrange’s primary receivers a year ago, but they have moved on, and it’ll be up to a new group of players to fill that void.

Russell showed what he could do when he caught a touchdown pass against Newnan, and Jalen Wilson and Jamari Trash will also be catching passes this year.

“That’s our youngest position on offense,” Burks said. “We’ve really challenged those guys to step up.”

As the offensive line that Burks is so high on, among the returing players are seniors Coy Tedescucci, Jordan Ragan and Marques Payne.

“Offensively, we’re going to have to control the line of scrimmage,” Burks said. “That gives the quarterback confidence.”

LaGrange quarterback Amad Ogletree hands the ball off to Cornell Kendrick while Myles Johnson goes in motion during a preseason game against Heard County. Those three players will critical to LaGrange’s offensive success this season. Kevin Eckleberry | Daily News

http://lagrangenews.com/wp-content/uploads/sites/37/2016/08/web1_LHS4-1.jpgLaGrange quarterback Amad Ogletree hands the ball off to Cornell Kendrick while Myles Johnson goes in motion during a preseason game against Heard County. Those three players will critical to LaGrange’s offensive success this season. Kevin Eckleberry | Daily News

LaGrange’s offensive linemen get in position during the Heard County game. The offensive line should be a strong suit for LaGrange. Kevin Eckleberry | Daily News

http://lagrangenews.com/wp-content/uploads/sites/37/2016/08/web1_LHS3-1.jpgLaGrange’s offensive linemen get in position during the Heard County game. The offensive line should be a strong suit for LaGrange. Kevin Eckleberry | Daily News