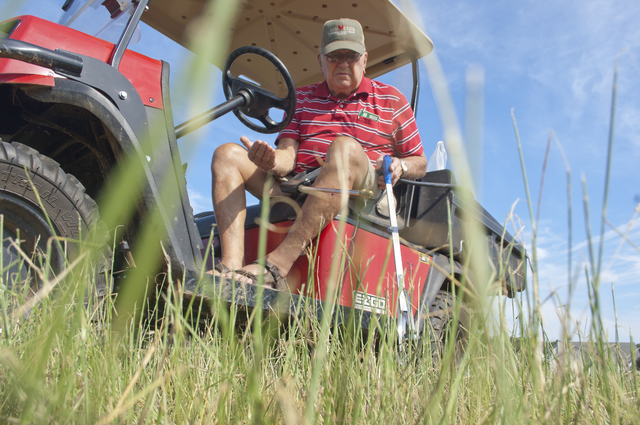 LaGRANGE — Cattleman Will Oubre loaded his blue heeler dog, Belle, into his golf cart Thursday morning and headed to his acres of pasture off Hamilton Road to survey the damage.

In less than a week, a horde of invasive insects known as armyworms has decimated his Bermuda grass fields, which he would have harvested in early September and used to feed his cattle.

“It’s unreal,” the 90 year old said as the golf cart jounced slowly through the barren field.

To the untrained eye, the worms are hard to see. They look more like shadows on the short, thin stalks of grass — but once you see them, they’re everywhere.

“Every stem of grass has got one on it,” Oubre said. “They weren’t stems when they got here, they made stems out of them.”

The worms won’t eat the weeds, or the crab grass — they prefer the good stuff, like the 25 acres of Bermuda grass Oubre spent $1,270 to fertilize on July 15.

“It would have been ready to cut in about two weeks,” Oubre lamented. “Sixty rolls of hay at about $50 each, that’s what it’s cost me.”

When the grass is harvested, it’s usually between a foot and a half to 2 feet tall, but the stubs left in the Georgia soil where Oubre’s cattle graze are a dismal 6 or 8 inches. What remains has been stripped bare by the pests.

“I’ve turned the cows loose on it and let them get what they can,” he said. “There’s hardly anything left for the armyworms to eat. It only took them four days to do this.”

Oubre isn’t alone. Across the area, Oubre said he knows of other farmers having the same problem.

Although it’s the worms doing the destruction, Oubre points the finger at Mother Nature.

“The water is running out,” he said as he drove his golf cart past a small creek where his cattle waded into the muddy water to cool off. “If we could get a good rain, maybe I could get a cutting of hay about the first week of October.”

With a good rainstorm, Oubre said, the waters could wash the pests away and unleash the fertilizer to encourage the grass to grow. That doesn’t look too likely, though, said Ryan Willis, a meteorologist with the National Weather Service in Peachtree City.

“For the weekend we have a decent chance of scattered thunderstorms, but not the drought-busting kind,” Willis told the Daily News. “Localized areas can get a couple of inches, but it won’t be widespread.”

Since about March, areas around LaGrange have been in drought conditions, which have reached extreme levels locally and show no signs of ending anytime soon.

On top of that, record-breaking temperatures have sweltered not just Troup County, but the planet as a whole. July was the hottest month in recorded history, setting the 15th month consecutive global heat record. Scientists started collecting data in 1880.

Perhaps the most frustrating fact of all is that there’s little Oubre can do to eradicate the armyworms. Insecticides are expensive, and Oubre said they’d likely “just blow off in the wind.”

But the problem could get worse for Oubre and the other farmers before it gets better. The oldest armyworms eat more than all the other ages put together. That makes detecting and infestation difficult until it’s almost too late.

Still, Oubre is hopeful a deluge of rain may come and wash away his misfortune. A good rainfall soon could allow for his grass to spring back in time for that early October harvest. If it does, the harvest would come just in time for his 91st birthday on Oct. 11.

Relative amounts of food eaten by the armyworm during each growth stage. Source: Auburn University.

http://lagrangenews.com/wp-content/uploads/sites/37/2016/08/ArmyWormGraphic-1.pdfRelative amounts of food eaten by the armyworm during each growth stage. Source: Auburn University.

Will Oubre holds an armyworm while surveying his fields on Thursday.

http://lagrangenews.com/wp-content/uploads/sites/37/2016/08/web1_ArmyWorms02WEB-1.jpgWill Oubre holds an armyworm while surveying his fields on Thursday.

http://lagrangenews.com/wp-content/uploads/sites/37/2016/08/web1_ArmyWorms03WEB-1.jpgAn armyworm crawls up a stalk of Bermuda grass Thursday in a field owned by Will Oubre

Will Oubre sprays livestock pest control on armyworms in his fields off Hamilton Road on Thursday.

http://lagrangenews.com/wp-content/uploads/sites/37/2016/08/web1_ArmyWorms04WEB-1.jpgWill Oubre sprays livestock pest control on armyworms in his fields off Hamilton Road on Thursday.

A cow eats what’s left of the Bermuda grass in Will Oubre’s farm off Hamilton Road on Thursday.

http://lagrangenews.com/wp-content/uploads/sites/37/2016/08/web1_ArmyWorms05WEB-1.jpgA cow eats what’s left of the Bermuda grass in Will Oubre’s farm off Hamilton Road on Thursday.

Will Oubre, a cattleman, searches for armyworms Thursday on his farm off Hamilton Road. In less than four days, the pests have decimated more than 100 acres of Oubre’s Bermuda grass, costing him thousands of dollars in feed for his cattle.

http://lagrangenews.com/wp-content/uploads/sites/37/2016/08/web1_ArmyWorms01WEB-1.jpgWill Oubre, a cattleman, searches for armyworms Thursday on his farm off Hamilton Road. In less than four days, the pests have decimated more than 100 acres of Oubre’s Bermuda grass, costing him thousands of dollars in feed for his cattle.