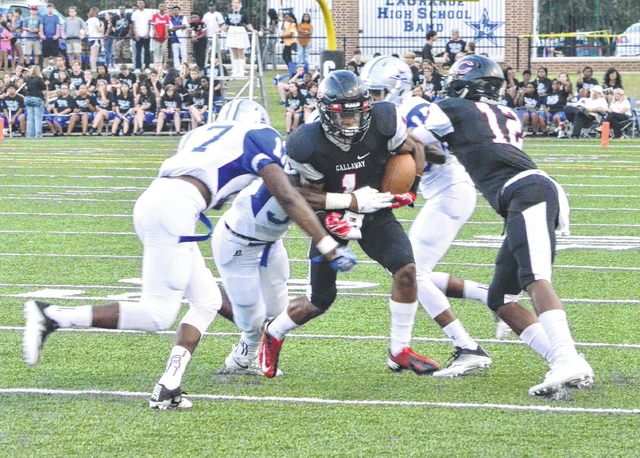 LAGRANGE – They didn’t need any late-game heroics this time.

Two years ago, the Callaway Cavaliers beat the LaGrange Grangers for the first time in school history, and they staged a dramatic fourth-quarter rally to do it.

Callaway trailed 14-0 in the fourth quarter, and it ended up winning 20-14 in overtime.

A year ago, it was LaGrange turning the tables with a 45-20 victory over Callaway.

On Friday, those two county rivals got together for the third straight year, and for the fifth time ever, and it was all Callaway.

The Cavaliers, displaying an explosive, quick-strike offense and a suffocating defense, opened their season with a 37-6 victory over the Grangers.

It was a satisfying way to begin what could be a special season for the Cavaliers, who are ranked high in Class AA in a handful of different polls.

“I’m really proud of our football team,” Callaway head coach Pete Wiggins said. “We made a whole lot of mistakes, but we overcame them. We’ve got a young team, and we knew coming in there’d be mistakes. But our offense kept driving, and we were able to put the ball in the end zone. And the defense just made stand after stand.”

For LaGrange, it was a tough start to the season, and head coach Dialleo Burks said the team did some things you can’t do against a quality opponent like Callaway.

“This was a lesson learned tonight, that you can not turn the ball over, and you can not have penalties,” Burks said.

LaGrange also had a pair of shanked punts that set up Callaway up with a short field for both of its first-half touchdowns.

In the first quarter, Callaway had the ball at the LaGrange 20-yard line following a 9-yard punt.

Four plays later, quarterback Dylan Johnson faked a handoff to DJ Atkins and scored on a 1-yard run, and after a failed two-point conversion, Callaway led 6-0 with 3:33 left in the opening quarter.

In the second quarter, another short punt gave Callaway the ball at the LaGrange 20-yard line once again.

The Cavaliers got knocked back because of some penalties, but they scored anyway.

Noah Stephens made the extra point, and Callaway led 13-0 with 3:02 left in the second quarter, and that was the score at the break.

In the third quarter, it took the Cavaliers less than a minute to expand their lead.

On the second play of the second half, Johnson dropped back and threw the ball downfield to a wide-open Braylon Sanders, who made the catch and raced to the end zone for a 75-yard touchdown.

Stephens connected on the extra point, and Callaway led 20-0 with 11:03 to play in the third quarter.

Later in the third quarter, Cartavious Bigsby blocked a punt, setting Callaway up at the LaGrange 14-yard line.

That led to a 29-yard field goal by Stephens, and Callaway led 23-0 with 3:10 remaining in the third quarter.

LaGrange’s next possession ended with a lost fumble that was recovered by Jamie Sellers.

The Cavaliers were unable to turn that turnover into points, but moments later they scored anyway thanks to a big defensive play.

MJ Robertson, a freshman defensive back, picked off a pass and returned it about 30 yards for a touchdown, and Stephens made the extra point to put the Cavaliers on top 30-0 with 10:44 to play.

The Grangers then went 80 yards for their lone touchdown drive, with sophomore quarterback Nathan Cronic leading the way.

Cronic completed a 47-yard pass to Jamari Thrash to get the Grangers in Cavaliers’ territory, and Cornell Kendrick capped the drive with a 1-yard touchdown run with 7:24 left in the game.

Later in the fourth quarter, Johnson threw a screen pass to DQ Wilkerson, and the junior receiver turned that into a 52-yard touchdown.

Stephens made the extra point with 2:09 left to cap the scoring.

OF NOTE: For more on Friday’s game, check out Monday’s sports section. And for more photos from the game, go to facebook.com/LDNsports