It’s a learning experience for Grangers 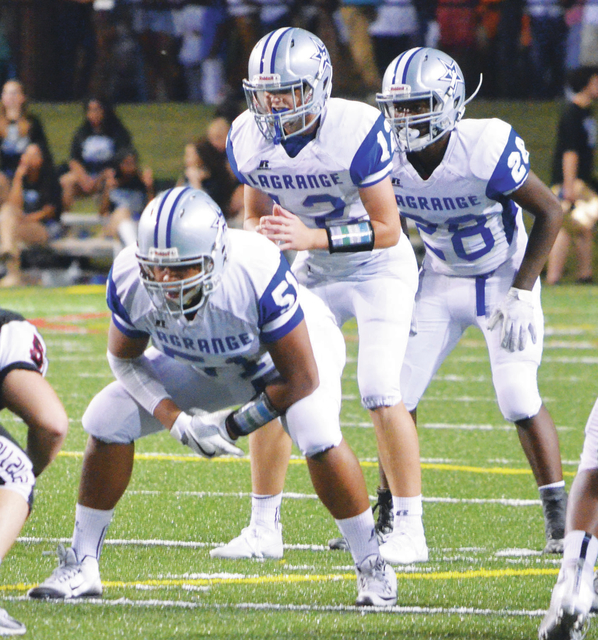 It was a disappointing opening night for the LaGrange Grangers, who were beaten by the Callaway Cavaliers 37-6, but there is still a whole lot of football left to played.

It was the first of 10 regular-season games for the Grangers, who will look to get things going in the right direction with a road win over Villa Rica on Friday.

“We don’t base the season off this game,” Burks said. “It’s going to hurt, and they’ve got to live with it for the next year because (the schools are) so close. But, we’ve got a lot of football left.”

What Burks hopes is that the players learn from the mistakes they made against Callaway.

There were special-teams miscues, costly turnovers, and while the defense performed well at times, it gave up some big plays.

Callaway also made its share of mistakes during the game, but LaGrange was unable to take advantage of them.

“Callaway, they had some mistakes, but they capitalized off of ours,” Burks said. “We didn’t capitalize off of theirs. That’s the big difference. If you make a mistake, you’ve got to be able to bounce back and go to the next play.”

When the game ended and the clock struck zero, Burks said the numbers on the scoreboard told the story.

“They see it,” Burks said. “The scoreboard told it all.”

Burks did see some bright spots.

He was happy with the ground game, with running backs Myles Johnson, Cornell Kendrick and quarterback Amad Ogletree each coming through with a number of positive runs behind an offensive line that performed admirably.

On LaGrange’s lone scoring drive in the second half, sophomore quarterback Nathan Cronic completed three passes, and Kendrick scored on a 1-yard run.

Ogletree played most of the game at quarterback, but Burks thought it was important to get Cronic some time on the field.

“I thought we ran the ball well,” Burks said. “And we got Cronic in, and we moved the ball. We knew we were going to have to use him some.”

LaGrange’s defense, meanwhile, was put in some bad situations.

There were two shanked punts in the first half that set the Cavaliers up just 20 yards from the end zone.

In the second half, a blocked punt led to a field goal, and Callaway’s final touchdown came after LaGrange failed on a fourth-down play near midfield.

Burks said it’s important for the defense to stand firm, though, even when it gets put in a bad situation.

“The purpose of defense is to hold up,” Burks said. “I don’t care if you give it to them on the one. Our mentality has to be that.”

Because of the two short punts, the Cavaliers needed to go just 40 combined yards for their two first-half touchdowns.

Dylan Johnson had a 4-yard scoring run in the first quarter, DJ Atkins had a 2-yard touchdown run in the second quarter, and Callaway led 13-0 with 3:02 left in the half.

Following Callaway’s second touchdown, the Grangers threatened to put some points of their own on the board after driving to the Cavaliers’ 26-yard line.

A fourth-down play failed, though, and the Grangers had to give up the ball.

Also in the first half, LaGrange moved the ball from its 19-yard line to the Callaway 43 before a fourth-down play was unsuccessful.

Ogletree had an 11-yard run on that drive, and Johnson had a pair of 8-yard runs.

Despite moving the ball well at times in the first half, the Grangers didn’t score, and they trailed 13-0 at the break.

Hoping to get a defensive stop to start the second half, LaGrange instead gave up a 75-yard pass play from Johnson to Braylon Sanders, and it was 20-0 with 11:03 left in the third quarter.

Once again the Grangers put a nice drive together, but they couldn’t come away with points.

With Ogletree still at quarterback, LaGrange made it to the Callaway 33-yard line.

On fourth down, the Grangers elected to punt, and the kick was blocked, setting the Cavaliers up at the 14-yard line.

That led to a Noah Stephens field goal, and Callaway led 23-0.

The Grangers then put together their best drive of the night with Cronic at the helm.

Cronic completed a 47-yard pass to Jamari Trash, and those two hooked up for an 8-yard completion later on the drive.

A pass interference penalty on Callaway put the ball on the 21-yard line, and five plays later, Kendrick’s 1-yard touchdown run put LaGrange on the board.

After an unsuccesful onside kick, Callaway scored its final touchdown on a 52-yard pass play from Johnson to DQ Wilkerson.

Callaway ran one kneel-down play, and that was that.

LaGrange will get back on the practice field this afternoon, and on Friday it will head to Villa Rica and try to get a win.

“For me, it’s just come out and play the best you can play, and hold your head up,” Burks said. “We talk about that all the time, having confidence and believing in yourself. They’ve got to learn. I hate we have to learn this way, but that’s what sports is all about.”

LaGrange High’s Willis Kemp returns a punt during the first half of Friday’s game against Callaway. Kevin Eckleberry | Daily News

http://lagrangenews.com/wp-content/uploads/sites/37/2016/08/web1_CHS13.jpgLaGrange High’s Willis Kemp returns a punt during the first half of Friday’s game against Callaway. Kevin Eckleberry | Daily News

LaGrange’s Dazmon Williams and Lequincy Shephard make a tackle on Callaway running back Cartavious Bigsby during the second half of Friday’s game. Kevin Eckleberry | Daily News

http://lagrangenews.com/wp-content/uploads/sites/37/2016/08/web1_CHS34.jpgLaGrange’s Dazmon Williams and Lequincy Shephard make a tackle on Callaway running back Cartavious Bigsby during the second half of Friday’s game. Kevin Eckleberry | Daily News

LaGrange quarterback Amad Ogletree gets a pass away to Myles Johnson during the first half of Friday’s game. Kevin Eckleberry | Daily News

http://lagrangenews.com/wp-content/uploads/sites/37/2016/08/web1_CHS6.jpgLaGrange quarterback Amad Ogletree gets a pass away to Myles Johnson during the first half of Friday’s game. Kevin Eckleberry | Daily News