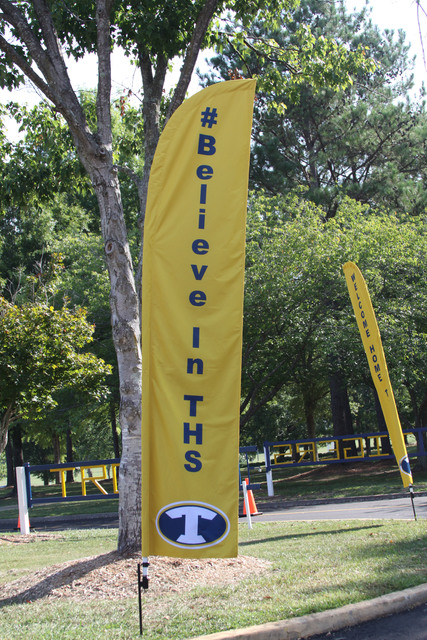 LaGRANGE — This year Troup High School has a hashtag, and teachers, students and parents are all using it to get to know a little more about each other and what is happening at the high school.

The internet identifier #BelieveinTHS, which is used on Facebook, Twitter and Instagram, started out being used by Troup High School teachers and administrators to pass on school announcements to students and parents while attempting to encourage a sense of school pride. The school is emphasizing inspiration, relationships and success in conjunction with the hashtag.

“Our hashtag encompasses what we want to see in our kids … passion and excitement for every student who enters our door,” said Michelle Ashmore, last year’s system teacher of the year and top 10 finalist for the state honor. “It’s helping to bring attention to things that our teachers and administration have been working tirelessly on for years”

The new, more open form of communication is already increasing parental involvement in programs like the parent-teacher organization and turnout for games by making it easier for parents to keep up with what is going on at the school.

“I think through social media and some things we’re doing along the way that we’re breaking down some of those barriers that have been there in the past, and inviting parents,” said Principal Chip Medders. “We’re just trying to do a better job of just letting people know that, hey, we’ve got some great things. We’ve got a great school, a great student body, a great community, and letting you know the things that are going on, and, hey, come on up here and be a part of it.”

Student involvement and discipline occurrences are also showing signs of improvement, which Medders and teachers both attribute to the home-type environment the school is encouraging with school pride and caring teachers.

“We’re a week and a half, two weeks into school, so pulling data right now on discipline and so forth wouldn’t be fair,” said Medders. “I mean it looks great right now … but I know we’ve established enough for right now that our discipline numbers — I think we dropped by just over 1,000 referrals for the year before because of doing these types of things, and this year we’re doing far more than we did last year, so I suspect that our numbers are even going to look better this year.”

As of Friday morning, there had been no students required to go to in school suspension so far this year.

“I’ve been teaching for 22 years. I’ve done all my coaching at Troup High School,” said Craig Garner, the assistant athletic director at Troup who coaches baseball and wrestling. “This is the most excitement and enthusiasm that I’ve seen at Troup High School since I’ve been in school, so it’s great. You know the job that the administrators are doing. You know, Mr. Medders coming in and starting this is the best start to any school year I’ve ever seen.”

Medders is inviting parents to meet him on Fridays at 8:30 a.m. to talk about the school and the students over doughnuts and coffee. Then tour the school with student ambassadors.