Business Spotlight: U Can Brew Too helps craft brewers get started 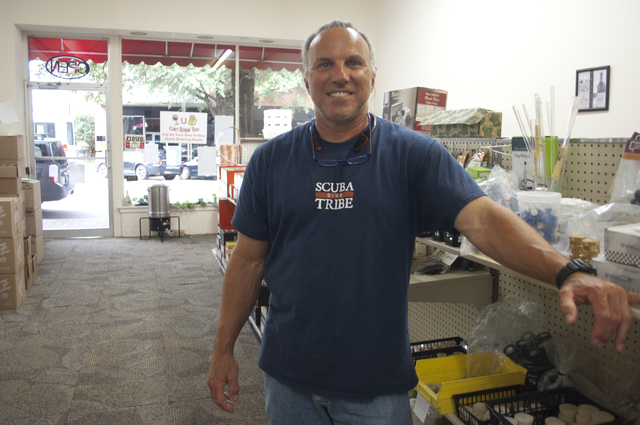 LaGRANGE — For about four years, Daryl Burton has helped craft brewers in the area get started and develop original beers and wines.

As the owner of the downtown shop U Can Brew Too, Burton told the Daily News his passion for craft brewing eventually spilled over into his professional life when he opened the store.

“I got tired of driving around getting all the ingredients,” he said. “The closest store closed down, and we used to get a lot of supplies when we’d go down to Tallahassee. We pretty much opened it (U Can Brew Too) up as a convenience to us.”

Since then, business has taken off for Burton. He said he sees between 60 and 75 customers a week at his storefront on Main Street. He helps craft brewers — including those who are just getting started and those who’ve been doing it for a long time — but that’s not the only people he helps. Burton, a retired electronics technician, also works as a full-time firefighter with Coweta County Fire and Rescue.

Because of his work schedule at the fire department, Burton has enough time to keep and eye on his store, he said, and when he’s not around, he has about five other people who man the store. They sell everything from kits to ingredients and equipment needed to make beer and wine.

One of his favorite parts about U Can Brew Too is meeting new customers, he said.

“Meeting new people and helping people brew beer and wine is the best part,” he said. “I know nobody wants to hear it, but we sell everything that a winery uses. They use the same stuff. … I’ve been to a thousand wineries and in every one of them, they have the same kit we sell back in the back.”

One of the things that’s made U Can Brew Too so successful has been the competitive prices, Burton said.

“We’ve got the lowest prices, and we’ll match anybody online,” he said. “It’s convenient for us, and we love helping people do it.”

U Can Brew Too owner Daryl Burton poses for a photo at his store at 104 Main St. in LaGrange. The store sells kits, equipment and ingredients for making craft beer and wine at home.

http://lagrangenews.com/wp-content/uploads/sites/37/2016/08/web1_BrewStoreWEB-1.jpgU Can Brew Too owner Daryl Burton poses for a photo at his store at 104 Main St. in LaGrange. The store sells kits, equipment and ingredients for making craft beer and wine at home.