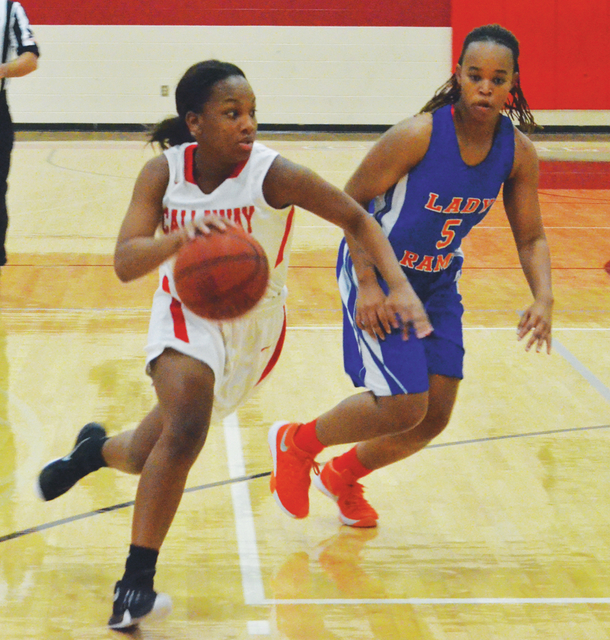 LAGRANGE – They put it all together.

The Callaway Lady Cavaliers have been struggling a bit of late, losing six of seven games heading into Monday’s road showdown against LaGrange.

Callaway delivered a complete performance against LaGrange, though.

The Lady Cavaliers surged to a 6-0 lead through two innings, and they went on to capture an 8-2 victory to improve to 4-6.

Head coach Ashley Summerlin actually felt the team began to turn things around in the final game of the Callaway Classic on Saturday.

Facing a strong Rockmart team, Callaway hung in there most of the way and ended up losing 8-2.

“The only thing I can say about that is energy and effort,” Summerlin said. “We’ve been preaching that since Saturday. We challenged them, and they stepped up against Rockmart, and today was unbelievable. They’ve got the talent to beat anybody, but you’ve got to bring that effort every day, and they did.”

The Lady Cavaliers started quickly, scoring three runs in the first inning and three more in the second to build a 6-0 cushion.

LaGrange scored a pair of runs in the fourth inning to get within four, and Callaway capped the scoring with single runs in the sixth and seventh innings.

Callaway pitcher Oeisha Jenkins was sharp, throwing seven innings of four-hit softball, and she was backed up by a defense that was tremendous.

Among the defensive highlights was a fantastic catch in center field by KeKe Talley that likely robbed Lauren Kuerzi of a home run in the first inning.

Also for Callaway, third baseman Jasmine Dukes made a nice running catch on a bunt attempt that started a double play, and Jenkins helped herself by making a catch on a hard-hit ball back to the mound.

That included Skylar Rice, who had two hits and three RBIs, as well as Jenkins, who helped herself with a hit and two RBIs.

For LaGrange, Te’a Winston, Hannah Karcher, Destiny Fitzpatrick and Shaq Sutton each had a hit, and Lauren Kuerzi walked and scored a run.

Karcher, who will be handling most of LaGrange’s pitching duties with the season-ending injury to McLain Skinner, pitched a complete game.

“We were giving them way too many outs,” Heath said. “In order for us to be successful, we have to play defense.”

In the top of the first inning, Rice had a two-run single, and after Greer kept the inning alive with a two-out hit, Sanders had an RBI base hit to make it a 3-0 game.

In the bottom of the first, LaGrange had a runner on when Kuerzi hit the ball deep to center field, but Talley made the catch at the fence for the second out.

Jenkins then got a strike out with a runner on third to end the threat.

Callaway pushed three more runs across in the top of the second.

Carlisle led off with a single, and Dukes followed with a double to put runners on second and third.

Jenkins then stepped to the plate and delivered a two-run double, and Rice followed with an RBI groundout to give Callaway a 6-0 lead.

LaGrange got two of those runs back in the bottom of the fourth.

Kuerzi reached on a one-out walk, and Karcher followed with a base hit.

Kuerzi and courtesy runner Ricki Cruzado both scored on wild pitches, and Callaway’s lead was down to 6-2.

Jenkins held LaGrange hitless the rest of the way, and Callaway tacked on two more runs late in the game.

In the sixth, Carlisle reached on a out-out single, and she scored on a double by Dukes.

Then in the seventh inning, Rice doubled, and she scored on an RBI single by Greer.

LaGrange will return to its Region 5-AAAA schedule today with a home game against Troup, with first pitch set for 5 p.m.

Callaway’s next game is at Upson-Lee on Thursday.

Callaway’s KeKe Talley follows through on a swing during Monday’s game. Talley didn’t have any hits, but she made a catch at the fence in the first inning that may have saved two runs. Kevin Eckleberry | Daily News

http://lagrangenews.com/wp-content/uploads/sites/37/2016/08/web1_CHS3-4.jpgCallaway’s KeKe Talley follows through on a swing during Monday’s game. Talley didn’t have any hits, but she made a catch at the fence in the first inning that may have saved two runs. Kevin Eckleberry | Daily News

LaGrange’s Te’a Winston gets a lead off third base during the first inning of Monday’s game. Kevin Eckleberry | Daily News

http://lagrangenews.com/wp-content/uploads/sites/37/2016/08/web1_CHS2-4.jpgLaGrange’s Te’a Winston gets a lead off third base during the first inning of Monday’s game. Kevin Eckleberry | Daily News