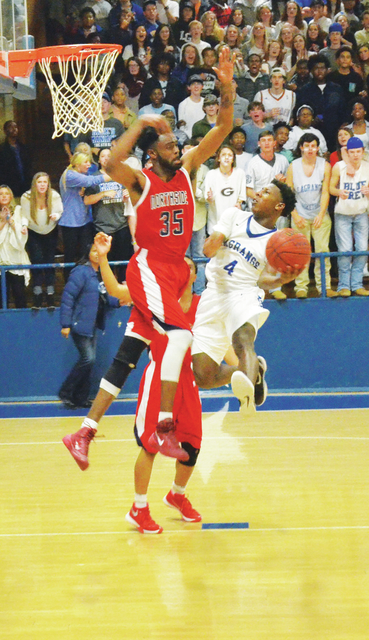 LAGRANGE – It was on-the-job training.

In the second half of last week’s game against the Callaway Cavaliers, LaGrange sophomore quarterback Nathan Cronic was handed the keys to the offense.

While the Grangers had moved the ball well, they’d been unable to put any points on the board, and head coach Dialleo Burks hoped Cronic could provide a spark.

The first two possessions with Cronic at the helm couldn’t have gone any worse.

There was a lost fumble on the first possession, and an interception return for a touchdown on the second one.

Part of the job description of being a quarterback on any level involves overcoming adversity and shrugging off mistakes, though, and Cronic showed he has the ability to do that.

On his third possession at quarterback, Cronic directed an 80-yard touchdown drive, and it was a highlight of a difficult night for LaGrange, with Callaway capturing a 37-6 victory.

For Cronic, it was valuable experience, and he’s hoping to use it be a more effective player the next time he’s called upon.

“At first, it’s a little nerve-wracking,” Cronic said. “After the first play, the jitters kind of go away, and you just play football. I feel like I’ve gotten better since the Heard County (preseason game). Every game, I think I’m improving, and I hope I keep doing that.”

Last season, LaPerion Perry was LaGrange’s quarterback, and he was an all-state player.

Perry had offseason hip surgery, though, which meant someone else was going to be the quarterback for the season opener against Callaway.

During the summer, Ogletree, Cronic, freshman Charles Crawford and sophomore Jakoby Smith were all working at quarterback, and all four of those players saw significant playing time in the preseason games against Heard County and Newnan.

When it came time for head coach Dialleo Burks to choose a quarterback for the Callaway game, he went with the man with the most experience.

Ogletree was the quarterback in 2014, and he helped lead the Grangers to the state playoffs.

Ogletree was also a major contributor last year as a running back and wide receiver while Perry played quarterback.

The plan coming into the Callaway game was to get Cronic on the field at some point, and Burks did that in the second half with the Grangers trailing 23-0 in the third quarter.

The first two possessions with Cronic in the game went poorly.

There was a fumble on a botched handoff, and then the pick six that gave Callaway a 30-0 lead.

“As a quarterback, you’ve got to have a short memory,” Cronic said. “You can’t go out there thinking about the next play, or you’re going to throw another (interception).”

Cronic completed two more passes on the drive, including one that covered eight yards to Thrash, and there was also a pass interference penalty on Callaway.

Running back Cornell Kendrick completed the 10-play, 80-yard drive with a 1-yard touchdown run, and the Grangers were on the board.

“After (the interception), I probably did get a little frustrated. I shouldn’t have,” Cronic said. “But then I hit one to Jamari for about 50 yards. It’s all about coming back out there and having a short memory, and not thinking about it, and executing the next possession.”

LaGrange offensive coordinator Jay Floyd said making mistakes is “part of being a younger player,” and he also told Cronic that even the best quarterbacks will throw the ball to the other team.

“He threw the interception. He came off, and he was mad,” Floyd said. “I told him, if you play long enough, you’re going to throw ‘em. That’s the way it is.”

Dustin Ward, LaGrange’s quarterbacks coach, said Cronic has come a long way since the start of the summer.

“He’s progressed since June 1,” Ward said. “He was very raw. But he’s grown up a lot. I was proud of him jumping into the fire (against Callaway). Being down 20-0, that’s not the best situation.”

The Grangers moved the ball when Ogletree was at quarterback, but they were unable to produce any points, in part because of a series of untimely penalties.

“We kept having penalties,” Floyd said. “Everytime we got something going and we’d, move the ball, we’d have something that would back us up.”

Moving forward, whether Ogletree is the quarterback or not, he will be a key part of LaGrange’s offense.

Smith, meanwhile, has moved to wide receiver, leaving Cronic and Crawford at quarterback along with Ogletree.

Cronic said all four players get along great and have supported each other throughout the summer.

“We’re pretty close, the quarterbacks,” Cronic said. “I’ve known Charles for a while, and me and Jakoby go back to middle school. And Amad, I’ve been knowing him, and his brother (Jordan) for awhile.”

LaGrange will look to even its record at 1-1 with a win at Villa Rica on Friday.

LaGrange quarterback Amad Ogletree hands the ball off to running back Myles Johnson during last week’s game. Both players had some big plays during the Callaway game. Kevin Eckleberry | Daily News

http://lagrangenews.com/wp-content/uploads/sites/37/2016/08/web1_LHS1-4.jpgLaGrange quarterback Amad Ogletree hands the ball off to running back Myles Johnson during last week’s game. Both players had some big plays during the Callaway game. Kevin Eckleberry | Daily News