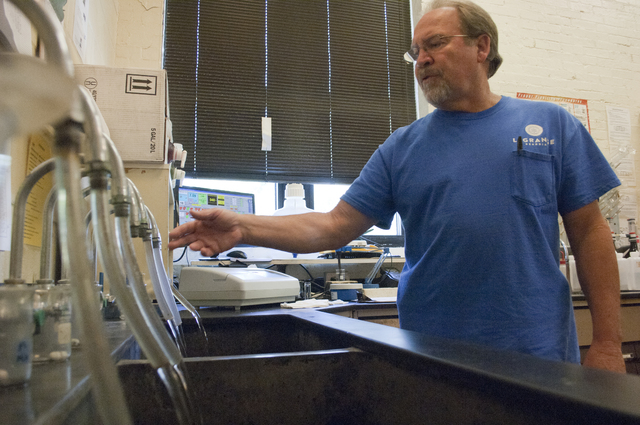 LaGRANGE — It might taste a little earthy, but there’s nothing wrong with the city’s water, officials said Tuesday.

“We noticed it a little on Thursday at the (water treatment) plant,” Bowie said. “It was faint enough, but if you were looking for it, you could find it.”

He assures the water is “totally safe,” and that the dirt-like taste is “just an aesthetic issue.” By the time the water reaches customers taps, the algae has been killed, so it’s not the algae people are tasting. Rather, when the algae and other bacteria die, they release a chemical called Geosmin. As it turns out, humans are exceptionally good at tasting it.

“Geosmin is extremely easily detected by the human taste and smell sense,” Bowie said. “Even in parts per trillion, the human nose can detect it. It’s a very strong, noxious type of chemical. It’s not in a big enough quantity to be dangerous, but you can tell it’s there.”

Bowie’s right. According to the Microbac Laboratories, a Pittsburgh-based commercial laboratory company, it is common for the average person to notice the presence of Geosmin in the 10 to 30 part per trillion concentration range.

City water employees have added a few chemicals to cut down on the taste, like chlorine dioxide and carbon. They’ve also switched the lake-side intake to two deeper pipes in an effort to start drawing water that’s not exposed to sunlight, which feeds algae. They made that move Saturday.

On Tuesday at the city’s water intake plant on Cameron Mill Road, Keith Hester, a native-LaGrange resident who serves as the water superintendent, said he’s noticed the taste in the water, but he’s not concerned. In fact, as he sipped a Styrofoam cup full of water, he said he’s confident in the eight quality control employees he oversees.

“These are not people who just come in off the street,” Hester said. “They’ve got to take official classes, and take state exams. Anything that can happen in a water plant, they have to know how to deal with it.”

The technicians check for chlorine levels, turbidity, which is basically the cloudiness of the water, and the pH level. Ideally, the water’s pH sits at a nice, middle-of-the-road level of 7.3. On Tuesday afternoon, it did.

“Most of the time, there’s not a lot of discrepancy throughout the day,” Foster said. “As far as the algae goes, when you kill it, that’s when you get the taste. We’ve been pretty on top of it this year, we’ve been fortunate.”

The water treatment process is simple, but precise.

It begins at the lake intake, where a pump station juts into a cove of West Point Lake just northeast of Highland Marina Resort. The water is pumped to a man-made reservoir behind the water treatment plant that stores about 12 million gallons.

It’s the last time the water will be pumped until after it’s turned into tap water and pumped into town. The entire treatment process is gravity fed.

The water in the man-made reservoir is continuously moving and takes about a day and a half or two days to make its way into the first treatment phase, where chemicals — carbon, chlorine dioxide and aluminum sulfate — are added.

Next, the water flows into two basins, which are basically concrete pools where the water settles. One is visible from Cameron Mill Road; it looks like a big white fence from the road, but it’s actually the side of the basin.

Next, the water flows into 14 different filters. The filters are layers of hollow bricks covered by gravel, then sand and at the top, anthracite, which is a variety of coal. The water flows through the layers, which pull out contaminants. After filtering, the water is treated with one last dose of chemicals — a little more chlorine and some fluoride.

The sight well is the last opportunity to see the water before it flows into the city’s 400 miles of water pipes. It’s a glass-covered station inside the water plant, where people can look down into what looks like a swimming pool. Tiny black and white tiles undulate as about 12 feet of water shimmer a story below. From there, the water flows into a holding tank before being pumped into town.

The plant has the capacity to treat about 23 million gallons per day, but right now it’s processing about 8 million gallons each day, said Hester, the water superintendent. That water serves not just the city of LaGrange, but also West Point, Hogansville and Greenville.

As far as the earthy taste goes, officials expect the algae bloom to be over by early September. Throughout the entire time, plant operators like Foster will continue to monitor the water’s quality. It’s a tedious job, but Foster said he doesn’t mind.

“Mama used to get onto me about playing in the water, but now, I get to do it for a living,” he said with a laugh.

The sight well, pictured, a glass-covered viewing station at the city’s water treatment plant, is the last time the treated tap water can be seen before it enters the city’s 400 miles of water pipes. About 12 feet of water sits in a pool about a story below.

http://lagrangenews.com/wp-content/uploads/sites/37/2016/08/web1_Water03WEB.jpgThe sight well, pictured, a glass-covered viewing station at the city’s water treatment plant, is the last time the treated tap water can be seen before it enters the city’s 400 miles of water pipes. About 12 feet of water sits in a pool about a story below.

Darrell Foster, a water plant operator, shows six different faucets that flow water from each of the water treatment phases at the city’s water plant on Cameron Mill Road on Tuesday. Currently, about 8 million gallons of water flows through the plant each day.

http://lagrangenews.com/wp-content/uploads/sites/37/2016/08/web1_Water01WEB.jpgDarrell Foster, a water plant operator, shows six different faucets that flow water from each of the water treatment phases at the city’s water plant on Cameron Mill Road on Tuesday. Currently, about 8 million gallons of water flows through the plant each day.