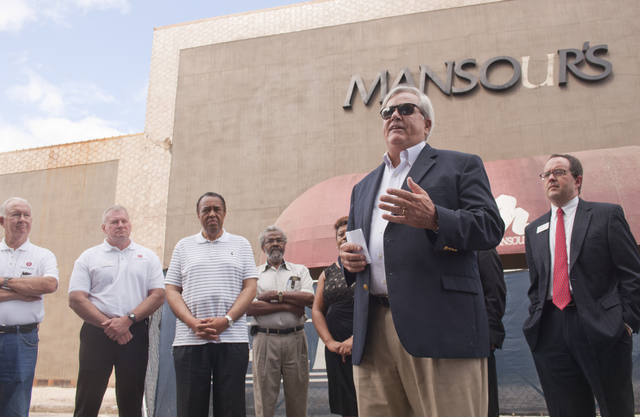 LaGRANGE — It’s going to take more than a sledgehammer to bring down the Mansour’s building to make way for a new downtown hotel, but that didn’t stop officials from taking a swing Wednesday.

During a ceremonial “demolition” in which gold-painted sledgehammers were whacked against the building’s facade, elected officials, board appointees and developers hailed the upcoming demolition. Mayor Jim Thornton called it a long-awaited step in the right direction for downtown LaGrange.

“This is a very important day in the life of LaGrange,” Thornton said. “It’s a significant occasion as we commence demolition and begin construction of a Courtyard by Mariott hotel. … This is an opportunity to turn a page and open a new chapter.”

Josh Chapman of Linco Development Company, a partner in the hotel project, said the hotel would be open in 12 to 18 months. He called the Mansour’s building an “active construction site,” and said crews are currently working on environmental issues inside the building. The building will come down in three weeks, he said, and within a month, the site will be a hole in the ground where the hotel will be built.

A 200-space parking deck planned to go behind the hotel will be built first, Chapman said, and “from there, we’ll start the hotel.”

Speer Burdette, president of the Callaway Foundation, which has gifted $4 million toward the construction of the public parking deck, said the foundation was “happy to be a part of this (project),” and called the new hotel progress for downtown LaGrange.

“The deck will benefit downtown businesses, churches and restaurants,” he said, noting the structure must be open to the public as a condition of the foundation’s $4 million contribution.

The city of LaGrange is contributing $321,780 toward demolition of the Mansour’s building.

The city will fund the hotel to the tune of $2.75 million using the tax allocation district. The Downtown LaGrange Development Authority will act as the conduit of the money and the city will purchase the note, which has a fixed interest rate of 3.5 percent. The debt will be repaid using ad valorem taxes collected from the hotel.

The city has also agreed to use a portion of hotel-motel taxes collected specifically at the hotel to maintain the exterior of the building along with the adjacent 200-car parking deck. Under the agreement, the city may also use the maintenance fund to recondition or repair the hotel’s lobby if wear and tear occur from people passing through it from the parking deck to Lafayette Square. The maintenance fund is not to exceed $250,000 in holdings, and is voided if the hotel is sold to a third party, or when the tax allocation district, which is partially funding the hotel, expires.

The approximately 90-room hotel will employee about 30 people and have various amenities including a pool, fitness room, bar and restaurant.

Bobby Carmichael, director of the Downtown LaGrange Development Authority, speaks at a ceremonial demolition event Wednesday in front of the former Mansour’s building downtown. The building is slated for demolition, after which a hotel will be built.

http://lagrangenews.com/wp-content/uploads/sites/37/2016/08/web1_Mansours01WEB.jpgBobby Carmichael, director of the Downtown LaGrange Development Authority, speaks at a ceremonial demolition event Wednesday in front of the former Mansour’s building downtown. The building is slated for demolition, after which a hotel will be built.