Columnist: How Trump is costing other Republican candidates 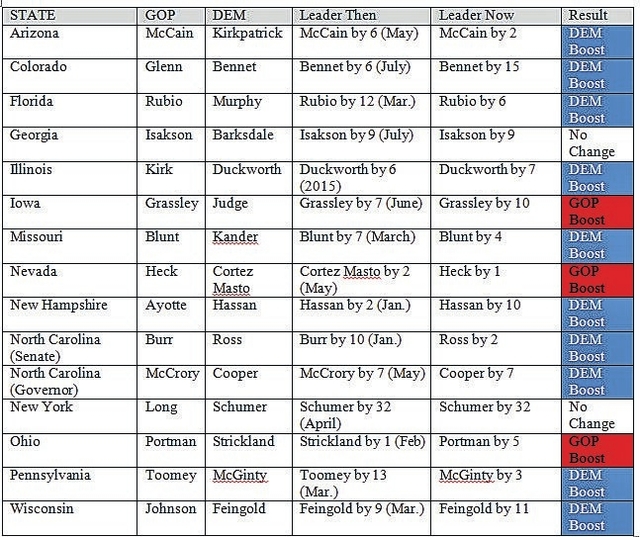 Before the RNC, the Fiscal Times declared that Trump was “not as much of a drag on the ticket as some feared.”

After a bad month for the GOP nominee, I decided to test that argument to see if that was still the case. In 15 races for the U.S. Senate and governor, Democrats boosted their numbers in 10 of those cases, and held two others constant, showing “the Trump effect” was bad for the GOP.

In Arizona, 2008 presidential nominee and GOP Sen. John McCain is within the margin of error, after having a more comfortable lead back in May. Democratic Sen. Michael Bennet (Colorado), meanwhile, has opened up a double-digit lead on his opponent, after leading by 6 points a month ago. Florida GOP Sen. Marco Rubio has seen his lead over Democratic Congressman Patrick Murphy cut in half.

Early polls showed Illinois Congresswoman Tammy Duckworth with a 6 point lead over Sen. Mark Kirk, a Republican, though his own poll had it a statistical dead-heat. But now her lead is up to seven points over Kirk.

Missouri GOP Sen. Roy Blunt, a Republican, was supposed to win re-election, but he finds his lead over Jason Kander narrowing somewhat. And in New Hampshire, GOP Sen. Kelly Ayotte’s 2 point lead has been replaced by a 10 point advantage to New Hampshire Gov. Maggie Hassan, a Democrat.

In March, Pennsylvania Sen. Pat Toomey was prevailing by 13 percentage points in his race against state environmental official Katie McGinty. Now she’s pulled ahead by 3 points. Former Wisconsin Sen. Russ Feingold, who was beating Ron Johnson — the man who ousted him six years ago — by 9 points, now boasts a double-digit lead.

Data was unavailable for the Indiana Senate race, but given the late entry of former popular Democratic governor and Sen. Evan Bayh, and the shifting of the race from the Republican column, one can hardly conclude that this is a positive sign for the GOP in the Hoosier State.

Three Republicans have been able to increase their lead, despite a bad post-RNC for Donald Trump. Nevada Congressman Joe Heck has regained a 1 point lead over Democratic Rival Cortez Masto in the race for Harry Reid’s Senate seat.

Iowa Sen. Chuck Grassley is now up by 10 points, instead of 7, over Democratic challenger Patty Judge. And Ohio Sen. Rob Portman increased his lead to 5 points over former Ohio Gov. Ted Strickland, who was leading by a point earlier this year.

But these boosts in popularity have hardly been the result of Trump’s strong candidacy. Even though the RNC was held in Cleveland, Ohio, Portman largely stayed away.

In fact, he’s shied away from Trump in general, and regained his lead based on an independent streak, focusing on education, and capitalizing on Strickland’s mistakes.

Two incumbents in the survey have been able to maintain their current position. New York Sen. Chuck Schumer, a Democrat, maintains his 32 point lead while Georgia Sen. Johnny Isakson has re-established his nine point lead over Democratic businessman Jim Barksdale.

Critics may claim that I am counting slight deviations for Democrats as boosts for the party. I am doing the same for Republicans, however, applying the same standards, using data from realclearpolitics except for the Duckworth-Kirk race, where the site did not pull up the polls, and I had to rely on other sources.

It is important to note that these findings represent a trend for cases of Democratic incumbents, Republican incumbents and open seats. No congressional scandal or unpopular legislation can account for these trends. And those Republicans faring better or holding serve managed to stay away from Donald Trump.

The GOP would be wise to spend their money preserving their congressional majority, rather than send it to a candidate who has been a drag on the ticket.