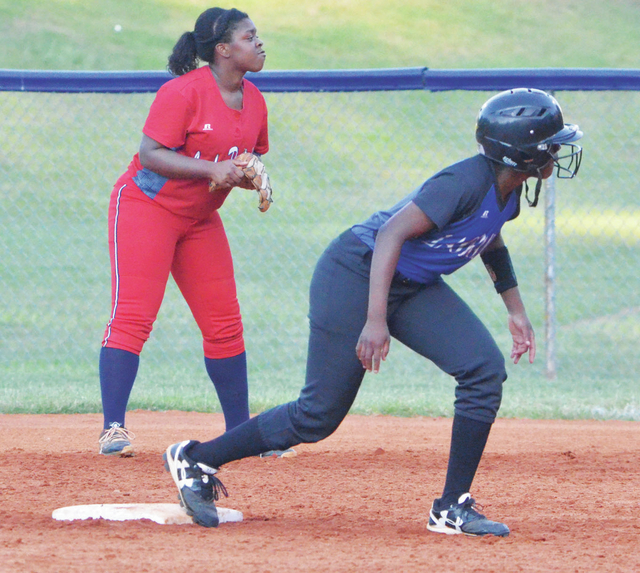 LAGRANGE – After getting a big win over the rival Troup Lady Tigers earlier in the week, the LaGrange Lady Grangers were hoping to keep that momentum going against Sandy Creek on Thursday.

LaGrange’s softball team rolled to a 14-2 home win to even its Region 5-AAAA record at 2-2.

Senior Lauren Kuerzi, who led LaGrange’s offensive effort with three hits and five RBIs, said it was important for the team to build on the victory over Troup.

“Troup had beat us (earlier in the season), so we were determined to come back and get that win,” Kuerzi said. “After that, we knew we had to come in and get the job done today. We’re playing well. We’re excited.”

Kuerzi did her part to make sure it was a winning day for LaGrange.

Among Kuerzi’s three hits was a three-run home run that was part of a five-run fourth inning.

Kuerzi hit five home runs during her junior year, and she’s only one shy of that total with a whole bunch of softball remaining this season.

Te’a Winston also had a big day for LaGrange with three hits, an RBI and three runs scored, and Mo Strozier and Destiny Fitzpatrick each had two hits and an RBI.

Hannah Karcher had a hit, and Shaq Sutton drove in a run.

Karcher pitched the four-inning complete game, giving up five hits and two unearned runs with seven strikeouts and no walks.

LaGrange jumped on top with a run in the bottom of the first inning.

Winston led off with a single, and she later scored when Kuerzi reached on an error.

LaGrange added three more runs in the second inning to build a 4-0 lead.

Kuerzi had an RBI single in the inning, and another run scored when Sutton was hit by a pitch with the bases loaded.

Sandy Creek pushed a pair of unearned runs across in the top of the third inning to get within two, but LaGrange broke it open with five runs in the bottom of the inning.

Winston and Kuerzi had RBI hits in the inning, and another run scored when Sutton reached on an error.

Karcher worked around a one-out single in the top of the fourth to keep it a 9-2 game, and LaGrange finished it with five more runs in the bottom of the fourth.

With two runners on, Kuerzi rocketed the ball way over the left-field fence, and it collided with the indoor hitting facility that’s about 20 feet beyond the fence.

After Karcher reached on an error, Fitzpatrick had an RBI double that pushed the lead to 12 and brought the run rule into play.

LaGrange is off until Tuesday when it visits region foe Chapel Hill.