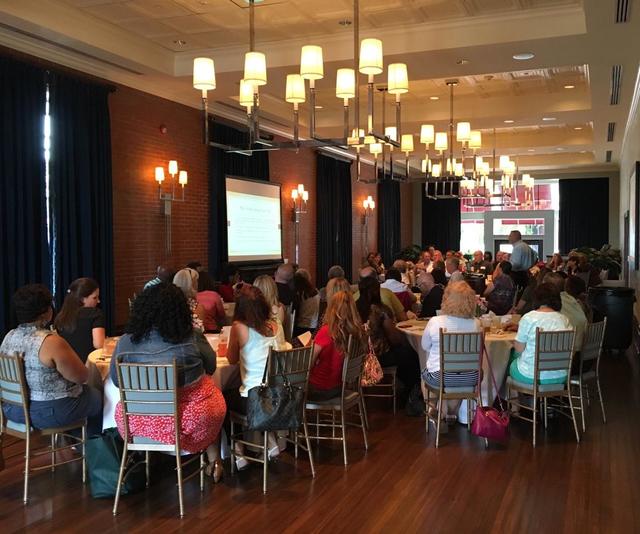 LaGRANGE — Members of the local faith community with law enforcement officers and staff of the Coweta Judicial Circuit learned this week the horrors of domestic violence.

The duo shared some startling statistics during two separate training sessions earlier this week in LaGrange and Warm Springs.

“According to the state’s fatality review, within a five-year period before a victim of domestic violence died, 80 percent of them had contact with law enforcement. Either they were called out or the victim may have gone to them,” said Bedingfield. “Thirty-eight percent of fatalities reached out to their faith community, such as a pastor or rabbi. But only 16 percent of the victims called a domestic violence shelter before their deaths.”

The statistics showed Bedingfield that more needed to be done to educate churches, organizations and first responders about the resources available to victims of domestic violence should they reach out for help.

“We want to strengthen and build the trust between the faith community and law enforcement officers and domestic violence victims,” Bedingfield said. “On Thursday, we showed officers a little bit more about how to write up reports on domestic violence situations and helped them understand the victims more and why they don’t leave their abusers. I know it can be frustrating for them, but there are reasons they might not leave their abusers.”

But Bedingfield believes the training sessions are making a difference.

“Georgia is 17th in nation in incidences where a man kills a woman in a domestic violence situation,” she said. “For many years, the state ranked in the top 10. We continue to improve and I believe it is events like these that will continue to help with that.”

Harmony House, a United Way agency, will host another domestic violence workshop next week called Beyond the Bruising. The all-day event will feature several guest speakers and break out sessions on different topics, such as stalking, gangs and domestic violence, sex trafficking, the effects of domestic violence on children and more.

“I would like to empower people to speak up about the abuse and know domestic violence is not just a bruise or cut,” Bedingfield said. “It’s emotional, it’s brain washing and it can tear down a victim’s self-esteem. … Domestic violence goes far beyond the physical abuse.”

The Beyond the Bruising program will take place on Sept. 1 in the Callaway Conference Center at the West Georgia Tech campus on Fort Drive.

People must sign up for the workshop and there is a registration fee of $20. Lunch will be provided.

Anyone wishing to register for the class can visit the Harmony House website at www.harmonyhousega.org, or go to their Facebook page.

Members of the faith community pack into Del’Avant in downtown LaGrange on Wednesday to hear ways they can help victims of domestic violence. The training workshop was one of three being provided by Harmony House, a state-certified domestic violence shelter and organization in the local area.

http://lagrangenews.com/wp-content/uploads/sites/37/2016/08/web1_FullSizeRender_2.jpgMembers of the faith community pack into Del’Avant in downtown LaGrange on Wednesday to hear ways they can help victims of domestic violence. The training workshop was one of three being provided by Harmony House, a state-certified domestic violence shelter and organization in the local area.