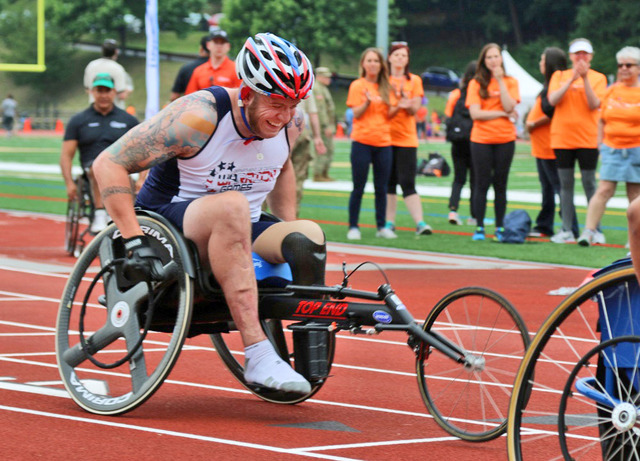 LaGRANGE — At 6-foot-6, Adam Hygema towers above the rest of his colleagues on the laboratory services team at WellStar West Georgia Medical Center. As a phlebotomist, he may even seem larger than life to patients looking up to him from a hospital bed.

But the calm in his albeit in-charge voice, his subtle humor, his “I-know-what-you’re-going-through” vibe, all do wonders at putting his patients at ease.

“I love working in a hospital setting,” Hygema, 29, said. “When I worked in medicine in the military, I loved seeing my patients get better with time and knowing that I helped them in some way. And now, as a phlebotomist, I may only have a little bit of time with each patient, but in that 30 seconds or so, at least I might be able to make them smile.”

A secretly wounded warrior and athlete

As he has visited patients in the last two weeks, some of their rooms held the faint background noise of Rio’s Summer Olympic Games. Commentators’ voices boomed and crowds reacted as athletes made history, broke records and exceeded personal bests.

Hygema is familiar with those sounds. As a four sport athlete with a national reputation, he is well versed in the rigors of competition.

In June, Hygema competed in the 2016 Department of Defense Warrior Games in West Point, New York, and the 2016 Invictus Games at the ESPN Wide World of Sports Complex in Orlando, Florida, this past May. The games are an opportunity for wounded armed services personnel and veterans to compete on a global level.

At the Warrior Games, Hygema won bronze medals in shot-put and the 100-meter dash and also competed in upright cycling and the 200-meter dash. As a member of the Invictus Games’ U.S. wheelchair basketball team, he earned a gold medal as he helped Team USA beat the United Kingdom by 48-16 in the finals.

At WGMC, it’s not immediately evident to Hygema’s colleagues why he would be competing in national and international competitions of wounded armed service personnel. His subtle limp probably wouldn’t raise an eyebrow. But when he slightly raises the legs of his pants, one can see that Adam has a story.

The car crash that changed the course of Hygema’s life happened in 2007, when he was 20 and stationed in the U.S. Navy in Virginia. He had enlisted in the Navy two years earlier in his hometown of Cudahy, Wisconsin, after a chance meeting with a recruiter in the parking lot at a local technical college, where he was stranded after his car broke down.

“After high school I had wanted to work in the medical field, but I had always wished there was a way I could do it without all the years of going to school,” Hygema said. “The recruiter mapped out how I could enlist and be treating patients in the Navy in six months.”

After boot camp in Great Lakes, Illinois, he was stationed at Camp LeJeune in North Carolina for a year for combat medical school training. He also worked in the pharmacy at Camp LeJeune Naval Hospital.

The Navy then transferred him to Portsmouth, Virginia, home of the Naval Medical Center, where he worked primarily in the wound care clinic.

On Nov. 3, 2007, Hygema and his Navy colleagues decided to celebrate Halloween together because they had all been working on Halloween night. A friend drove them to the Halloween party in nearby Suffolk as Hygema slept in the passenger’s seat. They lost control of the car at a speed between 85 and 105 mph, ran off the road and struck a tree. The accident broke the vehicle in half.

Hygema said he lost his left leg as he was being propelled through the windshield during the crash. The accident degloved the majority of his right shin and caused extensive nerve damage. The driver did not survive the crash.

“I don’t remember any of it, but I was told that when the EMTs arrived, I was instructing them how to do their jobs,” he said. “They also told me that because of my height, it was quite a struggle to fit me into the ambulance and then into the helicopter.”

Recovery and a new career

Hygema spent the first two months after the accident at a Sentara Healthcare hospital, where he was in a drug-induced coma for six weeks. From there, he was transferred to Naval Medical Center Portsmouth for three weeks and then spent four months in the polytrauma unit at the Richmond VA Medical Center.

When it was time to go home, Hygema returned to family in Milwaukee to continue to heal. He received an honorable discharge from the Navy.

“I was going to be a lifer,” the retired Navy hospital corpsman said of his initial plans to flourish in a Navy career in the medical field. “I loved military medicine, I loved my job, I loved the hospital setting and I loved my patients. And then, it was all gone, and I just thought, ‘What am I going to do?’

After trying his hand at a few jobs outside the medical field and earning an associate’s degree in information systems, Hygema realized after he moved to Georgia in 2009 that his background could help him easily land a phlebotomy certification. He began working at his current PRN job as a phlebotomist at WGMC about nine months ago.

As he continues to work in civilian medicine, he has found that adaptive sports have helped him find a home.

“In high school, I was on the football team, was on the track and tennis teams for a year, but no basketball,” said the Invictus Games’ Team USA wheelchair basketball gold medalist. “I was lanky and had no hand-eye coordination.”

Auburn may add wheelchair basketball as an intercollegiate sport, and if it does, Hygema may end up going back to school. His colleagues and friends are likely to hear that he will be competing in the 2017 Invictus Games in Toronto or in the 2018 Games.

He’s not speculating too much what is going to happen in the future, for Hygema knows how the best-laid plans can drastically change in an instant.

“I love competing in the games and getting the chance to spend time with other veterans,” he said. “And I love being in a hospital and know that what I do helps others.

“Other than that, I’m just taking things one day at a time.”

Adam Hygema, a phlebotomist at WellStar West Georgia Medical Center and retired Navy hospital corpsman, wears the three medals he earned at the international Invictus games and the Warrior Games earlier this year. He earned a gold medal as a member of the U.S. wheelchair basketball team.

http://lagrangenews.com/wp-content/uploads/sites/37/2016/08/web1_AdamHygema.jpgAdam Hygema, a phlebotomist at WellStar West Georgia Medical Center and retired Navy hospital corpsman, wears the three medals he earned at the international Invictus games and the Warrior Games earlier this year. He earned a gold medal as a member of the U.S. wheelchair basketball team.

Adam Hygema, a phlebotomist at West Georgia Medical Center, competed in four events at the 2016 Department of Defense U.S. Warrior Games in West Point, N.Y., earlier this year, winning bronze medals in the 100-meter dash and in shot-put.

http://lagrangenews.com/wp-content/uploads/sites/37/2016/08/web1_adamtrack.jpgAdam Hygema, a phlebotomist at West Georgia Medical Center, competed in four events at the 2016 Department of Defense U.S. Warrior Games in West Point, N.Y., earlier this year, winning bronze medals in the 100-meter dash and in shot-put.