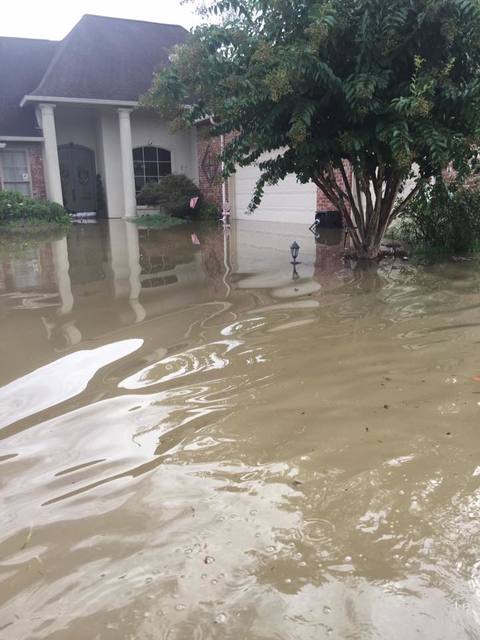 LaGRANGE — It’s a small world, even in times of crisis.

As thousands of Louisianans race against the clock to tear out quickly molding Sheetrock from their flooded homes, items donated by residents of Troup and Heard counties are helping them get back to normal — including a woman originally from LaGrange.

Stephanie Purdy, 44, was born in LaGrange and still has family here, but now lives in Prairieville, Louisiana.

She and her family escaped the brunt of the flood damage — water was about 6 inches from their home — but their neighbors weren’t so lucky.

“The only damage that we had was in our yard and our carport,” she told the Daily News by phone Friday. “We lost all the cold food, but that’s nothing compared to the people across the street. They had 3 feet of water in their home.”

Purdy credits a slight ridge in the terrain for sparing her home.

Since the flood waters receded, Purdy has been running errands for her neighbors, going to a local church where supplies are available at no cost. The Louisiana church, Fellowship Church, is acting as a clearinghouse for donations collected by LaGrange resident Brandon Brooks and his employer, Statewide Mortgage, along with Prospect Church in Franklin. Reached by phone Friday, Brooks said scores of people in Troup and Heard counties donated to the effort and he thanked them for their support.

“They sent a truckload of supplies,” Purdy said of all the donors in Troup and Heard counties. “It was everything we’d asked for. A lot of people are starting over.”

Purdy described the scene in Louisiana as chaotic. She said streets are lined for miles with debris — everything from torn out Sheetrock to furniture destroyed by flood waters.

Making the eight hour drive to Louisiana on Tuesday, Brooks took photos of the rubbish-laden streets with his mobile phone.

He said the victims of the flooding are in “serious trouble,” and the majority of homeowners don’t have flood insurance because the area has never flooded before.

Brooks said he was motivated to organize the donation drive when he realized that mailing a few items just wouldn’t be enough.

“Originally, our church was going to mail things down there, but then last Friday morning, a week ago, I woke up and realized I had to do more than what I was doing,” he said. “I did a social media blitz and talked to both sheriffs in Heard and Troup counties because I needed a drop-off point. They agreed to have the sheriffs’ offices as drop-off points. I made a bunch of phone calls and just decided to drive it down there myself.”

Now that supplies are arriving, Purdy said the real need is volunteers to help clean up before mold can set in and ruin people’s houses.

“It’s starting to get back to normal, but there’s still so much hurt and devastation,” she said. “We need the manpower to get the houses done.”

Anyone interested in donating supplies or learning about how they can aid in Louisiana’s recovery may contact Brandon Brooks at 706-302-7638.

Debris from flooding can be seen roadside in Louisiana on Tuesday.

http://lagrangenews.com/wp-content/uploads/sites/37/2016/08/web1_FloodVictim01.jpgDebris from flooding can be seen roadside in Louisiana on Tuesday.

Donated items are loaded into a box truck in LaGrange to be driven to Louisana to help flood victims.

http://lagrangenews.com/wp-content/uploads/sites/37/2016/08/web1_FloodVictim02.jpgDonated items are loaded into a box truck in LaGrange to be driven to Louisana to help flood victims.

A home is nearly flooded in Louisiana after severe rain drenched the area earlier this month.

http://lagrangenews.com/wp-content/uploads/sites/37/2016/08/web1_FloodVictim03.jpgA home is nearly flooded in Louisiana after severe rain drenched the area earlier this month.