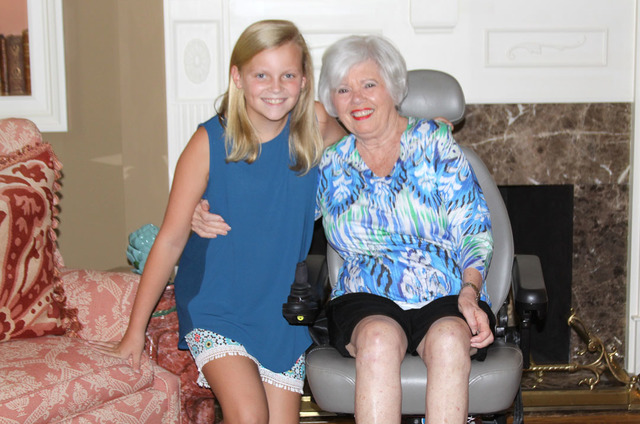 LaGRANGE — This week, we interviewed Judy Boggus, a LaGrange native who was diagnosed with ALS — amyotrophic lateral sclerosis — two years ago, and Caroline Kersey, a fifth grader who has been both a friend and a neighbor to Boggus as she experienced the effects of the disease.

LaGrange Daily News: What made you decide to start coming over here?

Caroline Kersey: Well, we live kind of right down the street, and, I don’t know, I think Mrs. Judy’s been friends with my family for a long time. And so I just like to come over here because she’s an easy person to talk to and she’s fun to be around.

LDN: Have you done the ice bucket challenge?

Kersey: I did it last year. I haven’t done it this year yet, but I’m probably going to do it sometime.

LDN: What do you feel like you’ve learned about ALS, just being able to spend time with Mrs. Judy?

Caroline: Well, we also have another friend named Dr. Pat (Hunnicutt), so he’s had ALS a little bit longer than Mrs. Judy has so we went to see him a lot, and we still go see him a lot. … I kind of knew about it before Mrs. Judy had it. I just know that it starts at your feet and it kind of works its way up, and then it makes your muscles not be able to move.

Boggus: (Hunnicutt) and I grew up together. Both members of First Presbyterian Church. Both same Sunday school class. He was my dentist before Dr. (Doug) Kersey (Caroline’s father) is my dentist. (Hunnicutt) also was in my art class. We took art together, and he’s been diagnosed four years this August. And like Caroline, we were going to see him as good friends to show support, and when something was going up with me that threw up signs of a motor neuron disease. My appointment at Emory was at 8:30 Monday morning. Dr. Pat called me, the phone rang at 8:15 in the doctor’s office. “Judy, have you found out what’s wrong yet,” and I said not yet. But we called him when we were going home and told him, but of course it was a big shock, wasn’t it Caroline? Because she had seen him and knew what I was about to face.

LDN: Is there anything else that you’d like to add?

Kersey: Well, you know, she was talking about her art classes. She loved to paint, so she gave me a lot of her painting stuff, so sometimes I’ll paint pictures for her. And then my brother and sister, they’ll draw pictures, and then we’ll bring them over here with the pimento cheese and the ice cream.

Boggus: They do. They are just the best little neighbors. … You would call me on a Sunday afternoon and say, “Mrs. Judy, are you home? Can I come over and see you?” It just brightened my day. Always brightened my day. … What have you learned when you go to visit Dr. Pat (Hunnicutt)? Or to visit me?

Kersey: I learned about the disease, and I learned that Dr. Pat and Mrs. Judy are the only people that I’ve met with ALS, but I just know that they make the best out of what they can, and then they are always really happy to have company. So, that’s why I like to come over here, and that’s why we visit Dr. Pat a lot.

Boggus: And that is so true with this, just like I told you, she is a bright spot, and the fact that she picks up on that, and doesn’t stay in her sixth grade world, or fifth grade world last year. … She’s kept me focused on things that are important to other people.

LDN: You made a point earlier to say that you have ALS, but it does not have you. Is that contributing?

Boggus: Well, you know I tell myself that every day. I have it, but it doesn’t have me. … I think that’s why Dr. Glass said “Don’t go home and be a patient.” Because you can continue to live your life. It will not be the same life, but you still can. People connections are important. Your abilities to get around will be different, but your spirit and your personality are not going to be changed by ALS. And Dr. Pat’s the same way. He will say, and he’s been a huge support as well. … None of us know when life is going to end, but when you’ve been given a diagnosis that there is no cure, and there is no medication for it, then I think you have to decide how you are. What your attitude is going to be for the rest of your life. And I think that’s an important step. It’s not going to heal you. It’s not going to change things, but you know you just need to live every day. Everybody should as if it’s their last day, and be grateful for it.

Kersey: And you see, she’s saying, you see a lot of people who, you know, they decide that maybe a tiny thing is bothering them, and they decide to be grumpy or upset. And then you see Mrs. Judy and Dr. Pat and the people who have ALS diseases. … Mrs. Judy is one of the happiest people I’ve ever met. … Every time I come over here she’s never upset. Never worries about when her life is going to end or what is wrong with her. She just always is happy, and I just think everyone should be like that because they’re fretting about things that are not even a big deal, and Mrs. Judy, she’s never upset, and she’s always happy, and her problems are big deals, but she doesn’t worry about them.

Boggus: Well said. From a little girl. And I think that’s her true insight.

If you would like to help fight ALS, it is possible to find donation and volunteer opportunities on the ALS Association website at http://www.alsa.org/fight-als/challenge.html.

Caroline Kersey, left, and Judy Boggus pose for a picture. Caroline started being a companion to Boggus, who was diagnosed with asmyotrophic lateral sclerosis, or ALS, two years ago.

http://lagrangenews.com/wp-content/uploads/sites/37/2016/08/web1_web0829KerseyBoggus-1.jpgCaroline Kersey, left, and Judy Boggus pose for a picture. Caroline started being a companion to Boggus, who was diagnosed with asmyotrophic lateral sclerosis, or ALS, two years ago.

By Alicia B. Hill | Special to the Daily News