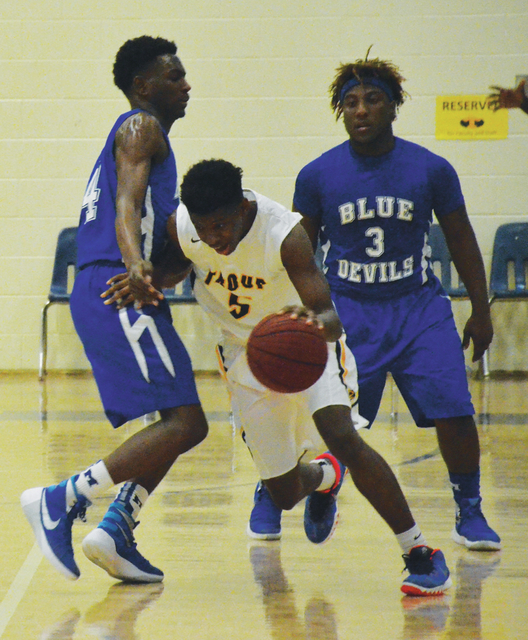 LAGRANGE – They’re a long way from satisfied, and there are a lot of goals they still want to achieve, but that doesn’t lessen the importance of Friday’s win for the Troup Tigers.

Coming off a close loss to Hardaway in the season opener, Troup made its home debut on Friday night, looking to even its record with a win over an improved Kendrick team.

The Tigers made it happen in dominant fashion.

The Tigers charged to a 24-0 halftime lead, and after they gave up a couple of long touchdown runs in the third quarter, they settled down and rolled to a 38-12 win.

“It’s big,” said senior Ken Truitt, who had a touchdown catch in Friday’s game. “We feel like it’s the first step in the right direction, to try to put Troup back on the map like we used to be.”

Troup started a bit slowly and was holding a 3-0 lead after the first quarter, but it scored three straight touchdowns in the second quarter to take a commanding lead.

It was a frantic pace in the third quarter, with the first three possessions resulting in touchdowns including two by Kendrick, but Troup ended up winning handily.

“To be my first home game as a senior, it’s very special to me,” said running back Camren Russell, who scored two touchdowns. “These guys came out with a bunch of intensity.”

Troup can now put together its first winning streak since early in the 2014 season with a home win over Bowdon on Friday.

“I think it gives us a little momentum, gives us a little shot in the arm,” Troup head coach Tanner Glisson said. “We would like to have that one from last week back. But you can’t do that. We’ll move on to Bowdon. They’ve got a lot of tradition. They were in the playoffs last year. So we’ve got to get ready to play.”

“Coming into the game, coach was telling us we can win, if we keep believing,” Crowe added. “We should have won the first game. This game, we believed the whole time. And I think we’re going to keep moving forward, get where we need to be.”

Against Kendrick, Troup’s big-play offense was on display throughout the night.

Freshman wide receiver Kobe Hudson, whose high-school career is off to a flying start, had two touchdown catches against Kendrick, giving him three in two games.

Crowe also threw a touchdown pass to senior Ken Truitt in the fourth quarter, and Russell did a lot of damage on the ground and scored two touchdowns.

Troup’s defense, outside of a couple of let-downs in the second half when Kendrick showed off some explosiveness of its own, got the job done, and the special-teams play led by kicker Carson Wreyford was exceptional.

Wreyford made a 29-yard field goal, he converted all four of his extra-point attempts, he put every kickoff into the end zone, denying Kendrick a chance to get something done in the return game, and he did a tremendous job in the punting department.

Glisson said the special-teams play was solid all the way around.

After Troup punted on its first possession, the defense forced Hardaway to go three-and-out.

A shanked punt gave the Tigers the ball at the Hawks’ 26-yard line.

After an 8-yard completion from Crowe to Truitt and a 17-yard run by Russell, Troup had the ball on the 1-yard line.

The Tigers were unable to punch it in from there, and Wreyford made a 29-yard field goal with 4:03 left in the first quarter.

In the second quarter, Troup’s King Mwikuta recovered a fumble, giving his team the ball at the Kendrick 26-yard line.

Troup’s second touchdown was set up by another Kendrick fumble, this one at its own 23-yard line.

Kendrick decided to go for it on fourth down in its own territory on the ensuing possession, and that move backfired.

After the failed fourth-down play, Crowe found a wide-open Hudson in the end zone for a 37-yard touchdown, and Troup had a 24-0 lead.

The start of the second half saw three touchdowns scored in less than four minutes.

Kendrick had touchdown runs of 52 and 77 yards, and Crowe connected with Hudson for a 45-yard scoring pass.

Trailing 31-12, it looked like Kendrick had scored another touchdown late in the third quarter, but the play was called back because of a penalty.

Troup capped the scoring with a fourth-quarter touchdown.

Crowe threw the ball to Truitt, who despite having a Kendrick player draped all over him, managed to make the catch in the end zone, and Troup led 38-12 with 3:31 remaining.

The Kendrick player was called for pass interference on the play, but Truitt never lost sight of the ball and made the play.

The Tigers enjoyed the moment on Friday, and there was a large and appreciative group of home fans on hand to savor the moment with them, but Truitt said the players and coaches are committed to improving each game, and each day.

LaGrange goes back on road looking for two straight