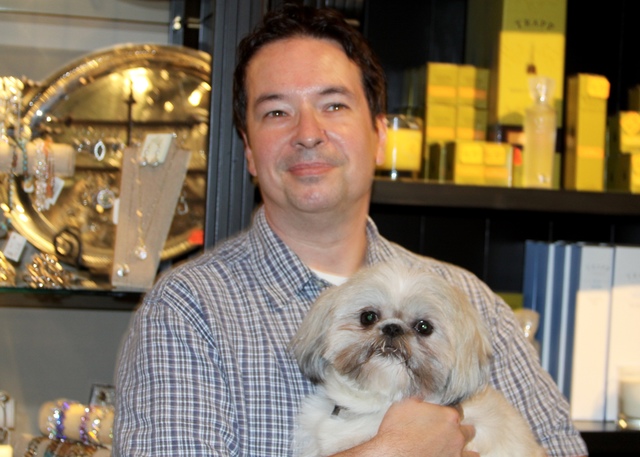 LaGRANGE — Walking into Tournesol in downtown LaGrange, you are greeted by a wide array of china and decorative pieces as well as the curious face of a shih tzu named Napoleon, who the owner claims is almost more popular than the shop itself.

“Because of our location here downtown, we meet lots of new, out-of-town people,” said Jeff Wright, the manager at Tournesol. “In fact, we’re the first contact a lot of people have. When they come, they come and park downtown, and they look at the square then they start looking at the shops. So, a lot of times we’re their first interaction with LaGrange, which is kind of interesting because you meet people from all over.”

The store, which sells brands ranging from Lenox to Kate Spade, almost went in an entirely different direction when it got started.

“We actually had a business before called Serendipity 10 years ago, and we had closed that and moved to Florida,” Wright said. “About 2009 we moved back to LaGrange, and we were looking at opening a garden themed gift shop. Right about the time we were planning to open, Hill Street House decided to close … so we just took the opportunity to go in a different direction and do the china and crystal.”

The Serendipity that Wright referred to was located in the old Mansour’s building, but the new location and new direction seems to be working for the store.

“A lot of people ask what the store name means,” said Wright. “It’s actually the French word for sunflower. It translates ‘follow the sun’ or ‘turn to the sun,’ which the French use for sunflower, so since we were in downtown LaGrange, we thought we’d have a kind of French theme, since LaGrange and Lafayette.”

For Wright, the people are what make the job important.

“It goes back to meeting the people, and you see people, old friends and just all the involvement opportunities. We’re involved in supporting the symphony and the humane society and things like that. You just get a lot of opportunities to be involved and interact with the community.”

Tournesol is located on Main Street in downtown LaGrange.

Tournesol’s manager, Jeff Wright, poses for a picture with Napoleon, the shop’s most popular staff member.

http://lagrangenews.com/wp-content/uploads/sites/37/2016/08/web1_IMG_2622-1.jpgTournesol’s manager, Jeff Wright, poses for a picture with Napoleon, the shop’s most popular staff member.