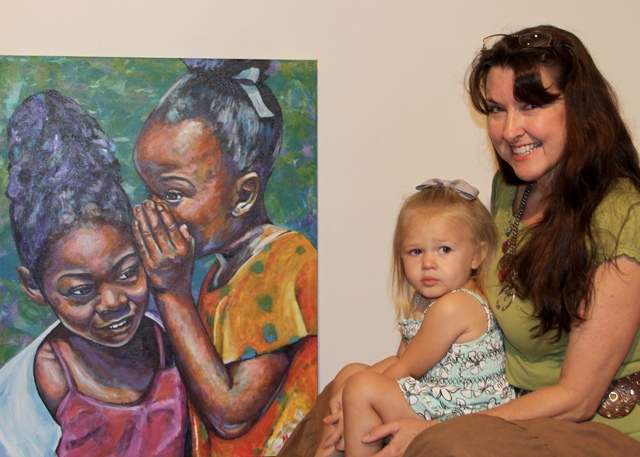 LaGRANGE — Paintings and photographs line the halls of the LaGrange Art Museum this week as the Visual Artists Alliance of LaGrange prepares for its sixth annual show, scheduled to open on Friday, Sept. 2.

This year’s featured artist will be Austin Wieland.

Wieland is a professor of ceramics at LaGrange College who has a background in engineering. His kinetic ceramic sculptures appear to be made of various materials from a distance, but his pieces are fully ceramic with the exception of a select few electronic parts, like LED lights, micro controllers and wiring.

“One of the things I try to convey in my pieces is this sort of assumption people have with clay and ceramics as a material,” said Wieland. “Most people when they hear the word clay or ceramics, their mind goes to functional pottery or some kind of kitschy object that you might find in your grandma’s house in her china cabinet or something like that. And there is this whole industrial side to ceramics that people don’t really see on the day to day basis.

“It’s a very high-tech material. It’s used on panels for the space shuttle. … I try to draw attention to both sides of the industry by sort of juxtaposing this distressed metallic surface with this sort of kitschy patterned surface. A lot of them, they have sort of a narrative within them, so a lot of them are about my own interactions with technology.”

Wieland’s work will be displayed on the second floor of the museum. The first floor will be dedicated to the work of various artist from VAAL.

“We’ve got about 45 different artists,” said Thea McElvy, president of VAAL. “I think we’ve got about 25 or 28 showing. There are over 70 pieces, and we are going to have 11 cash prize awards. … Most of (the art) is for sale. … The awesome thing about this show is there is a little bit of everything. There’s whimsy. There’s natural beauty. There’s intriguing abstracts. So, we’ve got all of that.”

VAAL has been around for nine years and helps local artists find places to show their art, market and find artistic growth. The show will feature works ranging from paintings to sculpture to photography to yarn art, including works of notable local artists such a Ray Stewart and Keith Parmer.

“It’s nice for the community to see the creativity that goes on in this little tiny town for it being so small,” said Gail Grove, an artist who will have three pieces featured in the show.

Last year, about 300 people attended the opening, a record for the museum. Organizers are hoping for a similar turnout for this year’s show.

“It’s one of our favorites,” said Karen Anne Briggs, executive director of LaGrange Art Museum. “We love having a lot of people come.”

The museum is loaning its building to VAAL for the show as a way to support the local art community. The museum regularly works closely with local artists, using them as teachers for art classes and allowing VAAL artists to work in one of its buildings.

“We want to thank the LaGrange Art Museum because they are always super and supportive, and support us,” said McElvy. “We so appreciate the space and the opportunity. This is something, we have people join just because of this show because they love this show.”

The VAAL opening exhibition will be Friday, Sept. 2, at 7 p.m. The show will be at the museum through Sept. 30. More information about VAAL is available at http://vaalart.com.