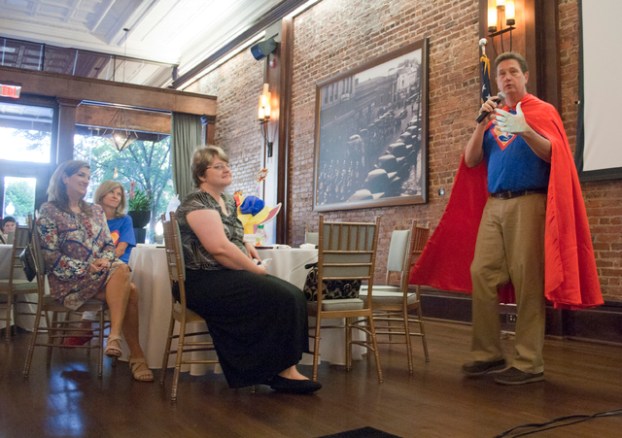 LaGRANGE — A local nonprofit that collects and distributes charity dollars to more than 20 local agencies kicked off its annual fundraising drive Tuesday morning.

The United Way of West Georgia’s superhero-themed campaign aims to raise $1 million before March, and the money will benefit local organizations ranging from the American Red Cross to Consumer Credit Counseling, according to organizers.

“I am thrilled to see the crowd here today,” local United Way director Patti Youngblood said to a packed house at Del’Avant event space downtown. “Over 21,000 people were served by the United Way last year, and the power of that is amazing. I want you to know how powerful your gift to the United Way is.”

Hollis Hand Elementary School principal Jack Morman, this year’s fundraising chairman, was in the spirit Tuesday morning. He sported a superhero-style costume while speaking to the crowd and imploring them to open their hearts — and wallets — to what he called a good cause.

Morman balled-up his fist as imagery while speaking to the crowd. He explained that superheros, while fighting crime, often use their fists. He also noted the fist is an often negative symbol across many cultures, and said, “If we hold it so tight that nothing gets out, we can’t receive anything.”

He’s hoping that people will give generously to receive generously in the community, but he knows what a challenging task raising $1 million may be.

“It’s a daunting goal, a daunting task,” Morman said. “I’ll be honest, I’ve had a few sleepless nights about it — but, it’s not about the number, it’s about the people in need.”

On Sept. 8, the United Way of West Georgia will host its fundraising coordinator training beginning at 8:30 a.m. at IHOP on Lafayette Parkway. It’s an opportunity for local businesses, churches and other groups to send a representative to learn about how to raise donations for United Way and its partner agencies. The training will last about an hour and a half and participants will receive a free T-shirt. Breakfast is included. Interested parties should RSVP by calling the United Way of West Georgia at 706-884-8292.

Donors to the United Way can specify the agency they’d like their donation to go to, according to their website at www.unitedwaywga.org.

There are approximately 1,400 United Way offices across the country, and each is independently incorporated and led by local staff and volunteers. The scope of each United Way office’s work is determined on a local level.

LaGRANGE — This week, we interviewed Judy Boggus, a LaGrange native who was diagnosed with ALS — amyotrophic lateral sclerosis... read more