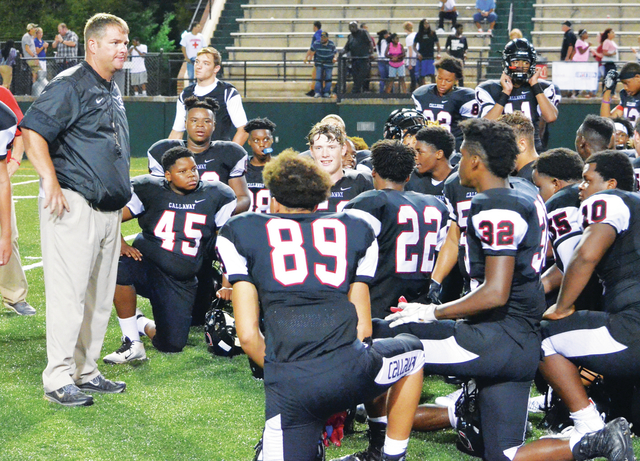 HOGANSVILLE – The Callaway Cavaliers, coming off an impressive 42-28 road win over Handley (Ala.), are holding down the fourth spot in this week’s Class AA Associated Press poll.

Fitzgerald is ranked first, and Benedictine, Vidalia, Callaway and Jefferson County round out the top five.

Heard County is in Region 5-AA along with Callaway, and those teams will meet on Oct. 13 at Callaway Stadium.

Defending state-champion Cartersville, which shares a region with LaGrange and Troup, continues to be the top-ranked team in Class AAAA, and it received all 16 first-place votes.

Callaway began its season with a 37-6 win over LaGrange, and it went on the road last week to take on a strong Handley team.

Callaway found itself trailing 21-6 in the first half, but it dominated the rest of the game to improve to 2-0.

Callaway is off this week, and it will return to the field on Sept. 8 with a game at Columbus High.

“We’ve had three physical games, our scrimmage game with Northside-Columbus and then LaGrange last week, and then (Friday) night with Handley,” Wigging said. “I can’t ask for much more out of the young men.”

In the LaGrange game, Callaway built a 30-0 lead in the second half in a game that didn’t have a whole lot of suspense.

Things were a lot different last week against Handley.

Handley had the lead in the fourth quarter, but Callaway scored three consecutive touchdowns to end the game and win going away.

“It was a hard-fought ballgame, and that’s what you want to be a part of,” Wiggins said. “A lot of big-time hits, and a lot of good players that work hard to get to that Friday night. To come out on top, it was a really special night for our coaching staff, and our kids and our community.”

While Callaway’s offense had a big night, putting six touchdowns on the board, the defense did its job as well.

After Handley went up 21-6 in the second quarter, it didn’t score any more points on offense, although it did return a fumble for a touchdown in the fourth quarter.

Junior defensive lineman Jonathan Leonard had a big night with 13 tackles, and Qua Hines and Courtney Williams each had an interception.

On the offensive side, Dylan Johnson and Braylon Sanders did a lot of the damage.

Sanders had a 73-yard touchdown catch from Johnson, he threw a scoring pass to Johnson on a trick play, and Johnson added a touchdown run.

Fullback Jibrell Jackson had two scoring runs, and Cartavious Bigsby had a long touchdown run in the fourth quarter that put the game on ice.

When Callaway returns from its off week, it will play Columbus, Upson-Lee and Harris County in consecutive weeks before taking another week off.

Callaway then begins its five-game region schedule on Oct. 7 at Lamar County.

After hosting Heard County on Oct. 13, Callaway finishes the regular season against Temple, Spencer and Jordan.