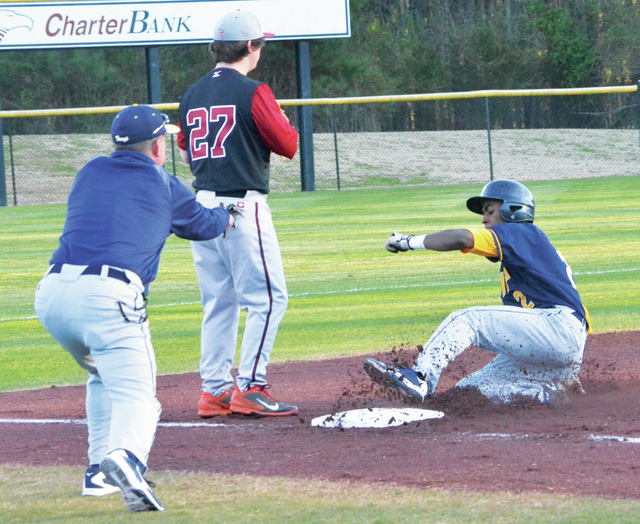 LAGRANGE – It was a helpless feeling for the Troup High batters.

Facing Central-Carroll ace Emily Williams on Tuesday in a Region 5-AAAA softball game, Troup not only didn’t manage a hit, but it didn’t even put a ball in play.

Williams, in a remarkable display of power pitching, faced 22 batters, and she struck them all out to lead her team to a 7-0 victory.

Only a wild pitch on a third strike in the fourth inning kept Williams from throwing a perfect game.

“I’ve never been a part of that before,” Troup coach Mason Brackett said. “Like I told the girls, we were on the wrong side of history.”

While Williams threw the occasional off-speed pitch, she was mostly getting it done with a fast ball that Troup’s hitters couldn’t connect with.

“We just didn’t make adjustments,” Brackett said. “We had some better cuts the second half of the game, we just didn’t adjust.”

Troup’s Lauren Brooks did a solid job herself on the mound, but some defensive miscues led to a handful of unearned runs.

“We had four unearned runs,” Brackett said. “When a pitcher’s on like she is, you can’t do that. Just one run will beat you.”

Troup had won seven of eight games to improve to 7-3, but it has dropped its past three games to fall to 7-6 overall, and 1-4 in the region.

Troup will begin the second half of its region schedule next week.

Troup will host Chapel Hill on Sept. 6 and Sandy Creek on Sept. 8 as it looks to begin climbing the ladder in the region.

Life in the region is no picnic, with Central-Carroll, Cedartown and Chapel Hill all featuring pitchers who will likely be pitching on the college level down the road.

Troup has lost to each of those teams the first time through the region schedule, and it also fell to LaGrange.

“The top teams all have Division I pitchers,” Brackett said. “It makes it tough.”

Troup had some offensive success in a loss to Cedartown last week, but it couldn’t do anything against Central.

“We played pretty well against Cedartown before this,” Brackett said. “(Williams is) a great pitcher, but still, you’ve got to be able to make some adjustments, and do what you can do on defense.”

Central scored two runs on one hit in the top of the first inning to take the early lead, and it remained a 2-0 game until the fifth inning when Williams helped herself with a two-run single to push the lead to 4-0.

Troup catcher Maddie Weathers helped keep the deficit at four by throwing a potential base-stealer out at second.

Faith Bennett had an RBI single during the sixth inning, and Logan North had a run-scoring hit during a two-run seventh inning.

Troup had its only base runner in the bottom of the fourth.

With one out, Abby Taylor swung and missed for strike three, but the ball got away from the catcher, and she reached first safely.

It was only a two-run game at that point, so Troup had the tying run at base, but Williams struck out the next two batters to keep it a 2-0 game.