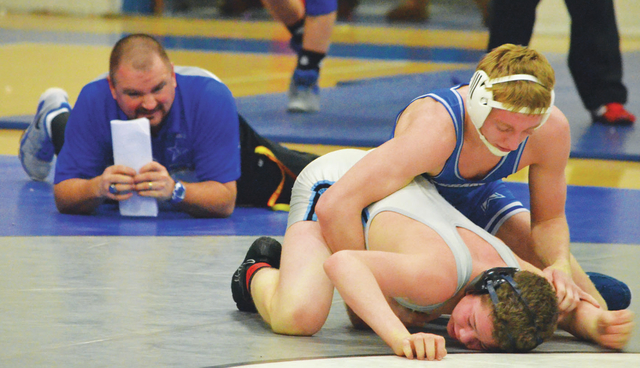 LAGRANGE – It was a rough night for the LaGrange Grangers.

In a 38-6 season-opening loss to the Callaway Cavaliers, the Grangers struggled in all areas of the game, and that included defense.

The LaGrange defense was short-handed, and poor field position throughout the game didn’t help.

Regardless, it wasn’t the sort of effort LaGrange’s defense was hoping for in the first game of the season.

Heading into last week’s game against Villa Rica, LaGrange’s defense was looking for a bounce-back performance, and the players on that side of the ball produced in a big way.

LaGrange even scored a touchdown on defense, with senior Jalen Wilson returning an interception for a score.

It was a complete performance for a defense that avoided the breakdowns it suffered in the loss to Callaway, which included a couple of blown coverages that resulted in long scoring passes.

“We wanted to out-hit them on the field. That’s the thing we kind of emphasized during the week,” LaGrange defensive coordinator Marvin Kendricks said. “We’ve got to tackle well, and we can’t blow coverage.”

Villa Rica had been an effective running team in a preseason game as well as a regular-season win over Central-Carroll, but it had less than 100 yards on the ground against LaGrange.

“We kind of dominated up front,” Kendricks said. “Coming in, we knew out of the two games we broke down with them, they threw the ball five times. So we knew that they were going to come in and run. They run a Wing T, and predominantly focus on the run. We kind of took away the stuff they like to do.”

When Villa Rica did try to throw the ball, it had no success.

One of those pass attempts proved disastrous for Villa Rica when Wilson intercepted the ball and went 25 yards for the touchdown.

“We were in cover two,” Wilson said. “I saw the quarterback scrambling, and I read him. I read the play.”

Kendricks said Wilson “performed at a high level” throughout the game.

“He caught an interception, and took to the house for a pick six,” Kendricks siad. “Any passes that they threw, he was around the ball. He’s been around the ball the last couple of weeks. I’m really excited about him, and his ball skills in the secondary.”

“Rico Dunn just brings a different type of energy,” Kendricks said. “Everybody feeds off of it. That’s really what we’ve been missing.”

“He’s having a great start,” Kendricks said. “He’s got a high energy, a high motor. He’s a guy that can make some big plays, and put is in a good situation.”

Kendricks believes the defense will continue to improve, especially when senior James Clark returns from an injury.

“We haven’t seen our best defense yet,” Kendricks said. “I told the guys, be happy, celebrate, but be ready to come back to work. But they did great. I’m proud of those guys. We had a good week of practice, coming off a loss.”