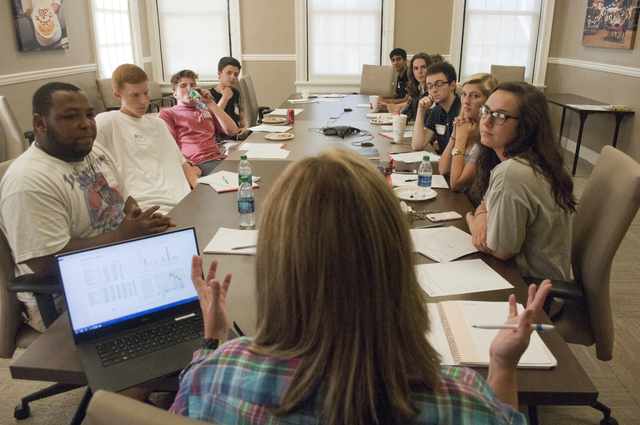 LaGRANGE — The second LaGrange Youth Council met for its first meeting of the new school year Tuesday at City Hall.

More than a dozen juniors and seniors from area schools are participating in the group, which was established last year by the city to engage young people and allow them to give input to local officials, said Meg Kelsey, city manager.

Last year, the first Youth Council established bylaws, a mission statement and even organized events for local youth. This year, Kelsey said she’s hoping to take the group to the next level and organize more events and captivate the attention of more young people.

After an ice-breaker exercise aimed at getting students to know one another, the new class learned about the organization, functions and services of city government. Kelsey told the teens about the city’s utilities operations, public safety efforts, economic development goals and future plans. The teens were particularly interested in retail development, like the new Great Wolf Lodge water park planned off Whitesville Road near Interstate 85.

Karan Lakhwani, a 17-year-old senior at LaGrange High School, is in his first year on the Youth Council. He joined the group because he’d like to see positive changes in retail and restaurants in LaGrange, he said.

“I’ve lived here all my life, so just looking around town you see opportunities for things like commercial development, like she (Kelsey) mentioned, and in restaurants,” Lakhwani said. “The town is full of stuff that can be improved.”

The teen, who’d like to study aerospace engineering at Georgia Tech, said his parents own a business in the LaGrange Mall, and he thinks having a few more restaurants there could help his parent’s business.

“I hope to be able to influence some of the decisions made in the city, especially towards the ideas I’ve mentioned,” he said.

Another thing he’d like to see? A Target store, he added.

Although the Youth Council has room for 24 students, only about 13 signed up this year, Kelsey said. She’s not discouraged, though, and hopes as word gets out, the program will grow every year.

To be eligible, students must be high school juniors or seniors, be a resident of LaGrange, and have grades good enough to participate in student athletics. The city has reached out to school guidance counselors, who in turn work with teachers to recruit students to the Youth Council, Kelsey said.

LaGrange City Manager Meg Kelsey, center, meets with Youth Council members on Monday at City Hall. Thirteen area teens are involved in the program, in its second year, which is aimed at allowing more youth input into the city’s affairs.

http://lagrangenews.com/wp-content/uploads/sites/37/2016/08/web1_YouthCouncil01WEB-1.jpgLaGrange City Manager Meg Kelsey, center, meets with Youth Council members on Monday at City Hall. Thirteen area teens are involved in the program, in its second year, which is aimed at allowing more youth input into the city’s affairs.