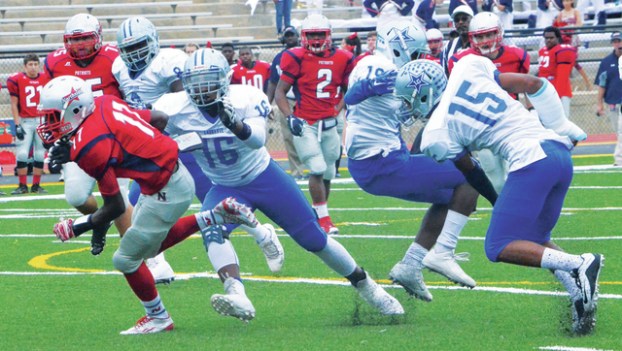 LAGRANGE – It’ll be a clash of two storied programs.

The Griffin Bears, who won a state championship in 2014, will host the LaGrange Grangers in a matchup of two of the state’s elite programs.

Both teams will be looking to build on wins from last week.

Griffin opened its season with a wild 53-50 victory over Spalding County, while LaGrange evened its record at 1-1 with a 28-7 road win over Villa Rica.

“We got the monkey off our back a little bit,” said LaGrange head coach Dialleo Burks, whose team lost to Callaway 38-6 in the season opener. “We needed that one. We needed it. Now, we get to really focus on the next step.”

The next step is a big one.

Griffin, under the direction of new head coach Antonio Andrews, delivered an explosive offensive performance last week, accumulating 543 yards in a win over its county rival.

While Griffin had a tough night on defense, it did do a better job in the second half when it limited Spalding County to 14 points.

Griffin is always a formidable opponent, and Burks knew that when he was approached by former head coach Jarret Laws about playing the game.

“Coach Laws was the one who called and wanted to know if we wanted to play,” Burks said. “I didn’t hesitate. We’ve got the opening (in the schedule), let’s go. I believe we had guys coming back that would go in and compete. We just have to go play ball. We have to be focused. It’s the same as last week. We can’t make mistakes, and we just have to have fun and give our best, and we’ll see where the chips fall. We’ll see. We’re excited. We’re ready.”

LaGrange is feeling a lot better about things coming off a win.

Little went right in the season-opening loss to Callaway, but Burks didn’t feel his team was over-matched physically, it was just a matter of cleaning up some mistakes.

LaGrange mostly did that against Villa Rica.

The Grangers cut way down on the penalties, they were considerably better on special teams, they were much sharper on defense, and outside of a fumble that was returned for a touchdown in the second half, they held onto the ball.

“That was the difference in the game,” Burks said. “You can’t make mistakes where you just give it to them. Make them earn it.”

Senior quarterback Amad Ogletree had more than 200 combined yards of offense, and he had a scoring run as well as a touchdown pass.

Sophomore Jamari Trash had a scoring catch, and Bo Russell had a handful of big catches, including one that set up the clinching touchdown in the fourth quarter.

In the second half, Villa Rica returned a fumble for a touchdown to get within 14, but LaGrange came right back with a touchdown in the fourth quarter to put the game away.

Ogletree had the fumble that led to the touchdown, but Burks said he didn’t let it bother him.

On the ensuing series, Ogletree and Russell hooked up for a long completion, setting up a short touchdown run by Cornell Kendrick.

“What was big for me was when he fumbled, he got up, and he came over to the sideline and said coach I’m OK,” Burks said.

Everything had been going well to that point, so Burks said the players weren’t discouraged after giving up the touchdown.

“The flow of the game was going very well,” Burks said. “A lot of things were going in our favor. we had a big goal-line stand. We had a lot of positives in the game. We were winning the battle up front. So it was easy to bounce back.”

“They only had 118 yards of total offense, so that’s really good for the defense,” Burks said.

Perhaps the biggest moment for the defense came late in the first half when Villa Rica was stuffed at the goal line, allowing LaGrange to take a 21-0 lead to the break.

Also in the first half, Jalen Wilson returned an interception for a touchdown.

“It was exciting to see our guys stand up like that,” Burks said. “We had a pick six, we had a big goal-line stand right before halftime and gained some momentum.”

In the special-teams department, Austin Stamper made four extra points, and Matt Rainey and Marat Rosencrants handled the punting duties.

“We still have a ways to go, but it was a good win,” Burks said.

Quarterback Amad Ogletree, left, had a touchdown run and a touchdown pass last week against Villa Rick, and Cornell Kendrick had a scoring run, his second of the season. Kevin Eckleberry | Daily News

http://lagrangenews.com/wp-content/uploads/sites/37/2016/09/web1_LHS5.jpgQuarterback Amad Ogletree, left, had a touchdown run and a touchdown pass last week against Villa Rick, and Cornell Kendrick had a scoring run, his second of the season. Kevin Eckleberry | Daily News