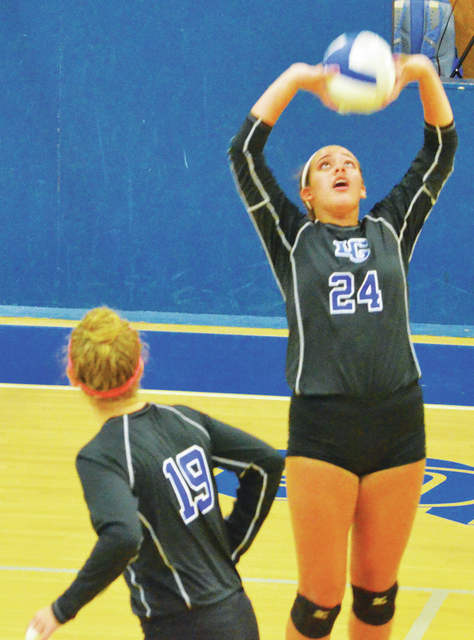 LAGRANGE – It wasn’t a perfect night.

The LaGrange High volleyball team made its share of mistakes during Thursday’s home match against Beulah (Ala.)

The Lady Grangers did a fine job of shrugging off those miscues, though, and that’s a big reason why they were able to win in straight sets.

Caitlin Morman, one of three seniors on the team, said it’s critical to not let one mistake turn into another.

“As soon as you mess up, you’ve got to be over it quick,” Morman said. “Otherwise it stays in your head and messes your game up.”

LaGrange is still relatively early in its season, although it did have a busy week with five matches.

Morman said a key to the team’s early-season success is the way the players all support each other.

“We already were pretty close when the season started,” Morman said. “As the season goes on, we get closer and closer. Attitude is everything in this game. If you get mad at each other, you have problems real quick.”

LaGrange head coach Angie Newton was pleased to see her team get the win on Thursday, although she said there is still room for improvement.

“They did pretty good,” Newton said. “We do have to do better on our serves, and we’ve got to play better defense.”

In the first set, there wasn’t much suspense, with LaGrange rolling to the easy win.

The second set was a lot tighter.

LaGrange was down by two points when senior Aleea Barreras had a kill and a service winner to tie it at 11-11, but Beulah hung tough and had a 17-15 lead later in the set.

Madison Lewis had a service winner to give the Lady Grangers a 19-18 lead, and they started to pull away.

Following a lengthy rally, Emery Davenport had a kill to push the lead to 24-20, and Morman followed with a kill of her own to clinch the set.

In the third and final set, Beulah started quickly and had a 4-1 lead, but LaGrange rallied.

A service winner by Barreras tied it at 4-4, and after Beulah scored a point, Morman’s kill deadlocked the score again.

The set remained close for a while, and it was tied 11-11 when Lewis had a kill to give LaGrange a lead it wouldn’t relinquish.

With Barreras serving, LaGrange scored four straight points to take a 16-11 lead, a run that was highlighted by a Chloe Beall kill.

Cameron Jones had a block to give LaGrange a 19-13 lead, and it went on to lead by as many as eight points before Beulah made one final charge.

Beulah scored three straight points to get within five, but Lewis halted that run with a kill, and LaGrange led 22-16.

Beulah won the next point to get within five, but LaGrange finished the match on a 3-0 run.

After a Barreras kill and a Jones service winner, Lewis finished the match off in style with a kill.

LaGrange is off until Thursday when it goes on the road to face Auburn (Ala.).

OF NOTE: For more photos from Thursday’s match, check out facebook.com/LDNsports