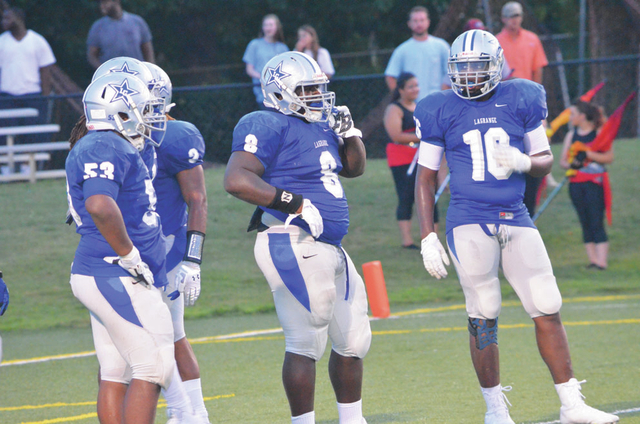 GRIFFIN – It was one of those nights.

Coming off a big road win over Villa Rica the previous week, LaGrange High was hoping to make it two in a row with a victory over Griffin on Friday night.

Instead, it was a strong Griffin team dominating the game in every possible way on the way to a 51-0 home win.

Griffin scored on six of its first seven possessions.

The only time Griffin didn’t score during that stretch came when Cordarius Grisom made a nice interception in the end zone.

It was a 38-0 game at the half, and Griffin continued to control things in the second half on the way to the shutout win.

LaGrange had precious few scoring chances in the game.

On LaGrange’s fifth possession, sophomore quarterback Nathan Cronic came into the game and completed a 49-yard pass to Jamari Thrash that put the ball in Griffin territory.

On fourth-and-one, LaGrange went for it, but Griffin made the stop at its own 26-yard line.

That’s the closest LaGrange came to the Griffin end zone for the remainder of the game.

In the second half, LaGrange twice made it into Griffin territory.

On its second possession of the second half, LaGrange moved to the Griffin side of the field following a pass interference penalty.

That drive ended with a failed fourth-and-10 play from the Griffin 46-yard line.

Then on its final possession of the game, LaGrange made it to the Griffin 47-yard line before the clock hit zero.

LaGrange managed just four downs in the game, including one in the first half of Thrash’s catch.

LaGrange was limited to 105 total yards, and it managed 58 yards on 23 rush attempts.

LaGrange will host East Coweta on Friday, and following a week off, it begins its Region 5-AAAA schedule at Central-Carroll.

LaGrange’s Cordarius Grissom comes up with an interception during the first half of Friday’s loss to Griffin. Photo by Dallas Sullivan

http://lagrangenews.com/wp-content/uploads/sites/37/2016/09/web1_LHS1.jpgLaGrange’s Cordarius Grissom comes up with an interception during the first half of Friday’s loss to Griffin. Photo by Dallas Sullivan