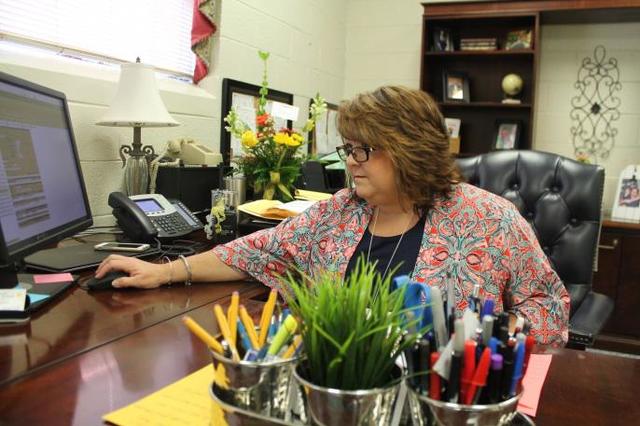 LaGRANGE —Rosemont Elementary School’s new principal, Christina Grace, is no stranger to the school system, but her journey didn’t start in that direction.

Growing up in a small town in Alabama, football was the highlight of this former band majorette’s high school days. They took football seriously.

Naturally, the football pride transferred to her days as an Auburn Tiger where Grace went to pursue a degree in pharmacy. While her allegiance to the sport didn’t waver, her devotion to pharmacy eventually did.

“When I got ready to go to pharmacy school – the professional component of it – I had a little break so I substituted in a kindergarten classroom, and I fell in love,” said Grace.

She soon told her husband and family that she was changing her major, even though she had a pharmacy job awaiting her after she completed school.

“Even though I changed my major, I have not ever regretted it,” she said. “… Seeing these kids bright faces everyday makes me a better person.”

After college, when her husband was offered a job in Opelika, Alabama, she knew Troup County would be a great place to work and live.

As a mother of two young children at the time, Grace recalls, “I started making phone calls to Troup County and was scheduled for interviews at both Rosemont and Berta Weathersbee (elementary schools). I could have started out here (at Rosemont) but Berta called first and I took it.”

Since her beginnings as a pre-K teacher at Berta Weathersbee, Grace has walked the halls at Long Cane Middle School, Callaway Elementary School and now at Rosemont. While she knows middle school students need attention, she believes what they really look for is someone to listen to them.

“You have to let them know you’re listening,” she said. “They are dealing with more social issues. For the younger kids, I smile every day. My younger students are pleasers and they want the adults in their life to be proud of them. They want to learn.”

The difference, and a little bit of a secret she says, is when you peel back the layers of a middle school student, they want to learn, too.

During her 21-year career with Troup County School System, Grace said leadership was not in her initial plan. When she began teaching in middle school, she learned new skills, like scheduling and curriculum planning. When she stepped into leadership roles, she also saw a greater impact through the number of students and teachers she encountered.

As the new leader at Rosemont, she sees great things in the future.

“I’m amazed, daily, at the support from the community and the teachers,” Grace said. “My job here will be to take the accomplishments that Rosemont has already achieved and sustain them, maintain them and take it to the next level.”

One of those next level items she and her staff have already implemented is a Lego wall for students. When she mentioned her vision, the staff quickly created the start of a maker space and the school counselor supplied two bins of Legos.

She envisions the space being used when students need a brain break or additional motivation to complete assignments.

Christina Grace has been married to her husband, Scotty, for 28 years. They have two children.

Christina Grace, who has worked 21 years in the Troup County School System, became the principal of Rosemont Elementary School this year.

http://lagrangenews.com/wp-content/uploads/sites/37/2016/09/web1_web0905ChristinaGrace.jpgChristina Grace, who has worked 21 years in the Troup County School System, became the principal of Rosemont Elementary School this year.

Hogansville officer, 3 others injured in wreck on I-85