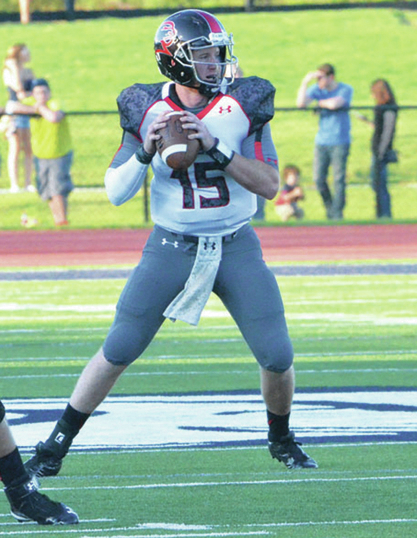 Facing Birmingham-Southern in its season opener on Saturday, LaGrange College rolled to a 28-7 halftime lead, and it maintained control in the second half on the way to a 47-27 victory.

LaGrange College had more than 500 yards of offense, and the defense limited Birmingham-Southern to less than 100 yards in the decisive first half.

It was an impressive performance by a veteran LaGrange College team that entered the season with high expectations.

“We play fast with quick drives and I thought we had good drives tonight,” LaGrange College head coach Matt Mumme said. “Defensively I thought we did a tremendous job of getting them off the field in the first half. We talked about it all week about getting a fast start on defense and get them off the field. On offense, we wanted to get a fast start to get out in front of this thing and not give them hope.”

Junior quarterback Connor Blair, who is in his second season as the starter, looked right at home running Mumme’s offense.

Blair completed 28-of-39 passes for 384 yards, and he had four touchdowns and no interceptions.

As is typical of Mumme’s offense, a lot of different receivers were involved, with 12 different players making at least one catch.

Lavelle Meeks led the way with four catches for 136 yards with two touchdowns, and Marsalis Jackson and Quentin Dixon each had four catches as well.

Ervens Oge and running back Jamarkis Holmes each had two catches with a touchdown.

LaGrange College got it done on the ground as well, accumulating 155 rushing yards on 27 attempts.

Holmes had seven carries for 47 yards, an average of 6.7 yards per carry, Nicholas Searcy had 39 yards on seven attempts with a touchdown, and Drew Lewiski had a scoring run.

Defensive back Brandon Penn highlighted the defensive effort with a team-high 11 tackles, and linebacker Khary Paige had nine tackles.

LaGrange College had six tackles for loss, and that included a sack by defensive lineman Demetrius Rodgers.

The Panthers punted on their first two possessions, but once they started scoring, they didn’t stop.

With 6:47 left in the first quarter, Blair threw a 50-yard touchdown pass to Meeks, and Zachary Kudwa made the first of his six extra points.

Later in the first quarter, the Panthers went 62 yards on five plays, and Holmes capped that drive with a 20-yard touchdown catch from Blair.

After Birmingham-Southern scored a touchdown to get within seven, LaGrange College scored twice in the second quarter to take a 21-point lead.

Birmingham-Southern found the end zone three times in the second half, but it was unable to make up any ground since LaGrange College continued to score at will.

Three times Birmingham-Southern scored a second-half touchdown to get within two scores, but LaGrange College kept extending the lead.

After Birmingham-Southern’s first touchdown in the second half, LaGrange College went 72 yards in seven plays, and Oge caught a 4-yard scoring pass from Blair.

In the fourth quarter, a nine-play, 75-yard drive ended with Searcy scoring on a 7-yard run.

After Birmingham-Southern notched its final touchdown to get within 14, Button took the ensuing kickoff and raced 94 yards to put the game on ice.

LaGrange College will play its home opener on Saturday when it takes on Berry College at 7 p.m.