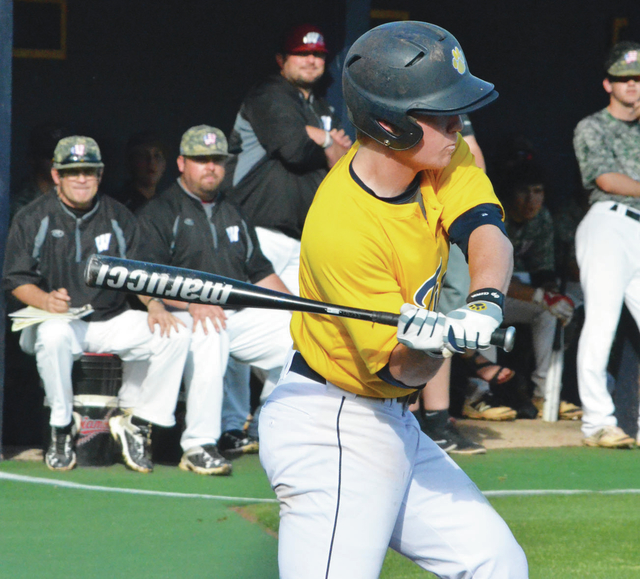 LAGRANGE – They had no doubts.

When the defense made a critical stop on fourth down, Troup got the ball with a few minutes remaining with an opportunity to score a touchdown and take the lead in Friday’s home game against Bowdon.

“We knew we were going to put it in,” said senior Jack Schweizer. “We had complete confidence.”

That confidence was not misplaced.

The Tigers went 67 yards in six plays, with Montez Crowe finding Ken Truitt for a 30-yard touchdown pass to deadlock the score at 27-27.

Carson Wreyford then knocked through the extra point to give Troup the lead.

After one final defensive stand, Troup had a come-from-behind 28-27 win before an appreciative home crowd at Callaway Stadium.

Troup, which beat Kendrick 38-12 the previous week, improved to 2-1 while putting together its first winning streak since the first two games of the 2014 season.

Senior running back Camren Russell continued to produce in a big way with 94 yards on 17 carries with two touchdowns.

Crowe completed 7-of-16 passes for 179 yards with two touchdowns, and he also ran for 49 yards on nine attempts.

Four Troup players caught at least one pass, including Macenta Stafford, who had three catches for 46 yards, and freshman Kobe Hudson had two catches with a touchdown.

On defense, Kevin Martin had eight solo tackles and 12 assists, and he made the tackle on fourth down that clinched the victory with less than a minute remaining.

“We’re still making a lot of mistakes because of our youth, but the kids are having fun, they’re flying around, and they’re believing in the coaches,” Troup head coach Tanner Glisson said. “And that’s half the battle.”

Troup appeared to be in trouble in the fourth quarter.

Bowdon’s offense, which had been mostly unstoppable in the game, scored a touchdown to put Troup in a 27-14 hole with 8:40 to play.

At that point, Bowdon had scored three consecutive touchdowns, and Troup’s defense appeared to have no solutions.

Bowdon’s final two possessions both ended with failed fourth-down plays, though, as Troup’s youthful defense came through when it had to.

“They had us on our heels,” Glisson said. “And we didn’t really have an answer, and we were trying to fix some things. When you have a young defense, it’s hard to fix things in the course of a game. So that was tough. But we knew we’d keep battling. That’s what we told them, just keep battling, and let us fix it. Make the small adjustments we’re asking you to make, and they did. And they showed up, and it’s a great win.”

Troup’s offense did its part as well.

In the third and fourth quarters, Troup scored touchdowns on three consecutive possessions to put enough points on the board to outlast a talented Bowdon squad.

Truitt, who had what turned out to be the game-winning touchdown catch, said the outcome “shows that we can keep fighting in a game, and we won’t give up.”

Troup started quickly, going 61 yards in three plays for the touchdown less than a minute into the game.

Crowe hit Hudson for a 13-yard completion on first down, and Crowe then had an 11-yard run to the Bowdon 38-yard line.

On the next play, Russell took a handoff, and he beat the Bowdon defense for a 38-yard touchdown, and Wreyford made the first of his four extra point to give Troup a 7-0 lead.

Troup didn’t score again, though, until late in the third quarter when it was behind 20-7.

By that point of the game, Bowdon had seemingly seized control, with its offense chewing up huge chunks of yardage, while the defense hadn’t allowed a point since that opening drive.

Troup was a long way from done, though.

On its second possession of the second half, Bowdon had a 63-yard touchdown drive, and it was ahead 20-7 with 4:04 to go in the third quarter.

The Tigers needed a big play to turn the momentum and get back into the game, and they got it from Hudson, who has been a marvel in his debut season as a high-school player.

On a third-and-five play, Crowe tossed a short pass to Hudson, and he raced down the right sideline for a 63-yard touchdown, and the extra point cut Bowdon’s lead to 20-14 late in the third quarter.

“It was just a slant,” Crowe said of that play. “But we’ve got big players who make big plays.”

Bowdon answered with an 80-yard touchdown drive, so the pressure was on the Troup offense to keep producing.

Chanse Hill had a long kickoff return into Bowdon territory, and the Tigers went 45 yards in 11 plays for the score.

The longest play on the drive was a 10-yard run by Russell, and Troup also benefited from a pass-interference call on Bowdon on a fourth-and-eight play.

Glisson called for an onside kick that was unsuccessful, so Bowdon had the ball at midfield with an opportunity to put the game away.

Troup’s defense hadn’t been able to do a thing with Bowdon in the second half, and if that trend continued, the game was going to be over in short order.

When they had to make a play, though, the Tigers made it happen.

On fourth-and-one, Troup made the stop, giving the ball back to the offense with plenty of time remaining.

During a timeout before that critical fourth-down play, sophomore linebacker King Mwikuta said “when we got together in the huddle, coach G said calm down. He knew we could do it.”

“We just had to go out there and execute,” Mwikuta added .”Plays like that, that’s when you bow your back in a game. That’s when you go your hardest in a game. When you do that, and believe, the sky’s the limit.”

On the ensuing possesion, Troup faced a fourth-down play, and another pass-interference call on Bowdon kept the drive alive.

Crowe then had a 10-yard run to the 30-yard line, and the Tigers scored on the next play.

In the Kendrick game, Truitt caught a touchdown pass in coverage, so Crowe knew he could make a play if he got the ball to him.

The Bowdon defender had decent coverage on Truitt, but the senior when up and made the 30-yard touchdown catch to tie the game.

“The defense did their job, and we had to do our job,” Truitt said.

Troup’s final touchdown came with 1:42 remaining, so Bowdon still had ample time to work with, and it started with great field position following a kickoff return to midfield.

Troup’s energized defense was up to the challenge.

After three plays netted just three years, Bowdon quarterback Cason Parmer was tackled for no gain, and the game was effectively over.

Troup lined up in the victory formation, Crowe took a knee, and that was that.

“We couldn’t have done it without coach G,” Mwikuta said. “All the coaches, matter of fact, and everybody coming out here supporting us.”

Troup’s Chanse Hill is congratulated by teammate King Mwikuta after breaking up a pass in the end zone during Friday’s game against Bowdon. Kevin Eckleberry | Daily News

http://lagrangenews.com/wp-content/uploads/sites/37/2016/09/web1_troup32-1.jpgTroup’s Chanse Hill is congratulated by teammate King Mwikuta after breaking up a pass in the end zone during Friday’s game against Bowdon. Kevin Eckleberry | Daily News

Troup’s defense makes a play on Bowdon running back Aaron Beasley during Friday’s game. Among Troup’s players looking to stop Beasley is freshman Kobe Hudson (14), who played most of the game offense and defense. Kevin Eckleberry | Daily News

http://lagrangenews.com/wp-content/uploads/sites/37/2016/09/web1_troup14-1.jpgTroup’s defense makes a play on Bowdon running back Aaron Beasley during Friday’s game. Among Troup’s players looking to stop Beasley is freshman Kobe Hudson (14), who played most of the game offense and defense. Kevin Eckleberry | Daily News

Troup’s defense gets in position for a snap during Friday’s game. Troup’s defense made two critical stops late in the 28-27 win. Kevin Eckleberry | Daily News

http://lagrangenews.com/wp-content/uploads/sites/37/2016/09/web1_troup22-1.jpgTroup’s defense gets in position for a snap during Friday’s game. Troup’s defense made two critical stops late in the 28-27 win. Kevin Eckleberry | Daily News

Carson Wreyford provided the decisive point when he made an extra point late in Friday’s 28-27 win. Kevin Eckleberry | Daily News

http://lagrangenews.com/wp-content/uploads/sites/37/2016/09/web1_troup10-1.jpgCarson Wreyford provided the decisive point when he made an extra point late in Friday’s 28-27 win. Kevin Eckleberry | Daily News