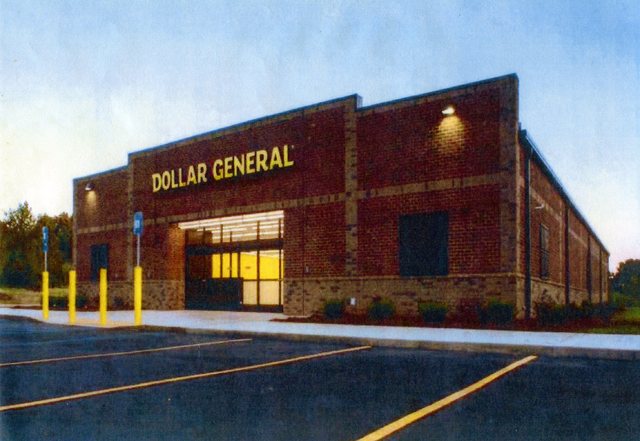 LaGRANGE — The Troup County Board of Commissioners cleared the way for a new Dollar General store on Pyne Road during its Tuesday meeting.

Commissioners approved rezoning 46 Pyne Road to allow for a Dollar General Plus — a larger store than its average locations — to be built on the site along with the adjacent property at the corner of Pyne and Roanoke roads, which was already zoned for commercial use.

The zoning change is contingent upon the developer resolving potential traffic problems at the intersection of Roanoke and Pyne roads where the store will be located.

Ashley Scott, whose home is next to the proposed store, spoke in opposition to the rezoning during a public hearing Tuesday.

“My biggest concern is the traffic on that intersection,” Scott said. “There are already numerous accidents, close calls every day. The sight lines on that bridge are very poor, especially if you are coming out of Pyne Road coming towards Alabama.”

The developers are currently searching for a solution to traffic congestion the store may cause.

“Hopefully this week we’ll get (the Georgia Department of Transportation) out there, and we’ll get the county out there, and will talk about the solutions there to improve that visibility,” Jason Fritz, who represents the potential developer, Sullivan Wickley, told commissioners. “Anything we can do will be an improvement to that intersection as compared to where it stands.”

Scott said she was also concerned about noise from the Dollar General.

“What can we do to … blockade some of the noise?” Scott asked. “… Trucks (would be) coming in to deliver goods, because they don’t come during business hours; they come after business hours, late in the evening. I have a small child. I have several animals, and that’s my concern. They roam free now because it’s quiet. (Currently), there’s not really any concerns. Now that is going to go away for my animals and for my child with a commercial business next door.”

Developers hope to alleviate noise concerns with a buffer of trees and vegetation, as well as a 6-foot-tall fence between the business and residences.

“We are putting in a 50-foot (buffer), it typically has to be an undisturbed buffer,” Fritz said. “What the counties typically do, they have an arborist go out there and tell you, OK, this is not a thick enough buffer, so you put in so many more trees. So that buffer will definitely be planted with trees, mature trees and not little saplings. About 6-, 7-foot caliber trees, thick across that 50 foot buffer, and it will be done per the county’s landscape standards, those plans and standards.”

The buffer is a requirement in Troup County, said County Engineer James Emery.

The store is expected to carry more refrigerated goods and groceries than a normal Dollar General and employ 10 to 12 people. The combined lot size would be slightly more than 2 acres and eventually home to a 10,640 square foot Dollar General Plus, according to the rezoning application.

The store would be the ninth Dollar General in LaGrange.

An example of a Dollar General Plus is shown in an undated handout photo provided by the Troup County planning department. The store, proposed for Pyne Road, would be slightly larger than the average Dollar General

http://lagrangenews.com/wp-content/uploads/sites/37/2016/09/web1_0817DGrender.jpgAn example of a Dollar General Plus is shown in an undated handout photo provided by the Troup County planning department. The store, proposed for Pyne Road, would be slightly larger than the average Dollar General

Man charged with DUI after falling from truck