‘In sickness and in health’ 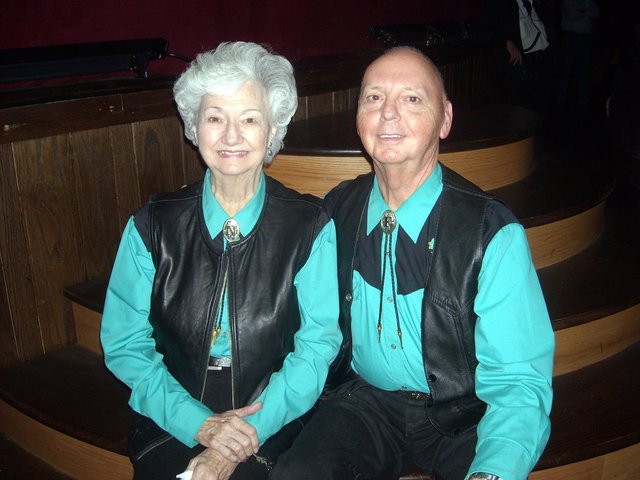 LaGRANGE — For the second year in a row, the five sons of Frank and Nancy Sledge will purposefully stride 2 miles through the Vernon Woods community for the Walk to End Alzheimer’s.

The team of Kenny, David, Phillip, Ricky and Roger, aptly named Sons of Sledge, will be out in force with their families in hopes of finding a cure for Alzheimer’s.

The devastating disease attacks neurons in the brain slowly robbing people of their memory, thinking and language skills, plus cause behavioral changes, according to the Alzheimer’s Foundation of America. It is one of the few diseases for which there is no known cure.

Nancy Sledge started experiencing the symptoms of Alzheimer’s in 2009. She was officially diagnosed with the disease in 2010, said husband Frank Sledge.

Their mom is the main reason sons Kenny, David, Phillip, Ricky and Roger, along with their father, will carry a banner and push Nancy’s wheelchair during the 2016 Walk to End Alzheimer’s.

Sadly, this year Nancy’s wheelchair will be empty. The loving mother of five and devoted wife passed away a month ago from cardiac respiratory failure.

Frank and Nancy were high school sweethearts and dated four years before getting married.

“She was the class beauty,” Frank said with a smile. “And I got the prize.”

The loving couple celebrated their 64th wedding anniversary in May.

Nancy Sledge never entered a nursing home. Instead, Frank and his five sons, along with a daytime nurse, cared for her up until the day she died. The five Sledge sons would take turns spending the night at the family home so Frank could get a good nights rest.

“She was so proud of them. She loved her children,” Frank said of Nancy.

“That (caring for their mom) was not amazing to us. It’s how we were raised,” said David. “That’s the values they (Nancy and Frank) instilled in us. That’s Sons of Sledge, and it’s what were passing on to our own kids. Mom and dad led by example.”

One of the son’s favorite memories of Nancy’s selfless love centered around the family’s round kitchen table.

“With five boys, there were always people coming over … and everyone became her child,” Ricky remembered. “… She loved chicken necks and wings. It took me awhile to figure out why. It was because she wanted us boys to have the best parts of the chicken to eat.”

As Nancy’s memories faded, Frank made sure she was comfortable and knew she was loved. On good days, the couple would sing together and cheer on the Auburn Tigers. On bad days, Frank would sit beside Nancy and hold her hand.

Toward the end of Nancy’s life, hospice was brought in to help care for her in the family’s home.

Although Nancy was not told she had Alzheimer’s until 2010, Frank discovered his wife knew she was sick before even seeing a doctor.

“My family found an envelope in some drawers addressed to me. The letter was dated June 9, 2009. It gave directions to another envelope addressed to me … and in that envelope was $2,000 to help with her medicine and groceries,” Frank explained with tears in his eyes. “She knew … she knew early on what it was.”

“It’s one of the most cruel diseases,” Ricky said.

While Frank and his sons are determined to find a cure for Alzheimer’s, they prefer to remember Nancy before the disease took over her mind and body.

“She had a beautiful smile,” said David. “My mama was beautiful inside and out.”

For Frank, his description of Nancy was simple.

“She was my sweetheart,” he said.

The Walk to End Alzheimer’s will be bittersweet for the Sons of Sledge, but they and their families will soldier on in memory of Nancy. Though her wheelchair may sit empty this year, Frank and his sons know their mom’s spirit will be walking along side them.

“We didn’t lose our mom,” said Kenny. “We know exactly where she is right now.”

“She is in heaven,” David added. “She loved her family and she’d fight tooth and nail for her boys – including daddy.”

“We’re at peace because we know where she’s at and the promise we’ll get to see her again,” said Phillip.

The Sons of Sledge has already raised more than $5,000 for the walk and the Alzheimer’s Association. The family plans to garner more funds for this year’s Walk to End Alzheimer’s – and next year.

“Next year our goal will be to exceed the amount of money we made this year,” explained David.

“We’re thankful to those who give to our team,” said Frank. “But it’s not about us, it about the cure.”

The Walk to End Alzheimer’s will take place on Sept. 17 at the Vernon Woods retirement community at 101 Vernon Woods Drive. Registration starts at 8 a.m., opening ceremonies will begin at 9 a.m. and the walk will kick off at 9:30 a.m.

Anyone wanting more information on the walk, to register or donate visit www.act.alz.org. There is also a link to donate to the Sons of Sledge team and other groups raising money for the Walk to End Alzheimer’s.

For people wishing to donate by check to the Sons of Sledge, make it out to the “Sons of Sledge” and mail it to 99 Meadowland Trail, LaGrange, Georgia 30240.

Nancy Sledge is surrounded by her five sons and husband Frank during the 2015 Walk to End Alzheimer’s in LaGrange. This year’s walk is set for Sept. 17 at the Vernon Woods retirement community at 101 Vernon Woods Drive.

http://lagrangenews.com/wp-content/uploads/sites/37/2016/09/web1_IMG_9433-1.jpgNancy Sledge is surrounded by her five sons and husband Frank during the 2015 Walk to End Alzheimer’s in LaGrange. This year’s walk is set for Sept. 17 at the Vernon Woods retirement community at 101 Vernon Woods Drive.

Frank Sledge lovingly gives his wife, Nancy, a kiss goodnight. As the Alzheimer’s disease progressed, Frank and his five sons insisted on keeping Nancy at home. The sons would each take turns and spend the night at the family home so Frank could rest.

http://lagrangenews.com/wp-content/uploads/sites/37/2016/09/web1_web0906Sledge03-1.jpgFrank Sledge lovingly gives his wife, Nancy, a kiss goodnight. As the Alzheimer’s disease progressed, Frank and his five sons insisted on keeping Nancy at home. The sons would each take turns and spend the night at the family home so Frank could rest.

Nancy and Frank Sledge celebrate their 60th wedding anniversary in 2012 at the Grand Ole Opry in Nashville, Tennessee.