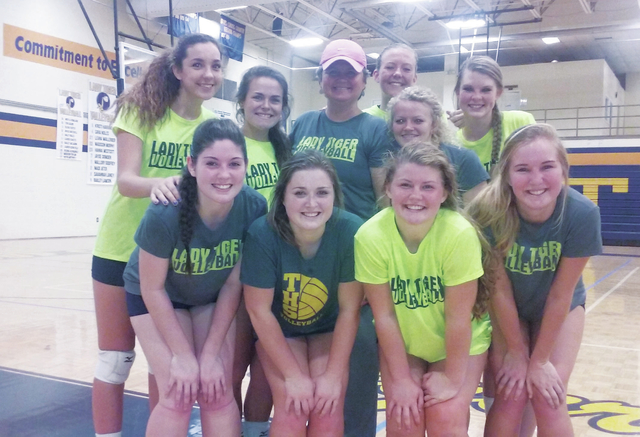 LAGRANGE – It was a two-for-one Tuesday.

The Troup High volleyball team not only got a victory over rival LaGrange, but it was also an area win.

Troup began the day with a close loss to a strong Sandy Creek team, and it then beat LaGrange to even its area record at 1-1.

“We played really good ball tonight, had great ball control,” Troup head coach Jodi Dowden said. “We had very few unforced errors, which is what the game of volleyball is all about. We took care of the ball, and took care of our side of the court, and just played great defense. I was real proud of our area win.”

Sandy Creek, which has been one of the state’s top programs in recent years, had its hands full with Troup.

“We played strong,” Dowden said. “We had great ball control, and didn’t have a lot of unforced errors. They just out-powered us at the net. They’re bigger than we are. We played a great game, though. I really felt like at some points we were even going to pull off the upset. It was a well-played match. It was a good night for us.”

Troup then turned its attention to LaGrange, which also fell to Sandy Creek.

Troup dominated the first set, winning 25-6, and it won the second set to finish off the victory.

“We handled the ball really well, and didn’t fall into that unforced error trap,” Dowden said. “We’ve been working really hard in practice the last couple of weeks on just what we’re about as a team.”

Dowden said Tori Cason, the team’s libero, had a strong game and “helped us out on a lot of defense against LaGrange.”

Dowden also said Bailey Lawson “had a great game defensively and offensively,” and that Jayde Dowden and Lawson were the top servers.

It was the continuation on a strong season for Troup, which two weeks ago won a tournament in Smiths Station, Ala.

“That’s our best tournament that we’ve had this season, and the best we’ve played at that tournament,” Dowden said. “We’ve gotten to the semifinals several times, but never made it quite that far. There were some tough teams that were there from the Alabama side of the line, so it’s always good to see other teams, and play good competition.”

LAFAYETTE CHRISTIAN: Lafayette Christian traveled to Auburn, Ala. and lost to Ballard Christian in four sets on Tuesday.

After the teams split the first two sets, Lafayette Christian was up 25-24 in the third set, but it ended up losing 27-25, and Ballard Christian went on to clinch the victory in the fourth set.

On Friday, Lafayette Christian lost to Skipstone in another match that went four sets.

“They are really battling,” Lafayette Christian coach Rene Gomez said. “I’m really proud of them, because we’re not getting swept by teams, and we’re really competing. We just have to really clean up a lot of the sloppy play.”

Although Lafayette Christian’s record is 3-6, Gomez said “we are playing significantly better than when we opened the season. We’re getting more confident.”

In Tuesday’s match, Emily Stringham and Kaitlin Tucker each had four kills, and Gomez said team captain Abbey Hudson “had a great passing game, and was there defensively. She made some really great saves. It was good to see her have that type of game.”